Uber announced this morning a series of under-the-hood changes to its ride-sharing service UberPool in Manhattan, with the goal of improving its matching algorithms, as well as its pickup and dropoff processes in the city. The company says the updates are based on incorporating driver and rider feedback into its algorithms, and come following last year’s redesign of the service in New York where it began to request riders walk to a particular intersection for a faster pickup.

UberPool effectively offers an alternative to public transportation, like buses, through Uber’s ride-hailing service, but at more affordable rates than its other on-demand options. By sharing the vehicle, Uber can bring prices down for individual customers, which then can lead to increased ridership (and therefore, revenue.)

Today’s changes are more about refining the earlier “walk to the corner” system Uber already has in place, and have been rolled out after listening to the complaints about how the current process was working. Now, Uber says it will better focus on picking the right street corner for riders to walk to – meaning, making sure that correct side of the street and direction come into play. 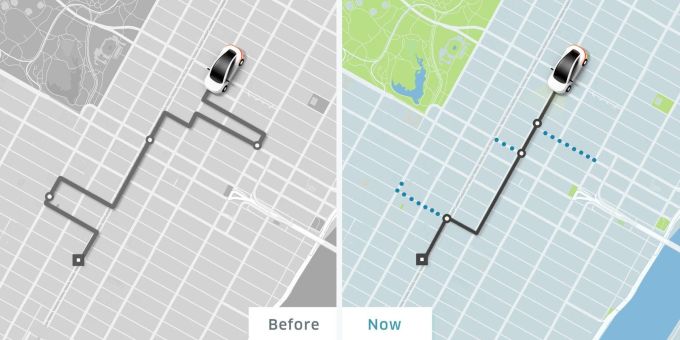 For example, Uber says now that it’s adjusting pickups before the light to be less stressful on drivers, and will choose the corner that is past the light on the right-hand side of the street. This helps drivers pick up multiple riders without having to change lanes, Uber notes.

Uber will also pay attention to the location of bus lanes and avoid picking up there when possible. In addition, it has updated its algorithm to minimize turns – something that can slow down rides and reduce efficiency of the route. The new algorithm has cut turns by 20 percent, says Uber. Alongside this, the algorithm is now matching drivers and riders in a way that’s designed to avoid detours to keep drivers on more direct routes.

Dropoffs are also getting a revamp with the update to UberPool in Manhattan. Now, Uber won’t give riders a drop-off spot when they request a Pool ride, but will instead recalculate the drop-off spot every few seconds as the car nears the destination. This will also keep the route more efficient and will keep the pool moving, says Uber.

While the changes are relatively minor tweaks, they come on the heels of a series of improvements to UberPool’s system, including those to matchmaking and routing rolled out last year, as well as the NYC-area tweaks that required riders walk to a corner. However, they speak the big advantage Uber has in the ride-sharing space – the use of its extensive data set on rides, and its sizable community of drivers and riders to learn from. Uber did not say if similar changes would roll out to other markets, but it’s likely that the company will make city-specific tweaks (if not the exact same ones) to improve UberPool elsewhere in the future.