TV provider Dish Network is today rolling out new technology that will make watching television a hands-free experience, via a new integration with Amazon Alexa. The company says that its pay TV customers using either its Hopper or Wally receivers will now be able to search for programs, change channels, as well as pause, rewind and fast forward television just by speaking.

These options are being made available by way of a new Alexa Skill – a voice-controlled application for Amazon Echo, Echo Dot or Amazon Tap connected speakers.

Once enabled, Dish customers must go to the settings on their internet-connected Hopper or Wally to get a confirmation code that’s used to then connect the Alexa app with their device in the Amazon Alexa app. They’ll also need to pair their device in the app as a final step.

After setup is complete, you’re able to navigate or control your TV through a series of voice commands.

For example, you can search for something to watch by asking Alexa to tune to a given channel or program, or you can seek out content by actor or genre. Some sample commands include the following:

Dish customers will also be able to play, pause, fast-forward and rewind DVR content and live TV (except for fast forwarding, obviously), also just by asking Alexa. And Dish says more features will be released in the future, though the company didn’t delve into details or offer an ETA on those rollouts. 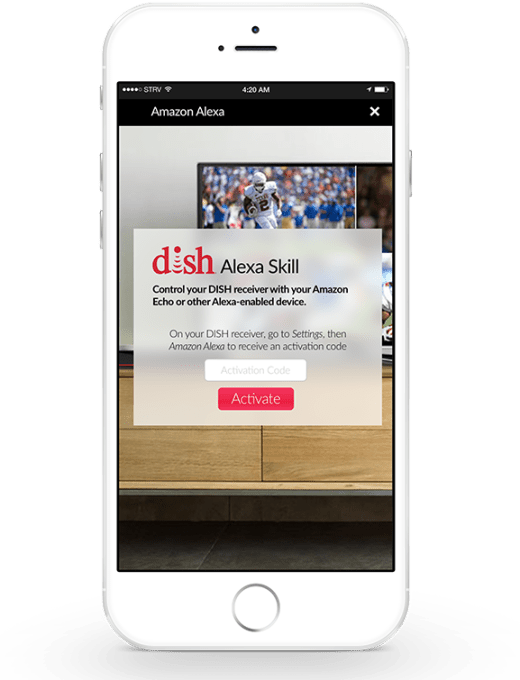 This sort of voice control functionality isn’t exactly a new trick for Alexa – the voice assistant is already able to do much of the same on Amazon’s own Fire TV streaming player and Fire TV Stick, where Alexa is built in. Here, users can tell Alexa to launch apps like Netflix, plus play TV shows, movies, or music, and more. Similarly, other streaming players like Roku, Android TV, and Apple TV also offer voice control and/or voice search functionality, too.

However, this is the first time that a TV provider has offered its own Alexa integration – a move that Dish likely hopes will keep its valuable pay TV customers from cutting the cord and moving to streaming services instead. While Dish offers its own internet TV service with Sling TV, a customer who cancels pay TV has many more options these days, including AT&T’s DirecTV Now, PlayStation Vue, Hulu’s live TV, and YouTube TV.

The cord cutting trend has had a negative impact on Dish in recent months – in the company’s quarterly earnings announced in May, the company said it lost around 143,0000 net pay-TV subscribers in its first quarter, compared with the 23,000 it lost at the same time last year. It now has 13.5 million pay-TV subscribers as of March 31, 2017.

In other words, it’s to Dish’s advantage that it keeps its existing pay TV customers happy – which means, in this case, mimicking the feature set that can be found on modern-day streaming players, while offering something that feels more cutting edge than its rivals.