San Francisco-based Tubi TV has raised an additional $20 million for its advertising-supported streaming service for TV and movies. Investors in the round are betting on the fact that the next big streaming competitor won’t be a direct rival to Netflix and others with a subscription-based business model, but rather a free service that offers a wide variety of titles for free viewing.

The Series B round was led by Jump Capital, and includes participation from Tubi TV’s Series A investor Foundation Capital, as well as Danhua Capital and Cota Capital. With this current round, the company’s total raise to date is $34 million.

Launched in 2014, Tubi TV today has 200 content partners, including Lionsgate, MGM, Paramount Pictures, Starz and others, bringing its catalog of shows and movies to over 50,000 titles. However, not all titles are available at any given time — the selection is rotated and updated to make the content feel fresh.

The company also claims millions of users, and 9x growth in monthly active users in 2016, compared with the year before. 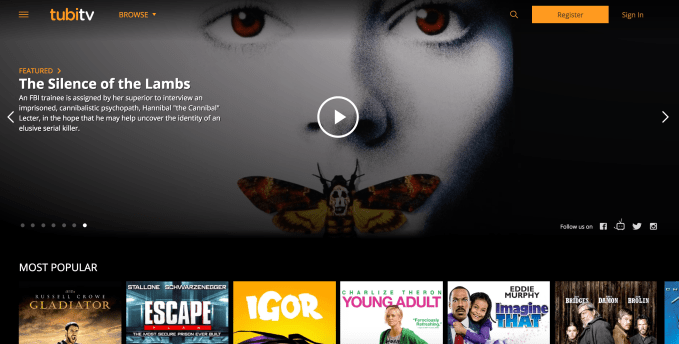 The titles on Tubi TV aren’t necessarily the hottest, or most in-demand new releases, but include a number of big-name hits from years past. For example, the app’s featured selection right now includes the 2000 film “Gladiator,” 1991’s “The Silence of the Lambs,” 2011’s “Young Adult,” 2010’s “True Grit” and 2008’s “Revolutionary Road,” among others.

But for Tubi TV’s targeted audience — millennial viewers — these movies may not be new, but they’re new to them. Younger millennials, for example, were born in the mid-1990s or early 2000s — they may not even have been around when these films were released, or were far too young to watch them. But some of these classic movies hold up over time, and can find a new audience on Tubi TV.

In addition, while millennials are often said to have an aversion to ads, a Nielsen study found that the large majority of them — 75 percent of those 18 to 34 — are fine with ads as long as the content is free. (For a generation raised on YouTube, this is not really a surprising metric.)

Tubi TV delivers on that promise of free content, and claims its advertising is user-friendly, as well. 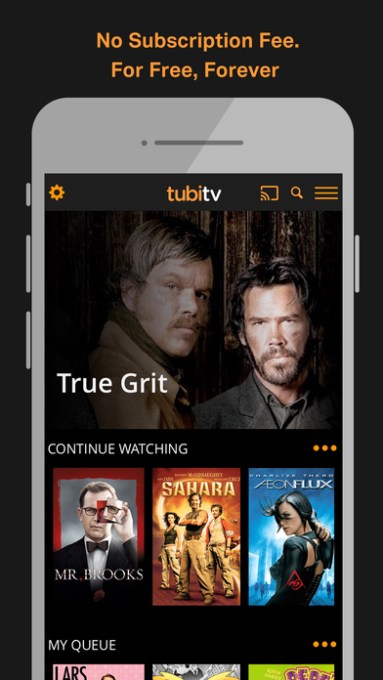 “We care very much about the user experience and strive to replicate the TV viewing experience that viewers are familiar with, but with significantly fewer interruptions,” says Tubi TV founder and CEO Farhad Massoudi. “Typically, we’ll show about 4-5 minutes of commercials for every 30 minutes of content,” he notes.

Some of the advertisers have included Fox, Paramount, Unilever, Nationwide, Pizza Hut, Chrysler/Fiat Group, BMW, Army, Marines, Amazon and Intercontinental Hotels. Ads are priced depending on the campaign objectives, but the company wouldn’t provide details on rates.

Massoudi also says his company is close to profitability, but didn’t offer revenue specifics — saying instead that the round will help Tubi TV focus on growth instead of short-term profitability.

Tubi TV will use the new funds for scaling the business and hiring — including engineers, product managers and data scientists. It will also fund marketing initiatives and its in-house TV analytics platform, which helps to better understand what people want to watch and when.

Tubi TV has developed a custom analytics platform for TV that allows it to A/B test and run deep data mining on “every piece of content, product initiative and ad experience,” explains Massoudi. This technology allows the company to continually optimize the user experience, including content curation and ad targeting.