Facebook is rolling out a new feature called “Latest Conversations” in its search results that will show the most recent public posts about timely topics that a lot of people across its network are discussing. The unit gives you a wider view of what people are saying about a news story or other subject by exposing you to sentiments being expressed outside your social circle.

The ability to see public posts is not necessarily a new thing for Facebook, but this “Latest Conversations” unit is different from what was available previously. Before, when performing a broad keyword-based search on Facebook, the main search results page would display a mix of news articles, photos, videos, public posts, pages, groups and apps (if applicable) associated with the search term.

“Latest Conversations,” however, appears as its own section within the search results and includes a running — and live-updating! — counter showing how many people are talking about the topic right now. 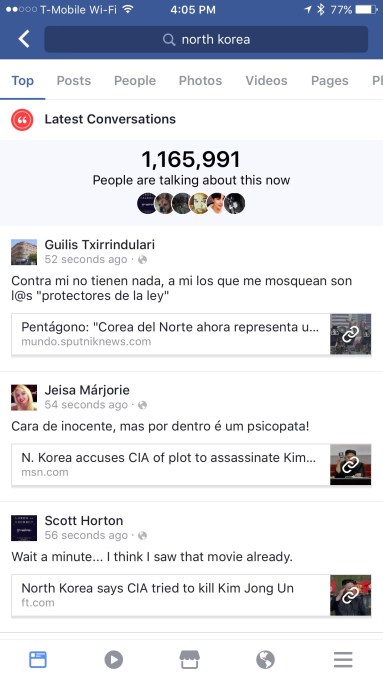 This counter gives you an idea of how widely discussed the topic is on the Facebook network. It’s common to see a subject that more than a million users are actively posting about, for example.

The feature is not exactly an ideal means of understanding the news, or getting a sense of how most users feel about a topic. Often, the posts returned in “Latest Conversations” won’t only be in your native language, and will be from users around the world. (Offering a “translate” button here could go a long way.) 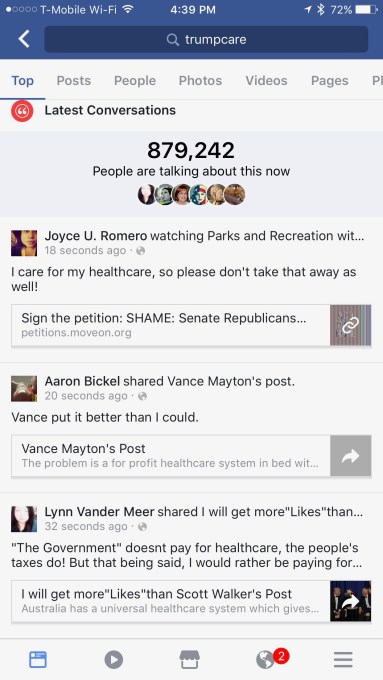 The addition comes at a time when Facebook is trying to pop users’ “filter bubbles” — meaning expose you to views outside of your self-selected network of friends, who often share the same values and mindset as you.

Facebook’s algorithms have become smart enough to know which topics a user wants to see and will engage with, leading the company to optimize a user’s News Feed for those types of posts. But this also means you’re no longer seeing what the opposing side may believe, and that has led to disastrous results.

The company was criticized about the echo chamber it creates following the U.S. presidential election, as it became apparent that users are only shown media and news that reinforced their existing views, rather than informed them.

“Latest Conversations” doesn’t go far enough to pierce through that filter bubble, though. The public posts it returns aren’t ranked in a way that could help you understand what the wider world thinks about a subject, as it’s instead a simple reverse chronological stream of public posts on the matter. 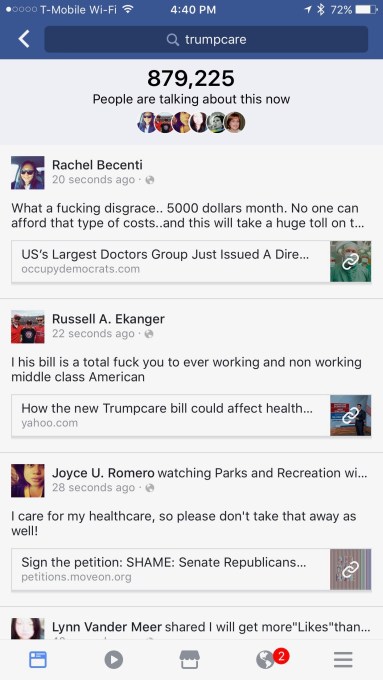 If anything, the feature feels more like Facebook’s attempt to step into Twitter’s territory by allowing users to see a feed of public commentary about a timely subject.

But unlike Twitter, once you’ve clicked through to see the full stream, it doesn’t update with new posts as they come in, the way Facebook’s News Feed does. News Feed will pop up a “New Posts” alert that will scroll you back to the top to see the latest content. “Latest Conversations,” ironically, remains a static page.

To see new posts, you have to tap to go back to the main search results where the unit appears, then tap again on the “See All” link to refresh the screen with the latest posts. That’s odd, given that the post counter at the top of the page continually updates — the expectation is that the stream of posts would, too.

The unit doesn’t appear for all search queries, only those that are seeing a lot of activity at the time of the search.

While the feature feels more experimental, Facebook confirmed with TechCrunch that it’s rolling out to users now. We’re currently seeing it in Facebook’s mobile app, but not on the web.