Late on Friday, Amazon announced it will be shutting down its “Underground Actually Free” program, which offers customers free versions of Android apps that would typically cost money, including those that relied on in-app purchases but were otherwise free downloads. Though it promised long-term support when it debuted back in August 2015, Amazon today says the “Actually Free” program will be fully discontinued in 2019.

Well, to be fair, in the tech world, four years is a long time.

The larger idea with the program was to lure consumers over to Amazon’s own hardware, the Kindle Fire HD and Fire HDX tablets, where the Underground apps were available through Amazon’s built-in Android app store. However, the company also made its Underground apps available to other Android devices through a separate download of an Underground mobile app.

Of course, this app had to be downloaded directly from Amazon’s website, as Google doesn’t allow competing app store apps to be published to its app marketplace, Google Play.

Amazon then footed the bill for these “actually free” apps, but had come up with a novel way of compensating developers. Instead of directly eating the cost of the paid download, or paying for whichever in-game items a customer ended up using, Amazon would pay developers based on how long people used a certain app.

That’s a compensation scheme Amazon had tried before, with its Kindle Unlimited subscription service, which paid royalties to writers based on how many pages people read.

At the time of the initial launch, Amazon said the “Actually Free” program wasn’t a “one-off” promotion, and the company was committed to the program “long-term.” 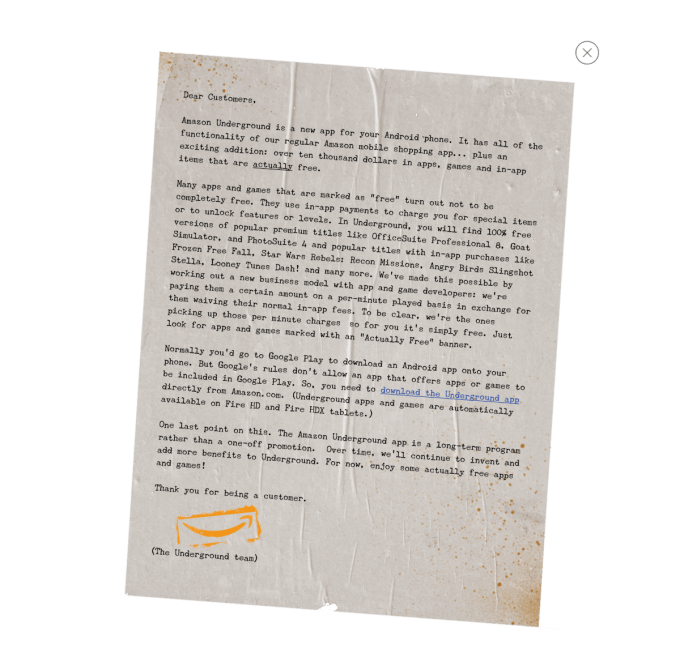 Today, however, that story has changed.

In a blog post, Amazon says it has since enabled new ways for developers to make money for their apps, including through the use of its virtual currency Amazon Coins, and by selling t-shirts featuring their games’ characters and imagery through Merch by Amazon. Beyond the support for these additional revenue streams, the company didn’t give any solid reasons as to why the program needed to be shut down.

“Actually Free” will be shuttered in stages, Amazon says. As of May 31, 2017, the company will no longer accept app submissions to the program, but existing participants will continue to be paid per their developer agreement.

Amazon will then end access to the Underground Actually Free store through its Appstore for Android app in summer 2017. The app itself will continue to function on Android devices, allowing customers to shop for physical goods, watch Prime Video and use their previously installed free apps. (The app was meant to serve as a combination app store and main app for shopping Amazon.)

Fire tablet customers also will be able to use their Underground apps and access the Actually Free store until the program ends in 2019; however, neither the program nor the app will arrive on any new devices beyond those already supported.

Participating developers will still be able to submit app updates, and will still receive royalty payments until the program is discontinued in 2019.

Finally, customers will not lose access to the free apps they already downloaded, though it’s not clear if those freebies will transfer over to newer devices if they choose to upgrade their hardware at a later point.

More details and a way to contact Amazon with further questions is available in a FAQ published here.