Yesterday, Google’s philanthropic arm, Google.org, gave 5,000 high school students across the country a chance to see the smash hit Hamilton: An American Musical. All of this was possible thanks to an $800,000 grant from the company, which worked in collaboration with The Gilder Lehrman Institute to cap off the students’ six-week unit on the founding of America with a matinée of the oft-praised hip hop historical.

I had a chance to meet up with some of the lucky high school students yesterday at the musical’s San Francisco location, where 24 Bay Area high schools assembled to watch the performance. Students across Chicago and New York City also made their way to the musical yesterday.

The phrases “Best play I’ve ever seen,” “Awesome,” and “This was so cool,” were uttered at least a few times each, but the most poignant insights came from high school students who saw the play as a chance to humanize the historical figures beneath the powdered wigs and bonnets.

Much in the way that the immersive qualities of Hamilton and the familiar style of the play’s hip hop soundtrack have made people empathize with centuries-old historical figures, Google is hoping that its virtual reality Expeditions program can cause students to more easily identify with historical events by taking on different viewpoints. 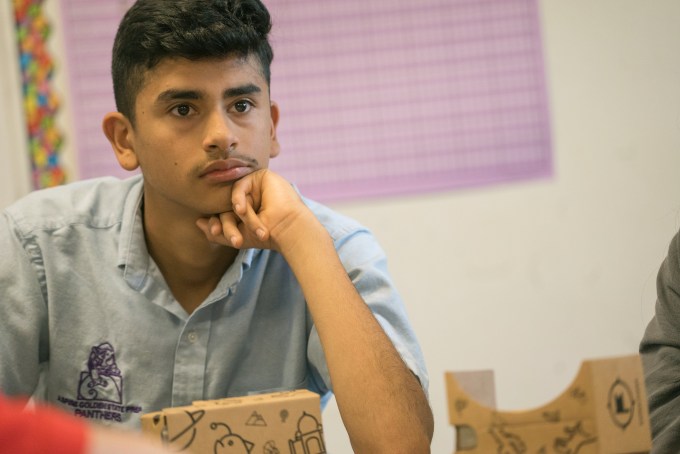 The tours look at hallmark historical moments in America’s history, like the ratification of the Constitution, the Revolutionary War and the presidency of George Washington. The institute is also making a number of rare artifacts and documents available for online viewing on the Google Arts and Culture portal.

The depth of the experiences available in Expeditions are in some ways held up by the technical limitations of the Cardboard platform, but the ability to utilize largely available mobile hardware to do so greatly increases its accessibility for students in classrooms across the country and world.