Mobile applications saw a record number of downloads and revenue in the first quarter of the year, according to a new report from app store analytics firm App Annie out this morning. Across both iOS and Android, downloads grew by 15 percent year-over-year to reach nearly 25 billion worldwide – a figure that includes only new downloads, and not re-installs or downloads from prior quarters.

In addition, consumer spend on apps also grew 45 percent year-over-year in Q1, to reach over $15 billion across iOS and Android worldwide. However, the amount of money developers are making from their apps is even higher than this, as App Annie isn’t including the additional revenue generated from in-app advertising here, or revenue from mobile commerce applications.

In terms of the increased revenue figures, App Annie chalks up much of this growth to China’s impact on the market, and specifically its growth on iOS. The country is currently number one by iOS consumer spend, and the chief contributor to iOS revenue growth. It’s estimated China will remain in that position through at least 2021, the report said. 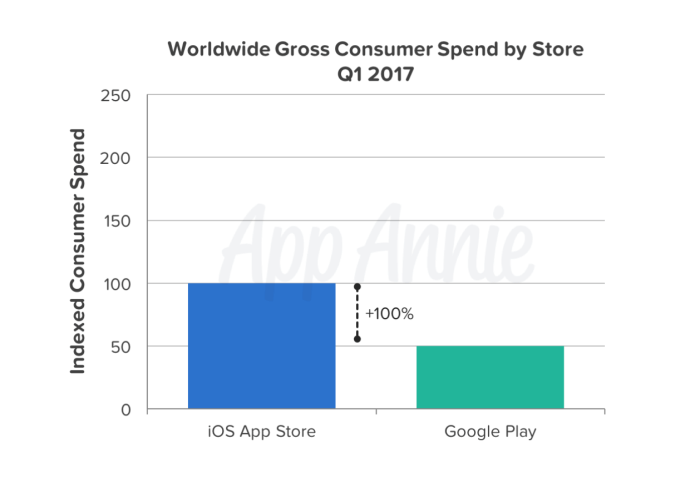 Overall, iOS continues to lead Google Play on revenue – and that distance is growing. Apple’s mobile platform increased its lead to 100 percent over Google Play on this metric in the quarter, up from its 90 percent lead in Q1 2016.

Of course, we know that looking only at the differences between iOS and Google Play doesn’t paint a full picture of today’s app market – as App Annie itself reported last month, Android is poised to top iOS in app store revenue this year, when you count the third-party Android app stores in the forecast. And given the importance of China’s position in the market, you must. These alternative Android app stores – which include marketplaces offered by Tencent, Baidu, Xiaomi, Huawei, and others – are expected to reach $20 billion in revenue in 2017. 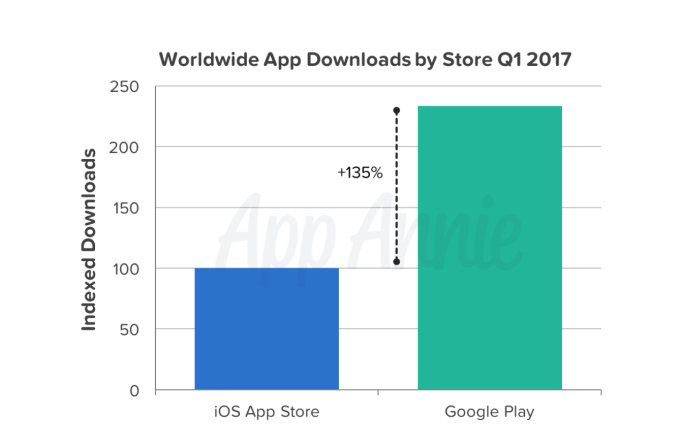 Despite iOS’s lead, Google Play consumer spend did pick up steam in Q1 2017, having shown strong growth of 40 percent year-over-year.

While emerging markets like India had fueled download growth (especially on Google Play), it was established markets that led to the revenue growth. In particular, the U.S. and South Korea saw the greatest growth in market share of worldwide Google Play consumer spend, but the U.S. and Japan saw the largest absolute growth year-over-year.

Several European markets also impacted consumer spend across both iOS and Android in the quarter, including the U.K., Germany and France, which each ranked in the top 10 for consumer spend on both app stores. That’s not a new occurrence, though – App Annie notes this trend has been ongoing over the past five years.