Amazon has made headway in the subscription business with its Subscribe & Save feature for consumers, which offers discounted pricing on products if you agree to buy on a recurring basis. Now, the retailer is looking to expand its subscription footprint with a new program called Subscribe with Amazon, which aims to make Amazon the place to discover, subscribe to and manage a range of digital subscriptions — from streaming services to subscription-based apps, from meal planning services to online fitness classes, and much more.

The service has been in development since last year, and has been quietly live on Amazon’s site for some time. However, it has not been broadly promoted to consumers — something that changes today, with the announcement that it’s open for sign-ups.

Many of the digital subscriptions available on the marketplace were things Amazon was already selling — like news and magazine subscriptions, or access to its kids’ reading app Amazon Rapids or its toy-of-the-month club, STEM Club, for example. But the new portal for Subscribe with Amazon aggregates and organizes all the different types of subscriptions under one roof.

It also offers consumers a single destination where those subscriptions can be managed via an online dashboard. 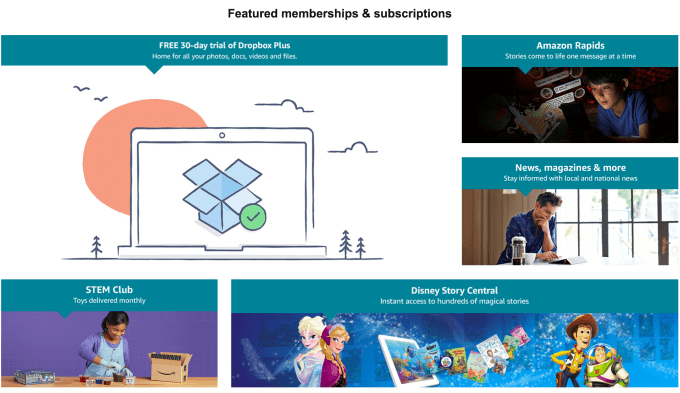 Amazon is also selling subscriptions to publications, like The Wall Street Journal, Chicago Tribune, The New Yorker and Consumer Reports. Others live at launch include Texture, LegalZoom, MileIQ and Tawkify.

Thought not yet available, we understand the subscription cocktail startup Hooch, which offers a free drink a day in bars and clubs in major U.S. metros, will soon be available on the site. Hooch is an interesting partnership, given that Amazon will have to age-verify subscribers as part of the sign-up process.

Hooch confirmed its involvement, and the company offered more insight as to why it would want to participate — beyond the obvious customer acquisition play, that is.

“We think it will be a positive for us because a lot of time our customers don’t mean to cancel, but their credit card expires or they move to a new apartment or different address, and they forget to update their address on Hooch,” he explains. “But people are more likely to have updated payment methods on Amazon, so we think there will be fewer interruptions.”

Anyone who has ever had to update their credit card information across the web can understand this struggle. It’s often difficult to remember the many services you’ve signed up for, and updating each one individually is a hassle.

Amazon won’t universally solve this problem, as it’s unlikely to offer subscriptions to its competitors like Netflix or Spotify, but it does have the potential to bring a number of other digital subscriptions together in a single interface for easier management.

This is an area a handful of startups have been addressing, as well, including Trim, TrueBill and Billy.

For consumers, the Subscribe with Amazon portal functions something like an app store for subscriptions. The different types are organized into categories, like news and magazines, lifestyle, education, movies & TV (which oddly features select video rentals, too), productivity and software and more.

However, the portal won’t be the only way these subscriptions are discovered on Amazon.com. We also understand cross-promotion will take place by tying subscriptions to physical products. For example, if you were shopping for cocktail recipe books, you might see the subscription to Hooch offered as an item you could bundle with your purchase. This will increase the discoverability of the subscriptions on the site by targeting customers who have already shown an interest in a similar product.

For businesses looking to sell subscriptions on the site, Amazon offers self-service tools where they can manage their pricing and take advantage of Amazon’s APIs to receive orders and updates from the Subscribe with Amazon service.

They’re also able to offer potential customers a variety of pricing plans — introductory, monthly, yearly or even Prime member exclusive discounts. (Texture is the first to offer Prime discounts, with 50 percent off six months of its digital magazine service.)

The commission structure is detailed on a page on Amazon’s site (see above), and mirrors the one used today by the Apple App Store. In the first year, Amazon takes a 30 percent cut of the subscription sales, which drops down to 15 percent after the one-year mark.

“Over the years, Amazon has gained extensive experience in the memberships and subscriptions space, innovating across programs like Prime and Kindle Unlimited,” said Lovina McMurchy, general manager of Subscribe with Amazon, in a statement. “Today, we’re excited to extend our selection by offering subscription businesses a self-service way to make their subscriptions available to millions of Amazon customers.”