With updates to its dynamic pricing system, Vacasa wants to offer smartly priced vacation rentals with an algorithm that takes everything and the kitchen sink into account. A self-described tortoise to Airbnb’s hare, the Portland-based tech-fueled property management company argues that automated pricing in the vacation rental market is still pretty crude compared to sophisticated systems in the hotel and airline industry.

Over the last eight years, Vacasa has grown from “one unit on the Oregon coast” to 5,000 units in 135 markets. The company has grown steadily and somewhat quietly from its Portland home base, expanding around the U.S., avoiding the regulatory battles that plague Airbnb and spreading out into Europe, South America and Central America. In 2016, Vacasa picked up $40 million in a Series A round led by Level Equity, the biggest round raised by a Portland company since Puppet Labs also closed a $40 million round in 2014. 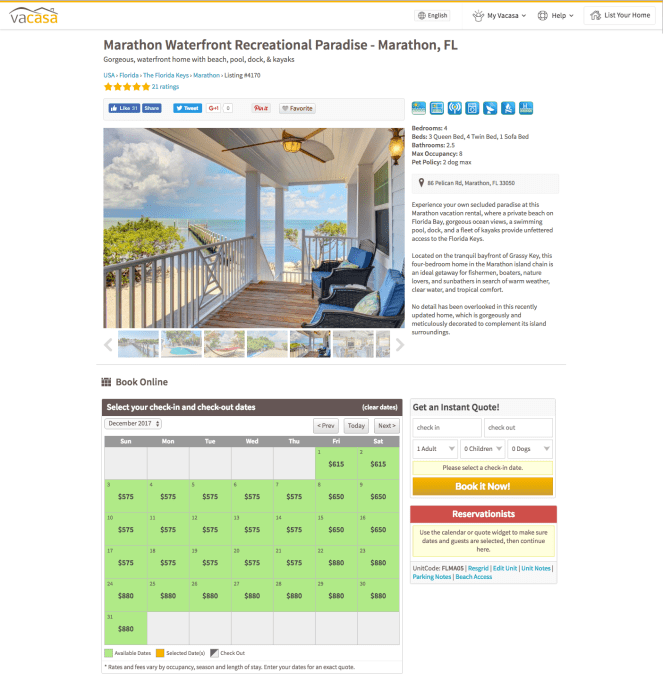 Today, Vacasa has more than 1,000 employees and a prime Portland tech scene headquarters in the 40,000-square-foot office Simple moved out of in late 2016. Aside from engineers and analysts, Vacasa employs a full-time housekeeping staff to maintain consistency and cleanliness across the properties it manages, offering each of its employees a living wage.

Vacasa takes a lot of pride in its pricing algorithm, which it touts as far more dynamic than the pricing schemes used by other vacation rental sites. Initially developed in 2010 by Vacasa chief analytics officer Scott Breon, the company’s revamped Yield Management 2.0 system aims to make homeowners more than comparable systems, leveraging machine learning to leave less money on the table. The newest algorithm hums along in near real time, analyzing market rates, home size, location, luxury classification and local events to determine the dynamic prices that make it a compelling alternative for homeowners used to figuring that stuff out for themselves.

While that’s an obvious boon for homeowners, the dynamic pricing system can leave inventory open when other sites are booked full, which is a plus for guests who might book last-minute. With on-the-ground staff to maintain the homes it manages, Vacasa also can integrate qualitative local information in a way the competition often can’t. “We give our on-the-ground staff a series of tools to help them convey ‘hey there’s this event coming’ or ‘hey there’s this spike in demand coming,'” product lead Travis Green explains.

Most vacation rental systems price a listing by inching it a tiny bit lower than whatever else is available, which means that per-night prices are primarily decided in relation to one another rather than in relation to external factors. Of course, Vacasa’s own recipe isn’t the only show in town — third parties have been offering Airbnb pricing engines for at least a few years now. Airbnb also offers its own smart pricing system, which slides listings up and down within a set of parameters defined by the host. Vacasa’s combined pricing system combines with its core business as a full-service management company, offering a one-stop shop for prepping a space and pricing it to make the most money possible.

More of a tech-powered full-service management company than a platform, Vacasa books about half of its rentals through its own site, with the rest spread across listing sites like VRBO and booking.com. A small percentage even show up on Airbnb, though Vacasa dismisses it as an “insignificant channel” compared to its other listing sources.

For smaller property management companies and homeowners with vacation rental properties, Vacasa makes for an attractive partner. Its yield management math is a big part of that, and the company claims that in 2016 it offered homeowners 34 percent more in rental income than similar pricing systems by competitors.

For now, Vacasa intends to keep its formula in-house. “The core of our model is to keep our systems proprietary,” Breon said. He calls the new pricing system a requirement for Vacasa’s next stage of growth, noting the company’s ambitious but still slow-and-steady five-year goal “to be everywhere where people own second homes.”