Confirming an earlier leak, the Amazon-owned live streaming service Twitch is today announcing an expanded lineup of subscription offerings, which introduces two new levels beyond the original $4.99 per month plan. Now, Twitch’s partnered content creators can offer $9.99 and $24.99 subscriptions that will give viewers additional ways to support their favorite creators.

The new subscriptions will be available as an opt-in beta program for the time being, Twitch says.

News of the new subscription offering had already been circulating thanks to a recent email sent out to Twitch partners.

In it, the company explained how the expanded tiers would work. In Twitch’s world, channels receive a certain number of emotes based on the number of paying subscribers they have, so when people upgrade to the $9.99/month or $24.99/month tiers, they’re basically counting as 2 subscribers or 6 subscribers, respectively. This then allows the Twitch emotes to be unlocked more quickly. 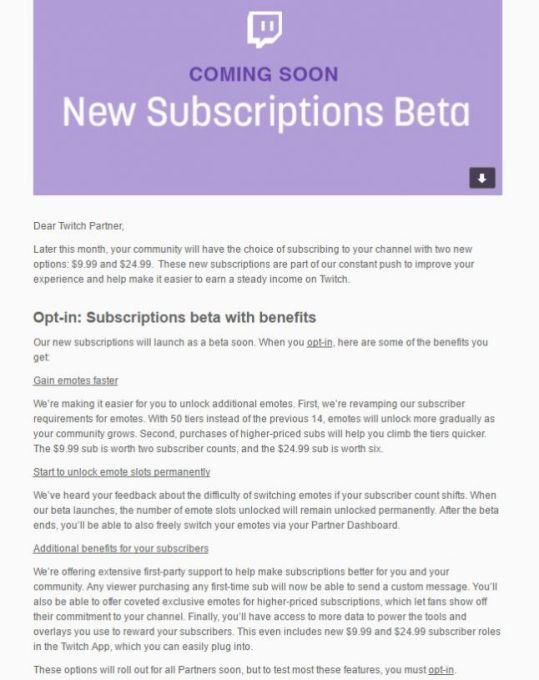 The company also tells us that the new options will also allow other ways for partners to reward and interact with their most passionate fans, including offering them the ability to send a custom message to the community upon first subscribing, and offering participation in the new $9.99 and $24.99 subscriber roles based within the Twitch App, if available.

Partners can also choose to give exclusive emotes to their higher-paying subscribers, Twitch noted. 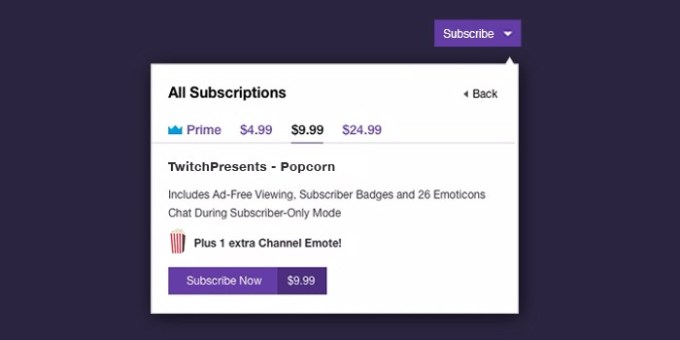 The added tiers could easily become a viable source of increased revenue for Twitch, given that third-party reports have shown that longtime fans are already inclined to spend more money supporting their favorite creators compared with newcomers.

In addition to the beta launch of the added tiers, Twitch said that subscription gifting is also in the works. This would allow users to purchase a channel subscription as a gift, then give it to a non-subscribed users. The time frame for this launch is sometime later this year.

The subscription beta, meanwhile, will launch “very soon” Twitch says, and will roll out to new Partnered channels on a weekly basis. The new options will then be available universally across Partnered channels in the next several weeks.