More than three years after its acquisition of Oculus, Facebook is a product even more deeply intertwined with people’s online identities. Today, Facebook is reaching an important milestone as it launches the first significant integration of social virtual reality into its core product.

With Spaces, those who have bought into the Oculus ecosystem can connect their Facebook accounts and dive into an environment where communication isn’t about chat messages, but voice and avatar body language. 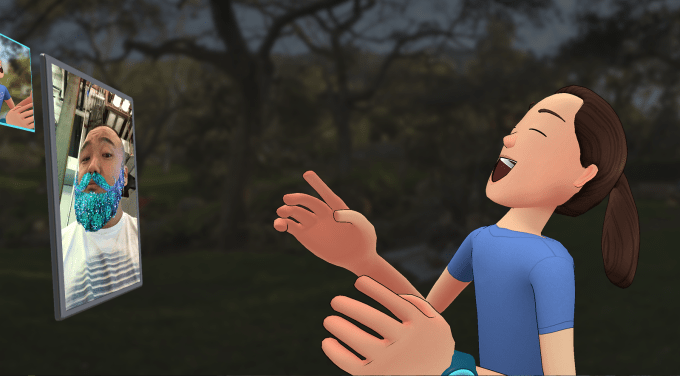 In the app, up to four friends logged-in to their Facebook accounts can join a “space” and chat, draw, watch 360 videos, make video calls on Messenger and take VR selfies of their cartoonish avatars (which it can create for you based on recently tagged photos). It’s all pretty basic stuff focused around having fun at the moment; everything feels quite a bit more light-hearted than the cold, bulky Oculus hardware you’re using to experience Spaces. I had a chance to dive into Spaces for an early demo and it’s clear that Facebook is building this for the masses, even though the masses don’t own a Rift right now. The space is quirky, fun and not taking itself too seriously.

The most noteworthy highlight of Spaces’ release is that it will be launching on the Oculus Rift but will soon be expanding to other VR platforms. “We eventually want to be on all the VR platforms,” Facebook product manager Mike Booth told me. What’s key about this is that Facebook — despite owning a popular VR hardware platform — wants to be a Google in the VR space, not an Apple.

Don’t expect Spaces to be available on the smartphone-based VR systems that you see today. Samsung and Oculus’ Gear VR platform relies on 360 fixed-point movement, which doesn’t lend itself well to expressing yourself in VR. For the Gear VR, Facebook has shown off Facebook 360, an app for viewing 360 photos and videos.

Spaces represents the first .1 percent of Facebook’s vision for Social VR according to Booth, but it’s clear that the app represents a lot of calculation on Facebook’s part.

In a recent earnings call, Facebook CEO Mark Zuckerberg called virtual reality something that won’t see its full potential realized for another 10 years. Currently, there are between 30-50 Facebook employees working on Social VR, but with augmented reality and virtual reality growing central to Facebook’s core product, these teams are sure to grow massive as more people buy headsets.

Augmented reality may be the key to Facebook dominating the next decade of mobile, but Facebook is building something incredibly forward-thinking as it rethinks how people experience deeply human emotions in virtual reality. Spaces is just a first step, but it’s an important one.