Instagram will make its bookmarking feature more useful, the company announced this morning, with the introduction of “collections.” The new feature will allow users to organize the posts they save into private groupings for easier access. The addition may further challenge Pinterest, which also favors image bookmarking and the ability to save items to particular boards.

When Instagram first introduced its bookmarking tool in December, it was capitalizing on an already common behavior across its app – people were often saving photos others had posted. Instagram users would regularly come across posts they want to look back on later – whether a funny video or a great quote, an outfit they like and want to shop, vacation inspiration, a product they want to try, and more.

With bookmarking, you can privately save these posts to your profile so you can quickly get back to them later, instead of downloading the photos to your phone’s Camera Roll where they can get lost.

Since Instagram introduced the bookmarking feature a few months ago, nearly half (46%) of users have saved at least one post, the company says.

With collections, the company now aims to make the feature more powerful. 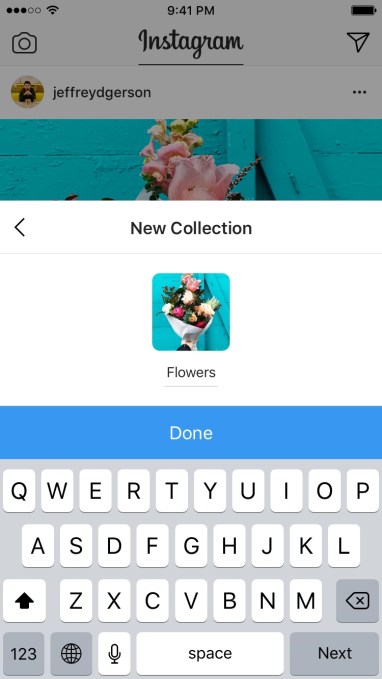 To use collections, you’ll tap and hold on the bookmark icon underneath any post to save it directly to a collection, Instagram explains. You can either create and name a new collection at this time or you can save the post to one you’ve already created.

If you’ve already been saving posts, you can now go back and create a collection with those saves. To do so, you’ll tap in the “plus” icon in the top right corner of the screen, name the new collection, and then select the saved posts you’d like to add – similar to organizing photos into an album on your phone.

Once your collections have been created, you can get to them at any time from your profile. And like saved posts, collections are private – only you can see them. 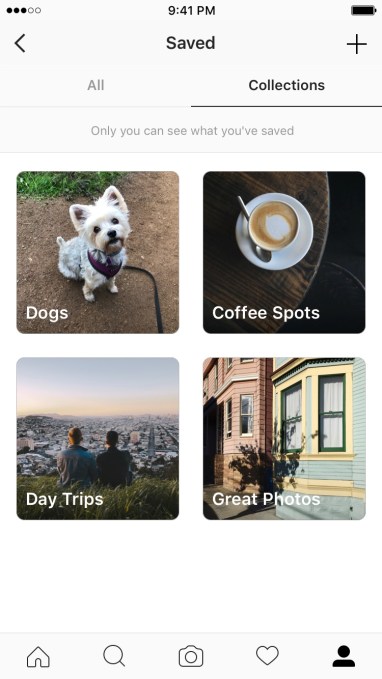 The private nature of collections is the most significant difference between Instagram’s approach bookmarking compared with Pinterest. Your saves on Instagram are meant only for you, while Pinterest encourages its users to create and share images and their organized boards with others as a means of seeding its social network with more content.

That said, Instagram’s bookmarking feature still has a lot of overlap with Pinterest, as Instagram, too, is often a place people turn to for style tips, recipes, travel ideas, craft projects, inspirational quotes and other areas where Pinterest had made a name for itself.

The move comes shortly after another attack on Pinterest last week – but from Google, not Facebook. Google introduced its own fashion “style ideas” right in Image Search, along with an expanded selection of similar items when searching for apparel and accessories.

Instagram says collections are available on iOS and Android as part of the Instagram version 10.16 update in the Apple App Store and Google Play.