At the end of March, Amazon announced it was planning to shut down Diapers.com and all the other e-commerce sites operated by Quidsi – the company Amazon acquired for $545 million back in 2010. However, it didn’t offer any details as to when those sites would eventually shutter their doors. But it now appears the first steps towards closure have been taken – all the Quidsi apps have been pulled out of the app store.

According to data from App Annie, Quidsi at one point had half a dozen published mobile shopping apps across both platforms, including an iOS and Android app for its flagship property Diapers.com, as well as cross-platform versions of the next leading sites, Wag.com and Soap.com. In addition, it also had iOS apps for its less popular sites, AfterSchool.com, BeautyBar.com, Bookworm.com, Casa.com, VineMarket.com, and YoYo.com.

App Annie shows that Diapers.com was ranking on the App Store on Wednesday, which indicates the app was pulled either at a later point in the day on Wednesday or on Thursday. 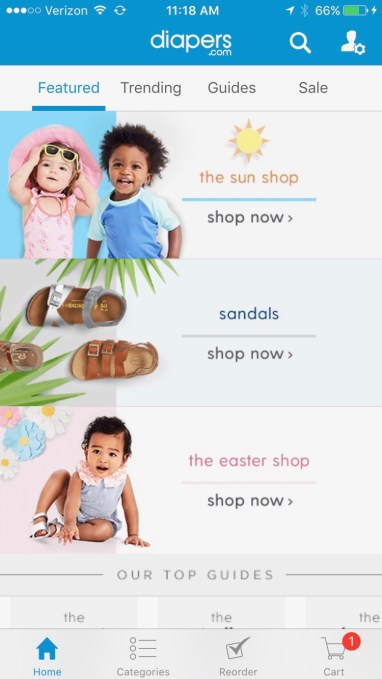 Amazon did not make any announcement about the apps’ shutdown, though it was to be expected at some point.

If you happen to still have any of the Quidsi apps installed, they appear to remain functional – you can browse products, search, add items to the cart, and checkout, as usual. There is no in-app notification that the app is no longer supported. That may come at a later point, though – after all, the websites themselves are still operational, too.

However, by pulling the apps from the app stores, they’re no longer available for download by new users, and Amazon can stop focusing developer resources on keeping them updated or patching them with bug fixes.

Amazon had said it decided to close down Quidsi because it failed to make the division profitable following the acquisition. But some wondered if Amazon’s feud with Quidsi’s founder, Marc Lore, came into play in this decision. After leaving Amazon, Lore founded Jet.com which he sold to Walmart for $3 billion, and he now runs Walmart’s e-commerce operations.

A report from Recode indicated that only months ahead of Amazon’s announcement regarding Quidsi’s closure, execs told staff that Quidsi was expected to reach profitability this year – putting Amazon’s statement about Quidsi’s failures into question.

That being said, none of Quidsi’s mobile applications were doing that well in terms of their app store rankings.

For instance, at the time of Amazon’s announcement, Diapers.com was #257 in the Shopping category on the App Store, per App Annie. The other brands were ranked even lower: AfterSchool.com, Bookworm.com, and YoYo.com were unranked (on App Annie, ranks lower than #1750 aren’t tracked); BeautyBar.com was #1276; Casa.com was #947; Soap.com was #886; Wag.com was #802.

Meanwhile, VineMarket.com was no longer tracked as of March 24, 2017, which indicates it may have been pulled even earlier. And the Android apps hadn’t been tracked by App Annie at all this year.

Data from Sensor Tower indicates that Diapers.com for iOS saw 23,000 downloads last quarter, while all the Quidsi apps were downloaded 32,000 times across both stores during that same time frame.

Comparatively, Amazon’s flagship application is the #4 Shopping app and #46 Overall in the App Store.