The greatest trick Samsung ever pulled was spinning its biggest misfire into a feature. And it happened right under our noses. In fact, not only did the company complete the transformation in plain sight, it used its highest profile platform to do it. Yesterday’s big Galaxy S8 event marked the finishing touches.

Buried deep in the pomp and circumstance of the press conference was the assertion that the Note 7s battery woes, once a PR disaster, were now the foundation of a new feature for the company. What didn’t kill the company had only made it stronger, and the eight-point battery that had been put in place as the company scrambled to put out proverbial fires was now something it could promote alongside its Infinity Display and smart assistant.

It was a subtle shift. One that played out over the course of multiple high-profile press conferences. At both CES and Mobile World Congress, the company set aside time at the top of the event to address the situation. It apologized humbly and promised to do better. In late January, it held a press conference detailing the findings of multiple third-party investigators and outlined its new safety process.

By February, the company started an aggressive ad campaign in the lead up to the S8 announcement. One of the TV spots opens with the worlds “Quality Assurance at Samsung,” set to the percussive intro to the percussive intro to The O’Jays’ 1975 classic, “Give the People What They Want.” The rest of the spot features sexy shots of stress testing set the Gamble & Huff piece of funk-soul populism.

The spot opened the MWC press conference, as the company continued to adjust its approach. Pundits have long tied the release of the company’s next phone to some notion of redemption, and the company has happily complied. In the lead up to the Galaxy S8, the company invited press out to its Korea facilities to watch the safety process in action. The company masterfully married the conversation about safety with boasts about its forthcoming handset.

Yesterday’s event, however, was hosted by a company that had paid its penance and was ready to move on. There was brief mention of the issue, a few final tacit acknowledgements, but the conversation around the battery concerns were largely in service of bolstering these new safety checks. A rep from the company summed matters up well in the lead up to the event, stating, “Some of the key learning takeaways are that as much as we innovate for products and services, we need to do that on safety as well.”

The primary acknowledgement of the new safety standard came well into the press conference, when SVP Justin Denison took the stage to run down a list of the phone’s internal specs. After talking wireless charging, the exec stated, “We are committed to innovation. From hardware to software to core features and accessories that make your life easier. We’re also committed to innovation in quality and safety.” 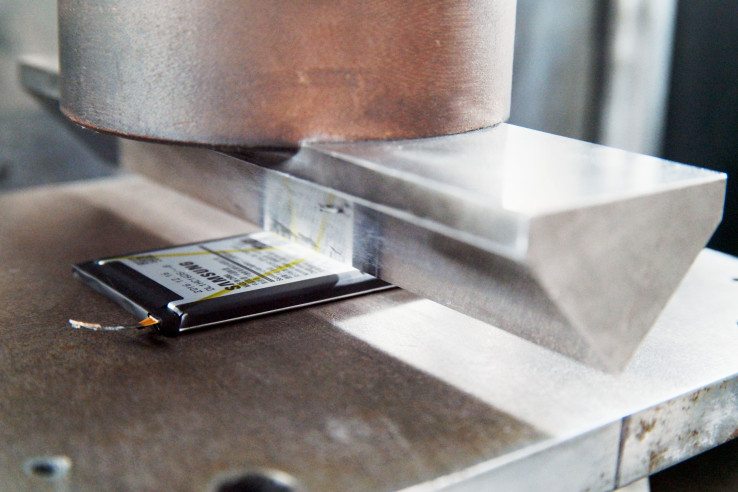 Just like that, the extensive testing that was born as a result of last year’s multiple recalls was the sort of tidbit you fire off in-between specs. “Quality and safety is and remains our top priority,” he continued. “Our commitment to safety extends to security, too.” Just like that, the company had moved onto biometric phone unlocking.

And with that, the company seems to have successfully put the Note 7 fiasco behind it, both symbolically and literally. Aside from some casual explosion jokes and some lingering memories among flight attendants, the company seems to have come out of the issue mostly unscathed. Or, arguably, even stronger than before, adding one of the most rigorous safety check processes in the business to its list of smartphone features.