The MLB.com At Bat and NHL iOS applications have been updated today to take advantage of one of the new, but still under-the-radar features available in the just-launched version of Apple’s mobile operating system, iOS 10.3: personalized home screen icons. That’s right — you now can replace either of these apps’ default icon with one featuring your favorite team’s logo instead.

The ability for developers to offer alternative icons was spotted earlier this year in the beta builds of iOS 10.3, but it wasn’t clear at the time how the technology would be put to use.

Some wondered, for example, if this meant app developers could create icons that continually update with changing conditions — like a weather app that reflected the current conditions, for instance.

As it turns out, the implementation isn’t quite that dynamic. Developers who want to offer personalized icons have to include with their app files they create in advance. Users can then manually choose one of the new icons from the app’s settings or a prompt.

In addition, Apple recommends that user-selectable icons, as these personalized icons are called, are offered only in apps where theme customization is a primary feature.

In a guide for developers, the company explains that icons can only be changed at a user’s request, and the system must always provide the user with a confirmation of that change afterwards. This is a very explicit opt-in type of system, not one where developers could change the icon at will, without an app update. (Developers can update their icons today, but it’s through the traditional app update process.)

The personalized icons also have to be a collection of related images that vary in size, like the primary icon, so there’s consistency throughout the system, Apple says. That is, the user should not see one icon on their home screen, but a different one in iOS’s Settings.

In addition, the icon selection screen — if one is used — has to be designed in a way where it feels like a natural extension of the app. 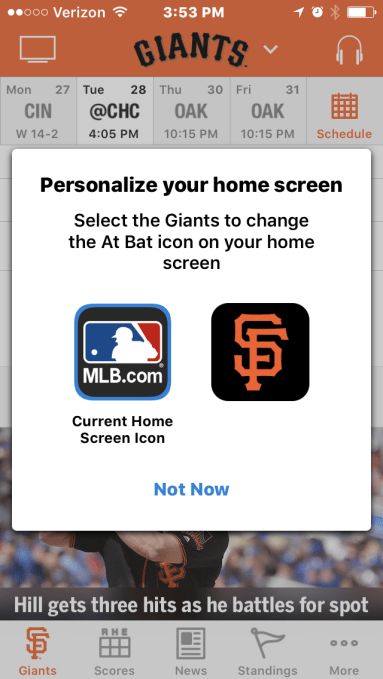 MLB and NHL’s apps are a perfect use case for the new feature.

Already, the apps are focused on helping users get information about their favorite teams. The apps today prompt users upon first launch to customize the experience to their needs by asking them to select which teams they want to follow in the app and through push notifications.

According to MLB, more than 93 percent of At Bat’s millions of subscribers today customize the app’s experience to receive updates about a favorite team’s news, scores, video highlights, tickets and more. 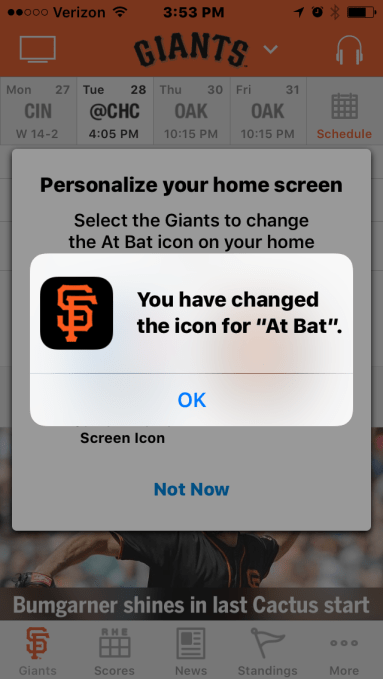 Starting today, that personalization will extend outside of the app for the first time, with the added ability to change the standard icon to one for your favorite team.

Both the MLB.com At Bat and the NHL apps will prompt users to make this selection, but it can also be changed at any time in the app’s settings.

The company behind both apps, BAMTech, is often ahead when it comes to adoption of new iOS features. For instance, MLB’s app last year was among the first to offer the new Split View feature on iPad.

The app personalization feature is available to those who have upgraded to the new version of the apps, as well as the new release of iOS 10.3, which was released yesterday.