Google’s desire for its search engine to become more deeply integrated into the iOS operating system got a big push today – the company says that its previously standalone keyboard app Gboard is now being bundled with its main iOS Search app. This change was announced alongside a handful of new features, including also support for an array of 3D Touch options and a new Google search widget.

Gboard, as you may recall, was launched last year at the height of users’ interest in third-party keyboards for their iPhone. The idea with a Google-branded keyboard app is to bring users closer to search and Google’s other services – especially as users spend increasing amounts of time in social networking and private messaging apps, and not on the mobile web.

The Gboard app offers a variety of tools aimed at enhancing mobile messaging, including the ability to search for emoji instead of scrolling, built-in GIF search, support for glide typing, and voice transcription (which often performs better than Apple’s). It also offers the ability to search Google and quickly send information you find – like weather forecasts, news, videos, images, sports scores, or information on nearby stores and restaurants, for example.

Google says today its Google search app now includes Gboard as a part of its download. The option to enable Gboard will be in the Google app’s settings. 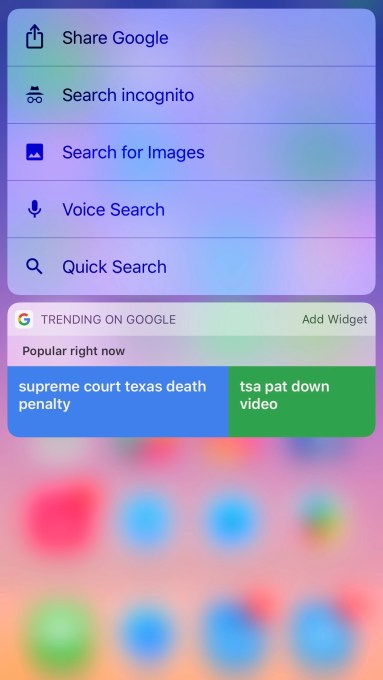 In addition, the Search app update includes a new “Trending on Google” widget that can be displayed in iOS’s notification center. This will feature breaking news and other hot topics based on live trending searches across Google. Tapping on an item will launch the Google app, so you can read more.

The widget can be enabled by tapping Edit from the bottom of the Notification Center or, in a nifty trick, by using 3D Touch on the app icon. (See above).

This will display a preview of the widget along with the option to add it to your Notification Center.

Also available through 3D Touch on the app icon are more search options. From here you can start a voice search, image search, go incognito, and now, a Quick Search option that takes your cursor directly to the search box faster than if you waited for the app’s main homescreen to load.

3D Touch is also now featured throughout the Search app. For example, you can hard press the “G” at the bottom of the screen to start a new search at any time. Plus, you can press on the search results themselves  – including map results and cards – to see a preview of the content.

The features are available in the new version of the Google Search app for iOS.