Adobe is testing out a new product called Fleek, offering marketers a new way to recruit and manage video influencers for promotional campaigns.

Laura Williams Argilla, Adobe’s director of services and workflow for professional video, described Fleek as an extension of the social publishing tools that the company launched (in beta) back in November.

“Trying to solve some of the needs of creators, it was like peeling an onion — we’ll help them publish, help with metadata, help them better understand their platform, but as we dug in, we realized there were a lot more challenges in that space,” Argilla said. So as a next step, Adobe decided to try to improve the way these creators work with marketers.

With Fleek, after a marketer creates their campaign, they can browse a “talent marketplace” of different creators, which includes their reach across different demographic groups and on various video platforms like YouTube and Facebook. They can then reach out to those creators and get contracts signed directly through Fleek. The product will also predict the reach of a campaign based on the creators recruited, and then, of course, report on actual results. 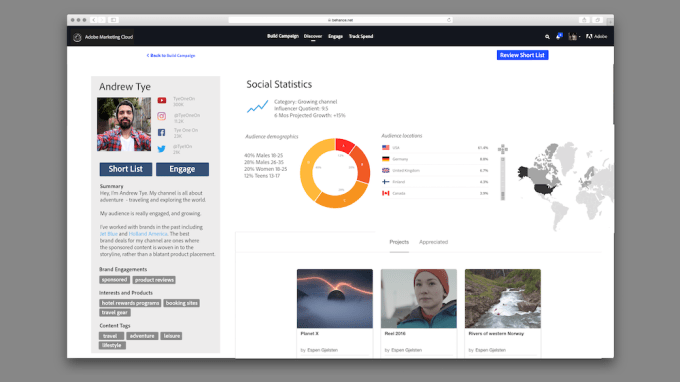 While there are plenty of other places where marketers can try to recruit creators and influencers for these sorts of campaigns, Argilla said one of the big advantages to Fleek is the ability to “engage directly.” That doesn’t mean keeping middlemen like agents or multi-channel networks out of the process, but it does mean Fleek is a place where all the communication around a campaign can happen.

In other words, the goal is to avoid situations where, say, an agent is at home and gets a frantic text from the creator about what link they’re supposed to include in the video, or where a creator is trying to remember whether crucial information was included in an email or a Slack message or something else entirely.

“We’re trying to consolidate that all into one space,” Argilla said.

This announcement comes just a couple of days after Adobe made some big announcements from the stage of the Adobe Summit. This is a bit different — it’s a labs project being tested with a limited group of users, with the eventual goal of bringing a product to market if those tests go well.