As music streaming platforms continue to compete for subscribers, one of the biggest suppliers of premium music video content is adding new features to focus on its own platform as a destination.

Vevo — the premium music video hosting company that sees 21 billion views of its content each month globally from some 300 million consumers, powering more than 40% of all traffic on YouTube in the U.S. — is announcing Watch Party, a new social feature that will let users on Vevo’s own properties chat with each other, as well as queue up and vote for songs in a group playlist, regardless of their locations, tapping Vevo’s catagloue of 275,000+ videos.

At the same time, the company announced a new version of its app that will feature a new set of algorithms to find and play curated playlists.

Vevo’s using SXSW — the tech and music conference on this week in Austin, Texas — to announce the two pieces of news, although neither is coming out just yet. Watch Party will come out by the end of this month, first only for Vevo.com on the web, while the new mobile app is due at the end of next month, April.

Both Watch Party and the revamped app are early steps for Vevo in a bigger strategy to bring more traffic and engagement to its own properties to expand its reach and presence beyond Vevo’s dependency on its YouTube syndication deal for traffic.

Watch Party, the first that will come to market, works a little like the now-defunct Turntable.fm and Soundrop group-listening platforms, in that the idea is to bring users together from lots of locations into virtual “rooms” to listen to music.

Users will be able to search for and add in new tracks to the playlist, and upvote or downvote those from other users. The ultimate say on what gets played rests with the ‘host’ of the room, who can order music or delete tracks suggested by others, as well as help moderate conversations (or not, as the case may be).

It’s worth wondering whether Watch Party will get more traction and succeed where Turntable and Soundrop have failed. One reason I can think it might have a better shot is because Watch Party is part of the very platform that controls the music, rather than riding on top as a third party service and hoping for the best.

Version one of Watch Party, Vevo’s product manager Danny Gallardo told me, is aimed at all kinds of consumers, and it will run with the same kind of ads that you see right now in regular Vevo on its site and on YouTube.

But the idea will be over time to potentially consider how to offer it as a feature to artists, labels and maybe brands to offer more curated ways of listening to, say, a new album, or a selection of music around a particular event, he said. Whether that ever leads to the service being a paid feature has yet to be decided. (One comparable service on that front could be Soundcloud, which offers free and paid tiers both for creators and listeners.)

In any event, creating and rolling out a service like Watch Party could indeed help the company build out more of a dedicated Vevo audience not just on the web, but on mobile and — crucially — TV, where Vevo is hoping to do a lot more in the future across the 240 countries and 14 territories where Vevo’s content is currently viewable today.

Right now, if you want to have a “conversation” (a virtual one) with someone about a particular Vevo video, you have to do that on YouTube. While Vevo has access to that content by way of Google’s analytics, it doesn’t get to capture and keep that social engagement for itself. In building out its own service in today’s market, Vevo’s realised that it needed to start laying the groundwork for this on its own platform, not just for better engagement but as a way to enhancing what it offers users as a service, by way of user-generated playlists.

The app, meanwhile, is yet another iteration on Vevo’s aim to create more of an experience for users beyond basic music video searches.

Today, when you launch the existing mobile apps, you get succeeding screens of videos that you can watch, which are based on your viewing preferences (30 seconds minimum, or 25 percent of the song, whichever is shorter, count towards the algorithm, app product manager Manoasai Eerabathini told me), along with some other small discovery features including small video logs of what’s new. 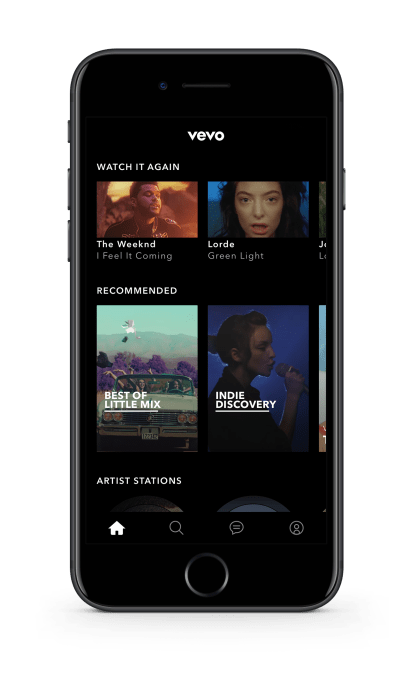 In the future version of the app, pictured here to the right, Vevo will be offering you a more interactive feed that will help with both prompting you to re-watch things you’ve seen before, plus new music based on what you’ve listened to, and artist and genre stations, and more based around specific events, like SXSW.

In this regard, Vevo is doing exactly what it should have been doing all along, which is tapping deeper into recommendation and discovery for those who are not huge music buffs.

Vevo’s two new pushes for more traffic and attention for its own service come at an interesting time for company as it eyes up new business models, international expansion and potentially a new raft of services.

Started in 2009 as a way for music labels to have better control over their video content when broadcast on platforms that they do not own, specifically the then-licensing-problematic YouTube, Vevo today makes its money from advertising that runs before video plays. The company had been working on a subscription service, where people would pay a fee and skip the ads on Vevo’s properties, but in February, its CEO Erik Huggers, said that Vevo had shelved those plans for now.

The company today is majority owned by Sony and UMG, who each have 40 percent stakes, with other smaller shareholders including Google and the Abu Dhabi Media Company (and possibly Warner Music, which finally signed a deal with Vevo in August 2016, but without disclosing the terms).

But that mix could change. Last August (just weeks after the Warner deal was announced), the FT reported that Vevo was raising between $300 million and $500 million from Goldman Sachs for international expansion. We’ve heard nothing about that raise in the last eight months, but there were people from Goldman Sachs’ late-stage investment team hanging around SXSW this week, and perhaps this is still in play. We’re asking around.

In the meantime, there are also murmurs that down the line Vevo could be looking to work more closely with other companies beyond Google. One report from January in Music Business Worldwide hinted that a partnership with Facebook — which has been working hard to grow its own video business as a route to more engagement and more premium advertising — could soon be on the cards.