Driving in a car and listening to music go hand in hand, and now a new partnership between music streaming app Spotify and navigation app Waze hopes to make that experience more seamless in the connected age. The two have teamed up so that users of the Waze app can listen to Spotify playlists from within the app, and Spotify users can continue to get their Waze navigation instructions while in the music app.

The partnership — which will also let you switch between the apps and browse your playlists in Waze, but only when your car is at a complete stop — is rolling out first to Android users globally, the companies tell us. No comment on when it will be turned on for iOS.

The move is an interesting one for a few reasons, starting with usability.

If you’ve ever launched Spotify while also launching a mapping app through your phone in a car, you will know that it doesn’t always work as seamlessly as you’d want.

Occasionally your music drops when the mapping app tells you where to turn. Sometimes, on my iPhone, I’ve seen it default to Apple’s Music player instead. (Google “Waze and Spotify” and you can see some of the problems that people have had.) Creating a more seamless integration will help troubleshoot problems like this.

It will also create a better experience on the screen: Users who are in the Spotify app will now get a short version of the next navigation instruction, while Waze users will get a short description of what they’re listening to, with the option to skip or change the music without needing to open the Spotify app.

For Waze, it’s notable that it selected Spotify first for this kind of integration.

Waze was acquired by Google in 2013 for $1.1 billion, and while Google has its own music service, Spotify is the world’s leader when it comes to the number of users for a music streaming app globally — 50 million paying, over 100 million overall — so this gives it a much stronger strike rate for the integration getting used. 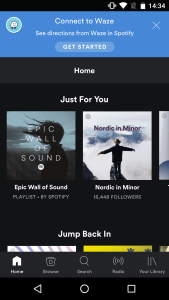 Waze tells us that Spotify is the first and only partner for this kind of app-level integration for now. It will be interesting to see whether Waze intends to add more integrations of music or other services down the line.

More music services, to cover those who use Pandora, or Apple Music, or Tidal, for example… or even Google Play… would be an obvious start, but once you begin to think of other location-based apps or anything else you might do in a vehicle, such as search for a place to eat on Foursquare or Yelp, and you can imagine how these integrations could get very interesting.

In the meantime, Waze continues to expand its ubiquity in other ways.

Last year it launched a new Transport API program that works with with companies like Lyft to feed users of third-party apps notifications of the best turns to take as determined by Waze’s crowdsourced data and algorithms, while in other navigation and transportation-related apps. Waze has also been slowly building out a new carpooling service to add a completely different layer of service to its platform.

For Spotify, working with Waze is the latest move from the company to also increase its usage and usefulness beyond direct engagement with the Spotify app itself. In-car must be one of the most popular use cases for Spotify playlists, where you don’t have to think about and select what you want to hear because you, in theory, should be concentrating on the road. So plugging the gap to be able to access and use Spotify while navigating is a natural (and maybe overdue?) move.

To access the service on your Android phone, you need to have both apps installed, and then you go into the settings for either to turn on the integration.

Updated with more responses from Waze.