Several new iPad models have been spotted being tested in Cupertino and nearby locations, according to mobile marketing firm Fiksu — potentially confirming earlier rumors of a planned iPad refresh arriving this spring. According to reports, a leaked investor note from KGI Securities analyst Ming-Chi Kuo indicated that Apple is expected to update its 12.9-inch iPad Pro model, as well as introduce a new 10-inch or 10.5-inch model with a narrower bezel along with a budget-friendly 9.7-inch option.

Rumors this week point to a possible iPad event in April.

Fiksu’s raw data is showing four different iPad models, but that doesn’t necessarily mean four new devices will arrive. The company says it saw the same number of devices tested before the release of the last two iPad Pros, which means we could potentially see anywhere from two to four new iPads soon hitting the market, it estimates.

The data comes from Fiksu’s tracking and attribution SDK, which is used by thousands of mobile apps today. As part of Apple’s testing process, it installs a variety of apps — from popular ones to the more obscure — which inevitably ends up including some apps that has Fiksu’s tracking in them.

There are only a handful of these devices appearing in its logs, Fiksu found. (See chart below)

All the usage is from the greater San Francisco Bay area, including Cupertino and nearby locations. The usage was also spread across a range of generally popular apps, like games, music, real estate and weather applications. Another indication that these could be the new iPads is the fact that they’re all running a mix of the latest beta of iOS (iOS 10.3) and the unreleased version iOS 11.

The testing began in September, but it wasn’t until recently that the number of devices reached a point where Fiksu became confident that a release date is imminent. 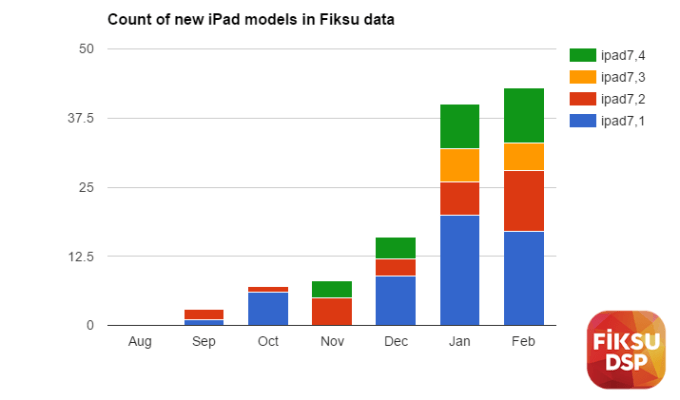 The launch of new iPads is important to Apple, given the current year-over-year decline in iPad sales. As Recode noted in January, Apple sold 13.3 million iPads, according to its recent quarterly earnings report, generating $5.5 billion in revenue. That represented around a 19 percent drop in units sold, and a 22 percent drop in revenue from the year prior.

As Fiksu explains, part of the problem is that people don’t upgrade their iPads as often as they upgrade their iPhones. In fact, the first four full-size iPad generations and the original iPad mini — all of which launched between 2010 and 2012 — still account for over 45 percent of iPad usage, its trackers show.

With the release of new models, Apple could encourage users to abandon their old devices for those with newer technology or new features. Kuo’s earlier note about the devices suggested that the budget model could move more units — potentially between 50 and 60 percent of sales, he said.

Of course, until Apple makes a formal announcement, nothing is for certain.