The idea, as Scoot’s founder Michael Keating explained it, is to allow those in other cities who have vehicles to hook into Scoot’s back-end operation system, allowing them to also run a scooter sharing network in their area.

The startup is offering what it calls the Scoot Mobility Operating System (Scoot MOS) as a white-labeled service to help those who want to operate a similar scooter network get up and running in the same way Scoot operates in San Francisco.

So, instead of seeing a bunch of the red Scoot-branded scooters on the road like you would in San Francisco, where Scoot operates, you’ll see some other brand of scooters motoring about these other cities but utilizing the Scoot system to find their scooters and track with built-in GPS software. 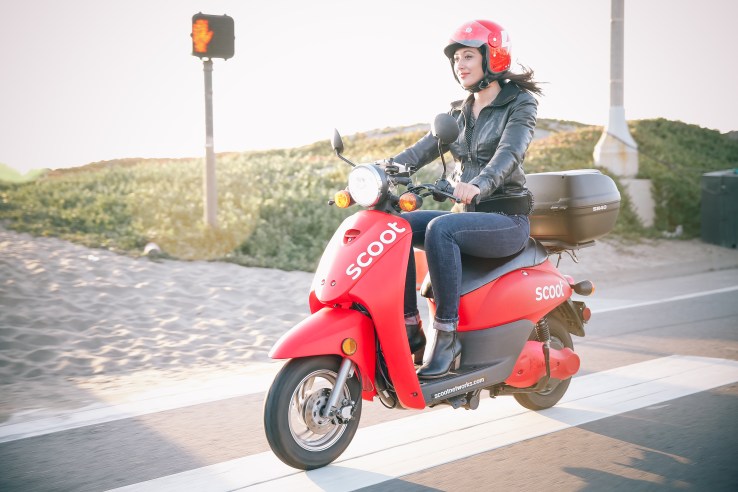 The plan not only helps Scoot expand without the extra burden of vehicle costs, maintenance, parking spots and hiring in each city but also gets the local owners to work with their own governments and regulations to set up shop instead of Scoot worrying about it. In other words, these operations would simply be “powered by” Scoot but operate independently.

It’s not a bad play, as Scoot is going after a pretty big market without dealing with the overhead. Compare that move to the many potential pedal-powered competitors like China’s Bluegogo, Hello Bike, Mobike and others that have already realized the need for something between walking and cars in heavily congested cities throughout the globe. Bluegogo recently ran into regulatory issues when it tried to expand in San Francisco, for instance.

But Scoot’s offering isn’t unique. Loop is a very similar Vancouver-based scooter sharing network offering turn-key operations based off of its own back-end software.

It also seems like it could be easy to replicate a similar program anywhere in the world with a little software know-how and a fleet of mopeds. Meanwhile, it doesn’t look like Loop has cornered the worldwide market just yet, so it may be a good time for Scoot to drive on in.