Streaming music service Spotify announced this morning it has acquired a company called Sonalytic, makers of an audio detection technology that can identify songs, mixed content and audio clips, as well as track copyright-protected material, and aid in music discovery. These features line up with services that Spotify offers, making Sonalytic a natural fit for the company.

Spotify didn’t provide much detail on its plans for integrating Sonalytic with its service, only saying that its audio detection feature will be used to do things like improve personalized playlists and match songs with compositions to improve its publishing data system. The company also teased that users can “stay tuned” for new products that will come to market, thanks to Sonalytic’s help.

London-based Sonalytic, founded last summer, was not a consumer-facing business, but rather offered both a web-based interface for low-volume customers of its technology, as well as an API for larger customers.

It explains on its website that it had developed a next-gen approach to audio identification that’s “robust to changes in pitch and tempo, the addition of background noise, distortion, filtering, compression, looping, EQing and much more.” In other words, a better Shazam.

Even with small sample clips as short as one second in length, its technology is capable of identifying the track — whether chord or vocal, its website claims. And it can be used to identify not just songs, but also musical stems found within derivative works.

That latter feature — finding stems and derivatives — could help Spotify in its music recommendation service, as it would be able to connect different songs that share similar sounds, perhaps.

Meanwhile, the monitoring technology could come into play on Spotify as part of its larger analytics suite for artists, publishers and labels. Sonalytic is able to track the use of material and users’ related listening habits. It even developed technology for use at real-world events, like concerts, which could offer “Now Playing” information to users. (Oh, please, build this one, Spotify).

The company had also developed machine learning-based music recommendation technology that can help find music you like based on user feedback, context (workout, road trips, etc.), and the listening habits of the wider world.

Personalization like this is becoming a key competitive area for music streaming startups, as the better the apps are at making good recommendations of new or undiscovered tracks, the more likely it is that users will return. Spotify has done well in this space, with its “Discover Weekly” and “Daily Mix” playlists, which Apple Music later copied.

But despite competition, Spotify continues to grow. The company recently hit a new milestone of 50 million paying subscribers. Apple Music had announced 20 million in December, for comparison’s sake. 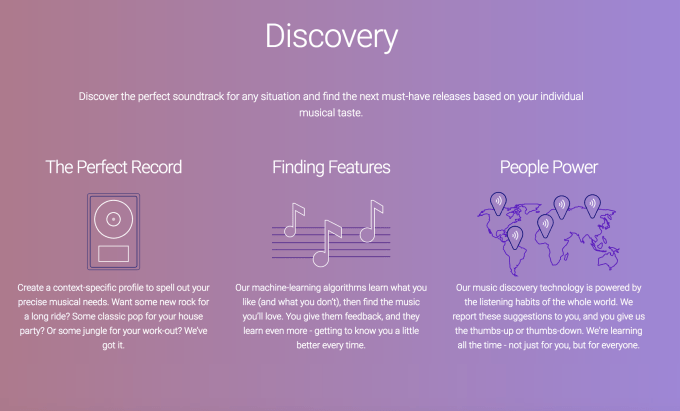 Sonalytic’s founding team consists of Martin Gould, CEO, and Thomas Walther, CTO, according to the company’s AngelList profile. John Atherton is listed on LinkedIn as a Director, as is Benjamin Yarwood, on a business listing website.

Patrick Schneider-Sikorsky, a partner at Beast Ventures, also lists the startup as one of his investments. However, no funding was publicly announced.

John and Ben worked together at Juno Media, while Thomas and Martin met in Berlin a few years ago, notes a blog post about the founding team’s beginnings.

The startup emerged from Imperial Create Lab, which has an undisclosed stake in its business, according to Crunchbase. 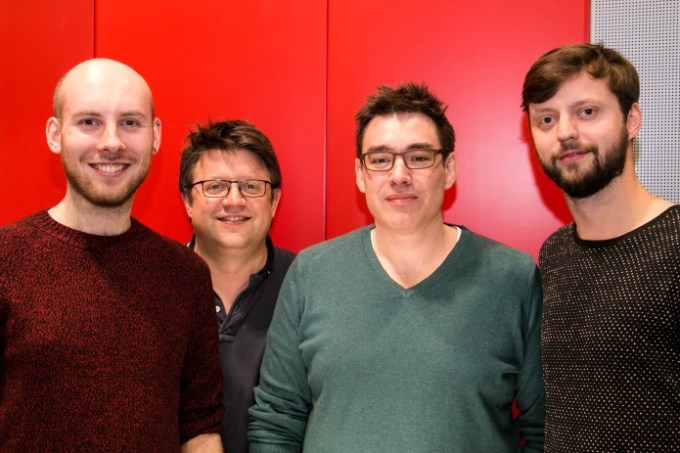 According to a Q&A with the team posted by Imperial Create Lab last year, the startup was inspired to create technology that could aid with the declining revenues in the music business:

Even though people are listening to more music than ever before, the associated revenues have been in sustained decline for more than a decade. Ultimately, artists  —  and particularly smaller, independent artists  —  are losing out, to the extent it’s necessary for many musicians to work a second job to fund their passion. We believe that by helping to monetize music in new and innovative ways, this broken model can be fixed. Music is our passion, and we truly believe that technological innovations can be the solution to this difficult problem.

The startup’s early materials also focused on the speed of its “patent-protected” technology — a hint as to why Spotify wanted to own, rather than partner. (Here is one such patent attributed to the company.)

As for the technology itself, a job posting for Sonalytic claimed that the “underlying audio identification system is built on a highly optimised set of in-memory databases, message queues, and computation workers. It compares half an hour of music per second against a database with millions of tracks — that’s more audio than most of the largest online platforms retrieve per second.”

The company claimed that based on its trials, its “machine-learning method leads the field by a huge margin.”

In addition, a prior post on the Imperial Create Lab website (now removed) reiterated this, saying that Sonalytic had conducted “large-scale trials with several major online platforms, who have confirmed that we far outperform existing identification technologies.”

That list may have included Spotify, it’s worth speculating at this point.

Spotify wouldn’t comment or answer any questions about the acquisition, beyond providing the following statement:

The Sonalytic team has joined Spotify to accelerate our ability to improve the music ecosystem for artists and fans. Their advancements in audio feature detection will be used to enhance Spotify’s personalized playlists, ensure Spotify’s catalog remains spam free, and match songs with compositions to enable faster payouts to publishers.

The startup is one of many acquisitions Spotify has made over the years.