Context is everything. For a long while, the dream for developers and marketers has been to offer information at the exact right time and the exact right place. Achieving that, however, hasn’t been so simple.

For years, Foursquare has been building out the Pilgrim technology, which is essentially a decision-making engine that figures out where you’re going, where you’ve stopped to hang out, and what you might be interested in nearby. This has been running in the background of Foursquare City Guide and Swarm for a long time now.

Up until today, Pilgrim was used almost exclusively in Foursquare and Swarm, with a select few beta partners testing out the tech. But now, the Pilgrim SDK is launching publicly to marketers and developers who want to use this tech in their own apps.

The idea is that any app, from a game to an on-demand service to ecommerce to content, can better serve its end-users by understanding their location. Maybe that means better tracking for Postmates delivery people, or serving up a push notification for a deal when someone enters a retail store, or even changing the difficulty and duration of the level of a game based on where a user is located.

Now, developers aren’t unfamiliar with the idea of third-party location services. In fact, a new company called Radar recently launched out of Expa Labs — coincidentally, the same startup studio helmed by Foursquare cofounder Naveen Selvadurai. Radar was founded by former Foursquare employees, and it offers developers the chance to geofence areas and track users (without PII) to serve up contextually relevant information.

However, Foursquare’s Pilgrim SDK already has those geofences set up in the form of its Places data. More than 11 billion check-ins over the span of eight years has given Foursquare highly accurate, highly valuable data around real-world places and activity. Through these check-ins, Foursquare has developed something they call a probabilistic signal cloud.

This cloud shows the actual shape of places based on signals like Bluetooth and Wifi, but also lets the shapes of these places evolve based on time and date. For example, a coffee shop’s shape might expand between 7am and 11am, whereas it might shrink back down late at night. Conversely, a bar might represent a rather small shape in the morning and expand at night as people begin showing up for their post-work libation.

In a city like New York, the bar and the cafe could be smashed right up next to each other, with Wifi signals that overlap. A marketer for the bar needs to know the difference between a patron of the bar who happens to be smoking a cigarette outside in front of the cafe and someone who’s actually just stopping into the cafe to pick up a muffin. 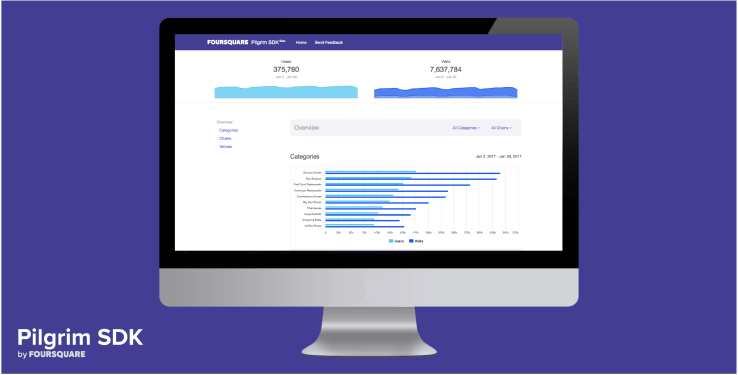 And while we’re on the subject of marketers, it’s worth noting that the Pilgrim SDK integrates with a variety of marketing automation software such as Urban Airship, Appboy, Localytics, mParticle, and others.

This is far from Foursquare’s first enterprise tool. Places by Foursquare is a database/API tool used by companies like Apple Snapchat, Twitter, Airbnb and more than 100,000 other developers who want to integrate location info into their offerings. The company also has Place Insights (for measuring foot traffic trends), Pinpoint (for media ad-targeting) and Attribution (which measures the effectiveness of digital ad campaigns looking to drive traffic into stores).

Foursquare isn’t revealing exact pricing for the Pilgrim SDK, but said that it will be structured in tiers based on the number of users and commercial technology licenses will be negotiable. To be clear, Foursquare will be working with brands and marketers on a one-on-one basis for the launch of Pilgrim SDK, so it’s not a free-for-all like the Places API.

If you want to check out the Pilgrim SDK, you can find more info right here.