There was a palpable energy in downtown San Francisco today as hundreds of tech workers from LinkedIn, Cisco, Apple and other tech companies came together to talk about the plight of the American immigrant under our current administration.

President Trump recently tried to ban anyone from a list of seven Muslim-majority countries from coming into the United States. The Ninth Circuit Court has thwarted those efforts so far, though Trump plans to appeal that decision. Meanwhile, many legal citizens, green-card holders and even those born here have faced scrutiny at the border.

And here in Silicon Valley, that ban and other efforts against immigrants have a greater impact on tech and the economy. Immigrants have been instrumental in building some of the world’s largest tech companies and Silicon Valley feeds on a constant flow of brain power and innovation from people coming from all over the world.

However, Trump is expected to soon take steps to overhaul the rules for the H-1B visa program, a specialized type of visa given to highly skilled workers, nearly half of which go to those working in Silicon Valley. Both fears of a Muslim ban and the possibility skilled workers may face a denial of entry looms large in the Valley, dashing hopes for those wanting to contribute in the innovation capital.

And then there are those already here and working who may have to uproot their lives and families. Though San Francisco maintains its sanctuary city status, tech workers at the rally today also mentioned being scared of what Trump could do to them and their families here, chanting at various times, “No ban. No wall. Sanctuary for all.”

DoBetter, a nonprofit organization that arranged a protest against Palantir last month, was also behind the event today. In addition to today’s protest, the organization plans on gathering stories of Silicon Valley tech workers who are affected in some way because of their immigrant status in the U.S.

The goal is to not just raise awareness, as Silicon Valley seems pretty up on what’s been happening, but to also possibly change Trump’s mind. “Money matters,” one of the organizers of today’s event and Indiegogo engineer Judy Tuan told TechCrunch. “An immigration ban is super detrimental to the workforce.” 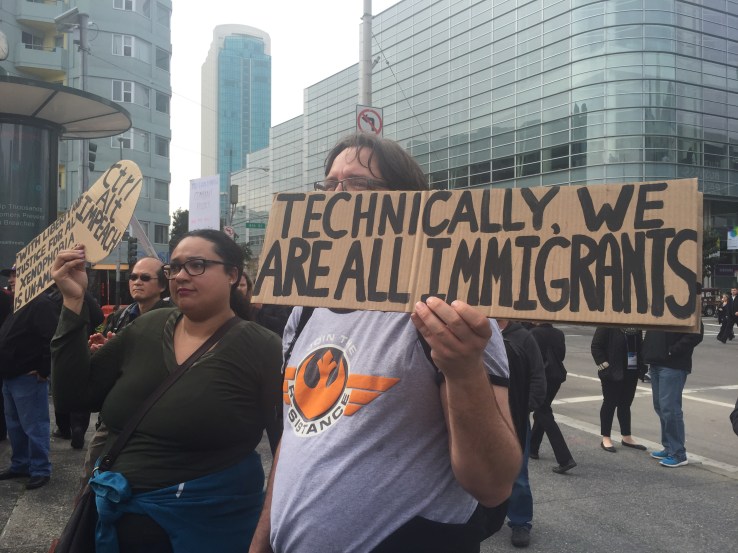 Another tech worker, Isaac Sanchez, who works as a janitor at Apple headquarters just to the South of San Francisco in Cupertino, California has legal immigration status but mentioned his friends who feared retaliation if they spoke out about what has been happening to them.

“We’re all Americans here and if you don’t want to see that you need some geography classes,” Sanchez told TechCrunch through an interpreter.

Though the crowd was loud and most came out to support the efforts, not everyone seemed to appreciate the message. One older gentleman kept yelling “bullshit” in the back of the crowd until those gathered at the rally started chanting “shame, shame, shame” to get him to leave.

Even in the heart of San Francisco, those hoping to change people’s minds on immigration have a lot of work ahead of them.