The FCC giveth, and the FCC taketh away… from itself, apparently. Newly minted Chairman Ajit Pai has ordered the revocation of several reports and investigations instigated by the commission before the turnover to the new administration. Spiking the investigation into zero-rating practices by telecoms is the most serious about-face, but it’s worth noting the other items going down the memory hole, unannounced, on a Friday afternoon.

Pai, in a statement, called the items being revoked “midnight regulations”:

In the waning days of the last Administration, the Federal Communications Commission’s Bureaus and Offices released a series of controversial orders and reports. In some cases, Commissioners were given no advance notice whatsoever of these midnight regulations…These last-minute actions, which did not enjoy the support of the majority of Commissioners at the time they were taken, should not bind us going forward. Accordingly, they are being revoked.

However, that these midnight regulations are being revoked with equally little notice or discussion has a certain irony, not lost on Commissioner Clyburn, who raked Pai over the coals in her own statement.

Today multiple Bureaus retract—without a shred of explanation—several items released under the previous administration that focus on competition, consumer protection, cybersecurity and other issues core to the FCC’s mission…My office requested more than the allotted two days to review the dozen items released today. We were rebuffed. Then, we simply asked to have the Bureaus comply with the reasoned decision-making requirements of the APA. No deal. It is disappointing to see this Chairman engage in the same actions for which he criticized the prior Chairman.

So what did Pai bury today in his midnight revocations?

The zero-rating thing was put to bed with the questionable justification that the FCC was aiming at “denying Americans free data.” The report now has “no legal or other meaning,” even though it never really had one. This revocation at least was expected; zero-rating is a part of the net neutrality debate, in which Pai is vociferously opposed to pretty much everything former Chairman Wheeler did.

The other items are less explicable. The Public Safety & Homeland Security Bureau issued a 56-page white paper entitled “Cybersecurity Risk Reduction” on January 18th that addressed issues from Internet of Things security to reporting outages in submarine cables. It now has “no legal or other effect or meaning.” Why? Is it out of date? Is it somehow biased? The retraction letter gives no indication why this apparently informative report has been rendered officially null.

A second paper filed on the 18th examines progress made in modernizing the E-rate program, which provides discounts to schools for internet connectivity, as a follow-up to orders filed by the FCC in 2014.

Sounds kind of important! Unfortunately, it now has “no legal or other effect or meaning.” Why? Is there another report coming? Is E-rate being abolished, or merged with another program? Was there ever any legal meaning to these recommendations? The revocation order does not say.

A third paper ordered removed is a report on security challenges that might be encountered during the rollout of 5G mobile networks and associated devices. It seems that the report was late, but is that reason for removing it from consideration entirely? Will there be a replacement report? 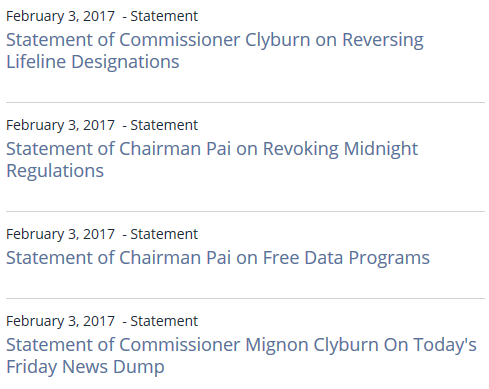 A fourth, shorter report regarding methodology in improving broadband networks was ordered nullified. Does Chairman Pai have his own ideas as to broadband improvement? Was this report redundant?

Last is the “reconsideration” of several companies that had petitioned to be part of the Lifeline low-income connectivity voucher program. Several companies granted permission to be providers in recent weeks had that permission snatched away. This one is more thoroughly explained, at least. Commissioner Clyburn thought it serious enough to warrant consideration before the full committee (it wasn’t).

It seems strange that these serious changes of direction and curious erasures of what seem like ordinary reports were not addressed in the public meeting held by the FCC earlier this week. I’ve asked the commission why they were excluded from discussion and will update this post if I hear back.