Here’s one more app you can delete from your iPhone: that QR code and barcode scanner you only occasionally use. With an update rolling out today, Google’s Chrome mobile browser can do the job instead. The app now includes built-in scanning functionality, which you can access either via 3D Touch on the app’s icon, or you can do a search for “QR” in spotlight.

Though these shortcuts only refer to QR code scanning, Chrome can scan a traditional product barcode as well. Doing so will take you to a Google Search results page for the item in question, where you can check prices, read reviews, and more. 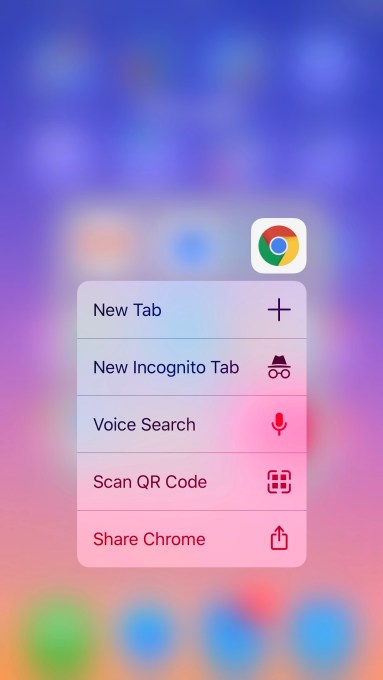 Despite rumors to the contrary, QR codes haven’t entirely died out – if anything, they’ve started to make a comeback thanks to adoption by popular apps like Snapchat, Kik, and Messenger, as well as in food labeling. Even Amazon is putting QR codes on some of its packaging now, as with its Elements brand of baby products.

Still, it’s not the kind of thing you have to do often enough to justify keeping a barcode scanning app on hand.

Because of QR codes’ limited adoption, smartphone makers have been hesitant to fully integrate QR code scanning functionality into their operating systems, even though it would be a simple add-on from the Camera or a search utility. The iPhone’s QR code reader is tucked away inside the Wallet app, for example, where it’s used to scan coupons, boarding passes, tickets and the like. This presumes these are main ways that QR codes are used, but, in reality, that’s a limited subset of what QR codes can do.

With scanning bundled into Chrome, you have a more functional barcode scanner without needing a separate app. The update is out now on iPhone.