Facebook is rolling out a new section on mobile called “Discover People,” which encourages users to introduce themselves by updating their profile, then scroll through a list of upcoming events to see who else may also be going, as well as browse through lists of people in their city or who share the same employer. The feature, designed to facilitate connections between people who aren’t already Facebook friends, could be used for business networking or even dating purposes, given its design.

The company confirmed to TechCrunch that the feature is just starting to roll out to users on iOS and Android, but has not reached 100% of the user base at this time.

“Discover People,” if available to you, is found in the navigation section below Friends, Events, Groups, Nearby Places, and other options. Facebook commonly adds and removes new features here as means of testing user engagement and interest. For example, this is where you’ll find more recent additions, like Offers, Find Wi-Fi, and Send or Receive Money, to name a few. 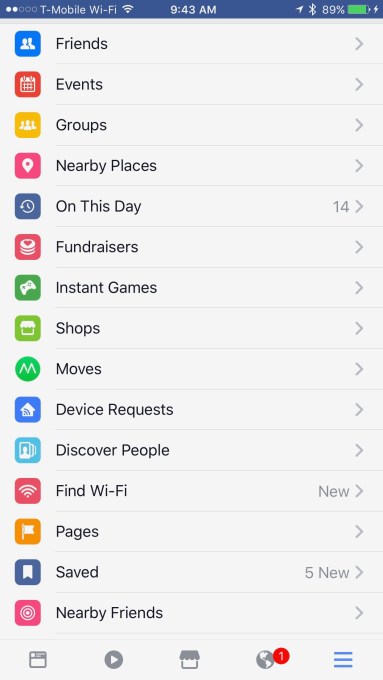 When you tap into the new section, the header at the top asks you to introduce yourself. This involves Facebook guiding your through your current profile to update its various sections. Here, you’re prompted to update your bio and add featured photos to your profile. However, you’re not able to customize an introduction that’s meant to be seen only by those in the “Discover People” section.

Below this, is a list of upcoming events where you’ve registered your interest, have been invited, or plan to attend. These are designated as “People going to…” followed by the name of the event. When you tap into one of these events, instead of being shown the event details, you’re presented with the profiles of the people going, which you swipe through one-by-one. You can also scroll through your past events further down. 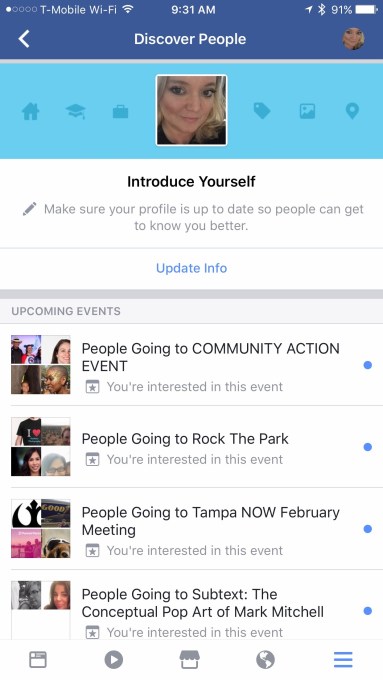 And, at the very bottom of the screen, there are ways to browse through people living in your town or through a list of people who work at your company.

None of the sections will show you the profiles of those you’ve already friended on Facebook, as the feature is designed to facilitate making new connections. Facebook says only public information is shown on the profiles that display here.

There’s a bit of a stalker-ish feel to some of this, given that you’re swiping through the profiles of strangers, in many cases, as many Facebook events are open to the public.

However, the feature would work well for business networking purposes. Or, perhaps, even dating, as it would allow someone to find your profile then tap to message you. The icebreaker, of course, is already available – you’re both going to the same event, after all.

That being said, not everyone will feel comfortable with their profile being used in this way.

It’s already troubling to some that marking yourself as “interested” in a public event is also public post. For a network that has rolled out so many granular privacy settings over the years, not allowing people to control who can see this information is something of an oversight – and a potentially dangerous one for those who may have real-life (not just virtual) stalkers, like women who have fled domestic violence situations.

The new feature is also interesting because is shows that Facebook is thinking about how it can better connect nearby people who share the same interests. The company is often thinking of new ways to bring people together. Years ago it launched “Friends Nearby,” but finally backed away from exact location sharing this December, due to users’ privacy concerns. It also now has a massively popular Groups feature. Along with Events, these can help foster new friendships.

While not explicitly stepping into the realm of dating with “Discover People,” Facebook is likely concerned about the growing number of dating apps inching into its territory. Apps like Tinder and Bumble have begun to develop features that help people find new friends to hang out with, not just people to date, via things like Bumble BFF and Tinder Social.

And when any other social app steps onto Facebook’s scene, the social networking giant soon tries to figure out how to compete.

“Discover People” launched in New Zealand and Australia at year-end, as a limited test. There are some examples of people who spotted this section in the fall, for instance.

Facebook says now that the feature is making its way to all users on mobile.

“Too often, it’s hard to learn more about people around you, whether it is upon starting a new job, joining a new group, deciding if you want to attend an event, or moving to a new place,” a spokesperson explains. “To make it easier, we’re starting to roll out a new bookmark in the More menu called ‘Discover People’ that can help you discover more about people you have things in common with by browsing through profile cards of people in your community.”