Facebook today announced a laundry list of updates regarding its measurement partnership program, including expanded partnerships with Nielsen and comScore, and the addition of a new partner, DoubleVerify. The company also offered details on the status of current integrations, and the launch of a new online portal to help marketers see how their Facebook ads perform, in comparison with other platforms, like TV or print.

The company, in the past, has been taken to task for not offering clear metrics, and, at the end of last year, Facebook announced a series of metrics bugs and errors that led to inaccurate reporting of critical data. By working with third-parties like Nielsen and comScore, which become Facebook partners last spring, the goal has been to ensure that advertisers are able to trust their ad delivery data.

Those partners have been integrating with Facebook in order to measure things like the impression, reach, performance and other metrics advertisers care about.

Today, Facebook says that Nielsen’s Digital Ad Ratings product can now be used to measure reach and in-target performance on desktop and mobile in 8 more markets, which means it now supports 25 markets worldwide.

Meanwhile, comScore, which has already been working with Facebook on viewability verification of video impression, is now beginning to test in-target reach for U.S. audiences on desktop and mobile via its validated Campaign Essentials product, the company says. Facebook explains that this metric is more important to advertisers, because it’s what media plans are built around, and is used to evaluate the campaign’s success.

Several partners, including comScore, Integral Ad Science and Moat, can also now provide metrics on when display ads enter and appear on the Facebook screen, thanks to finalized integrations that were first announced this November. (There’s still some debate about this metric, however, as it’s not the same as the industry standard – 50% of pixels in view for one second for display, or 2 continuous seconds for video, AdExchanger points out).

And Facebook says it has extended its viewability measurement to more placements across Facebook. Initially, this was available only for video on Facebook, but has since been expanded to include Instagram video, and now, comScore and Integral Ad Science can measure video as well.

DoubleVerify is coming on board, too, to support both video and display. When its integrations are finalized, Facebook will have a total of 24 global third-party measurement partners available to advertisers. 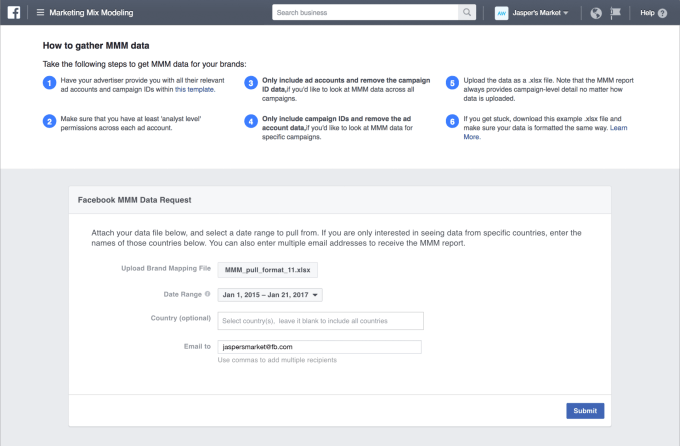 Perhaps most notably, Facebook also launched a Marketing Mix Modeling (MMM) portal online, where measurement partners can gather data directly from Facebook, Instagram and the Audience Network for their clients. Here, they’ll be able to compare which ads – including TV, digital and print – are best helping them reach their desired outcomes. Over 150 brands are already using this information to make their marketing decisions, Facebook said.