A growing number of political activist websites have popped up in recent days to help those opposed to the Trump administration’s policies and agenda to take action. But a new one, 5 Calls, has just launched its simple online tool that makes the more cumbersome process of getting in touch with your representatives a lot easier than before.

The site, created by a team of volunteers, isn’t very fancy, but it’s certainly efficient.

The idea is that if you have 5 minutes to spare, you can place 5 calls – something that’s far more effective in terms of influencing your representatives and getting your voice heard than emailing is said to be.

And, yes, this site has an anti-Trump, left-leaning agenda, but it’s worth noting its creators have open sourced the code. While this was done largely because of the way the team operated – during their free time, from different locations – it places the code in the public domain. And that means others – including those on the opposing side of the political spectrum – could build their own version of 5 Calls, if they were motivated to keep such a site updated.

A glance on the homepage shows you how many calls are needed per action item. Then, when you click on an item, the site offers the phone number(s), the reason why it’s important, and the script to use while on the call. The site is also personalized to your location, if you enter your address or zip code. 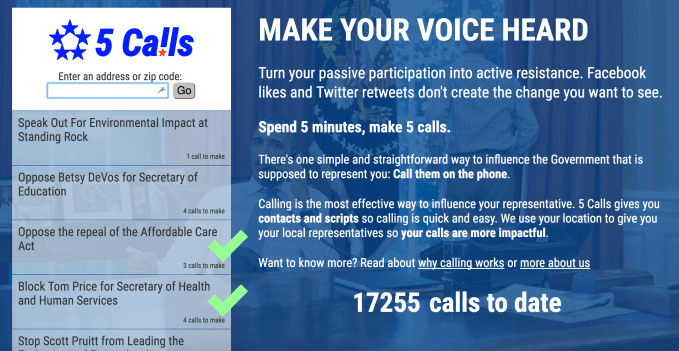 When you’re finished with the call, you click another button to register your call result (e.g. “made contact,” “left voicemail,” etc.). The site will track call results to help them understand the impact they’re having, and where to direct future efforts. However, no personal information about the site’s users is being recorded.

Calls are marked off to-do list style, so you can keep track of what you’ve done, and the site will be updated daily, we’re told.

Since its launch last week, 5 Calls has seen over 20,000 phone calls placed, as of the time of writing, according to the homepage tracker. That number is growing quickly, as news of the site is beginning to spread. 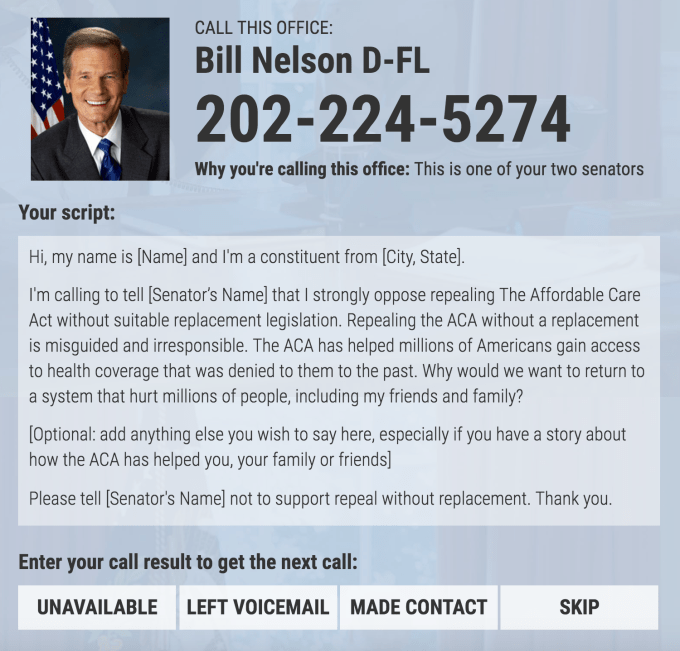 5 calls is a volunteer effort from Nick O’Neill, Rebecca Kaufman, Mike Monteiro, Stewart Scott‑Curran, Liam Campbell, Matt Jacobs, Krishnan Ananth, and others. Kaufman helped with pulling data and other issues, Scott-Curran did the logo, and Monteiro designed the site, while the rest worked on either the front end or backend code.

“We’re a group of like-minded volunteers, mostly friends who met in San Francisco at some point in time, though more distributed around the U.S. now,” explains O’Neill. “This is all side-project, working nights and weekends,” he notes.

The idea came about after he and Kaufman spent the last few weeks of the election working at a Clinton campaign field office. After the election, they felt they needed to do something.

“We knew there were going to be a lot of upset citizens feeling like they didn’t have an outlet for resisting the incoming administration’s plans,” O’Neill says. “Rebecca [Kaufman] drew inspiration from the HRC call tool to think about how we could provide a more general purpose tool for people to get involved.”

5 Calls is another example a growing trend where technologists are coming together to quickly code and launch new services aimed at encouraging political activism – like Track Trump, Call To Action, and Swing Left, to name some recent examples. 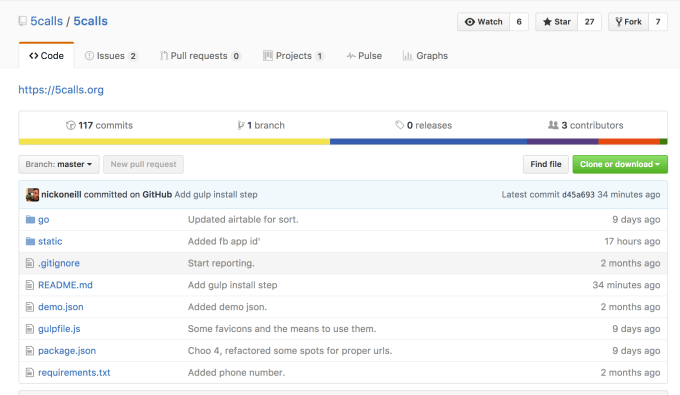 Given that much of the tech community leans left, it’s not surprising to see the rapid launch of so many new resources like this, and specifically those operating in the progressive realm.

As more tools become available, the more likely they’ll be adopted by today’s armchair activists, whose political activism pre-election may have been limited to Facebook likes and retweets.

5 Calls is available on the desktop web and via a mobile-optimized website.