Amazon has just made it easier to repurchase your favorite items from its online store. The company on Thursday added virtual “Dash” buttons to its homepage and mobile app that let you click to buy the product they represent – like diapers, paper towels, medicine, groceries, household items, pet supplies, and more.

Dash buttons, in case you’re not familiar, have been a long-running Amazon experiment of sorts. The original buttons are physical, hardware devices meant to be placed around the home – in the pantry, laundry room, etc. – that you can click to reorder a product you’ve just run out of. Since the program’s launch in 2015, it has expanded to include over 200 brands, ranging from Cheez-It crackers to condoms.

The buttons themselves are essentially free – Amazon credits the button cost back with your first order.

But not everyone wants to scatter their home with hardware devices. That’s where the new, digital buttons come in.

The buttons were first spotted by Recode, which noted that Amazon is also automatically creating buttons for those items you’ve either recently ordered or order often. (A rep confirmed the new program’s details.)

Unlike the physical buttons, you can create virtual Dash buttons for any of the tens of millions of products that are available on Amazon Prime by choosing the “Add to you Dash buttons” option on the product’s detail page.

You can also organize your buttons, delete those you don’t want, and add more from a dedicated Dash buttons dashboard. 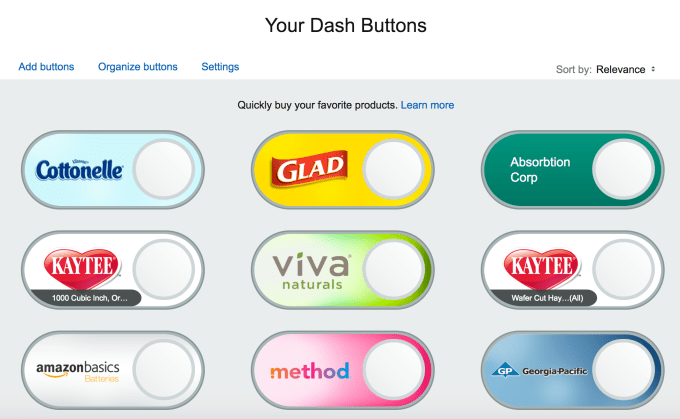 (Some buttons look better than others – clearly, the above pet bedding manufacturer hasn’t opted in)

The move could prompt more impulse buys, given that the buttons will appear for those items you order regularly. And with Amazon’s understanding of your shopping history and repeat order cycles, it may have a good idea as to when to display which button.

Of course, Amazon already caters to the repeat shopper through other programs, like Subscribe & Save, which offers discounts on frequent repurchases, like dog food and diapers. Buttons, however, are more front-and-center, potentially reaching a different type of shopper on the site while also grabbing your attention immediately.

The buttons are live on both the web and mobile, as of Thursday evening.