As the fitness wearables market continues to climb, Lumo Bodytech, a startup making wearables focused on things like running and posture, has decided to further business revenue by licensing its platform.

Lumo, valued at $41 million according to Pitchbook, now plans to open up its proprietary tech stack — including software, algorithms, applications, and hardware — to third parties hoping to cash in on the wearables market.

These third party partners will be able to integrate with Lumo to track health and fitness within products such as clothing, jewelry, and other everyday items. Already the startup says it is working with a handful of larger companies in the healthcare space — though CEO Monisha Perkash declined to provide names for the moment, telling TechCrunch some logistics still needed to be worked out before releasing those details. 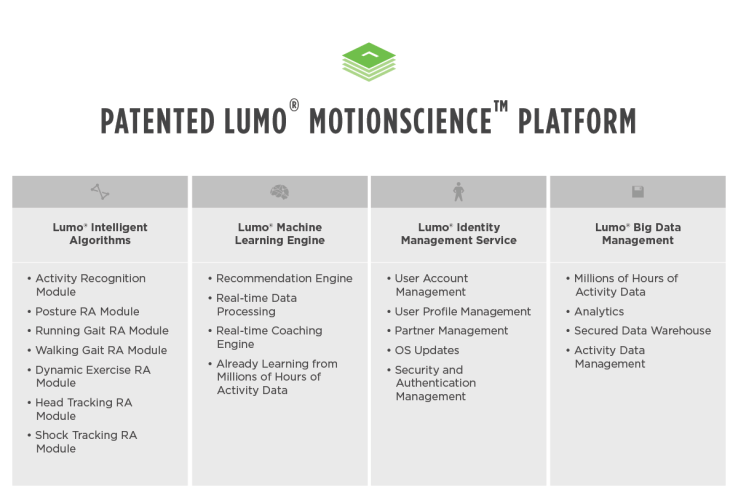 She did, however, mention a number of times that some of the technology provided would be based on fall detection and prevention, particularly for elderly patients. Eldercare is a fast-growing market worldwide, approaching about $400 billion in revenues in just the U.S. by 2018.

Perkash also believes her technology could be integrated into everyday items such as clothing and glasses and that partnering with these larger companies gives Lumo the reach needed to get it to the next level.

“They already have the customer base and the distribution and the marketing muscle and it’s a way to advance our vision to positively impact as many lives as possible,” Perkash told TechCrunch.

Lumo doesn’t see this move as a pivot and says it will continue to create its own products in-house like it has with Lumo Lift, Lumo Back, and Lumo Run.

Each third-party deal will also depend on the company and the scope of what they want and how they want to integrate with Lumo’s technology but it could be anything from just using the algorithm to a full-scale creation of a wearable product.

Third-party licensing isn’t something new in the wearables space. Fitbit partnered with Tory Burch to add its technology to one of the more successful fitness wearable collections and both Ringly and Vinaya — smart jewelry tech startups — also license their tech to third party designers wanting to integrate fitness tracking and other metrics.

Perkash compares Lumo’s move to what Intel does with its technology and even joked a bit about calling it “Lumo Inside.”

“We strongly believe that future wearables will be completely invisible and seamlessly embedded in our everyday lives,” said Perkash. “From the very beginning, our passion as a company has been to give the body a voice, and in doing so, help each and every one of us unlock our full physical potential.