Pundits and Monday morning quarterbacks have spent much of the last two months lost in a fog of speculation and assertions as to what drove President-elect Donald Trump’s victory in early November. Though there are many nuanced reasons that motivated voters to pull the lever for Trump, we also know that for many voters there was something that tugged at them from Trump’s overarching banner of “Make America Great Again.”

Whether it was a general high-level nostalgic feeling they got from the message, or specific sub-components behind the message (e.g. immigration) that appealed to them, they were willing to overlook much along the way. For most, checking the box next to his name was congruent with believing he would get to work on making America great again.

So with that trust (and perhaps even a dash of hope?) from nearly 63 million of the electorate in mind, it would stand to reason that the President-elect would make the most of his couple of months leading up to the inauguration to prepare for, and communicate, what he plans to pursue in the coming days and months to restore that American greatness that was missing.

On one hand, it could be argued that Trump’s lack of press conferences, or for the most part even released official statements (other than last week’s initial, somewhat odd and disjointed press conference), has created a void of information and insight for the public as to what those upcoming plans and intentions are — certainly relative to most incoming presidents. But given the President-elect’s affinity for social media (and Twitter, specifically), you could just as easily argue that we actually have significantly more information and insight into exactly where his focus is, and what may be keeping him up at night, compared to past American transfers of power.

Allowing for a one-week buffer after the November 8 election (which was a relatively quiet social media period for Trump and predominantly filled with election-related congratulations), the President-elect has posted original content 274 times on Twitter since November 15 (excluding retweets). That’s an average of 4.8 times daily, which amounts to a pretty significant number of communications to the general public during the last two months. 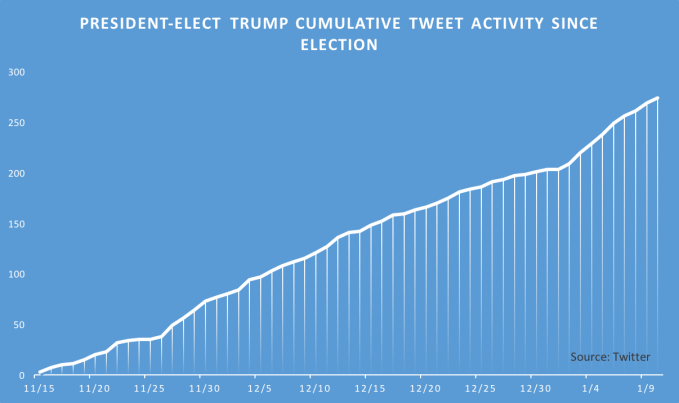 Many have called for Trump to lay off social media since the election (and certainly before the election), including even his own staff; but nearly 60 days later not only is it evident that quitting Twitter is unlikely, these communications seem to serve as the nation’s primary insight into where Trump’s interest has been since winning the election — and the news is not all that encouraging.

Analyzing the content and categories for all of the President-elect’s Twitter activity shows that of those 274 communications, only 36.9 percent of tweets have discussed what could be loosely considered part of one of the following groups: administration planning, foreign policy or domestic policy.

The remaining 63.1 percent of Trump’s communications fall into various groups, such as personal tweets, self-promotion, media attacks, “thank you” rallies, complaints about conflicts of interest and so on. Ironically, the single largest category of tweets since winning the election has actually been tweets about the election itself, which comprises 16.1 percent of all communications. 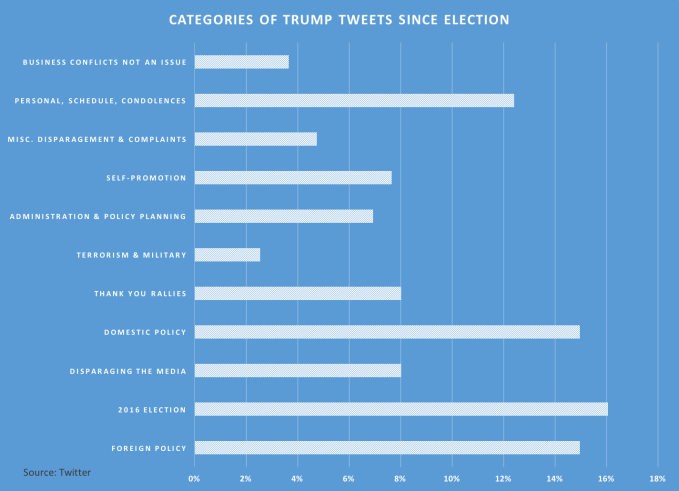 Given Trump’s social media and campaigning track record, maybe this sort of distribution is not a total surprise, but dig in a little further to the individual topics within those categories and the findings become even more telling… at least for anyone hoping to hear from Trump that he is taking the new job seriously, planning, learning and building bridges.

Rolling up into each of those 11 categories are 53 individual topics the President-elect has posted about. To date, Trump’s favorite individual topic to talk about is a statistical tie between communications that disparage the media in some way (particularly the NY Times and CNN), and posts related to his “Thank You” rallies that occurred through a good part of December. Both topics have received exactly 8 percent of his attention each.

Rounding out the top five individual topics are: (3) election bragging/disparagement of Hillary Clinton, (4) cabinet nominations and (5) Russian hacking intelligence disparagement or politicization. All three each came in at 5.8 percent of total messages. 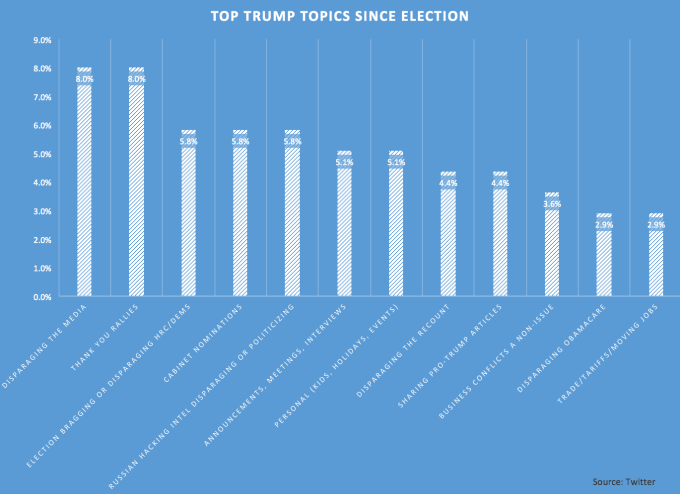 Conspicuously, topics that Trump cited repeatedly during the campaign as crucial and problematic (job creation, military, immigration and terrorism) have only received a combined total of seven tweets (2.6 percent) throughout the last two months — the same exact amount of attention he has dedicated to disparaging Saturday Night Live, Meryl Streep, President Obama and Vanity Fair (2.6 percent).

Also, arguably receiving some disproportionate attention and focus from the incoming president: tweets either supporting Putin and Julian Assange or denigrating Arnold Schwarzenegger and the Hamilton cast combine to total 3.6 percent of all Trump posts — more than the combined amount of communications to the public on China, North Korea, Syria and the UN (only 2.9 percent).

Looking beyond Trump’s most favorite topics, which tend to be self-serving and self-promotional in nature, there are administration or policy related topics that do frequently receive attention, perhaps providing a hint as to the areas he may care about most once he takes over later this month. At the top of that list have been tweets related to setting up his cabinet (5.8 percent), but Trade/Tariffs/Moving Jobs and Obamacare have both received meaningful attention at 2.9 percent each, suggesting those two areas may be his first order of business come January 21.