Sometimes the end justifies the means. Other times it clearly doesn’t. But in the new bizarro world that is the modern-day U.S. political climate, increasingly the means has become the new end itself.

Currently taking center stage for this phenomenon is the now notorious border wall. President Trump is insisting we need a border wall; Democrats of course insist we don’t.

The better question here might be a border wall for what end-goal exactly? What problem is the wall supposed to solve and would it actually do the job? If you wade through the president’s soundbites and campaign rally chants around illegal immigration, the answer would seem to be we should erect a wall to deal with the growing crime and drug issues flooding into our nation at the hands of malicious illegal immigrants. The bad hombres if you will.

In fact, we’re told by the president that the invasion on our border has become such a dire issue that it’s a crisis worth shutting down the government over, leaving a trail of 800,000 American families as political pawns along the path of this game of chicken. But is there really a historic attack on our borders of would-be criminals looking to raid America?

During a recent trip to Rio Grande, Texas, which sits at the border of Mexico, the president remarked that we have never seen so many Border Patrol apprehensions “ever in our history.” Fortunately, for our dedicated border patrol agents, who incidentally under the shutdown are no longer getting paid, that statement is not at all true.

A look at the actual apprehension data from the Department of Homeland Security tells us just how rudely inaccurate the comment was. Turns out border apprehensions have fallen by a pretty staggering 76 percent from their peak of 1.67 million back in 2000. In fact, the last several years have seen apprehension figures drop so significantly they now match levels not seen in nearly 50 years. 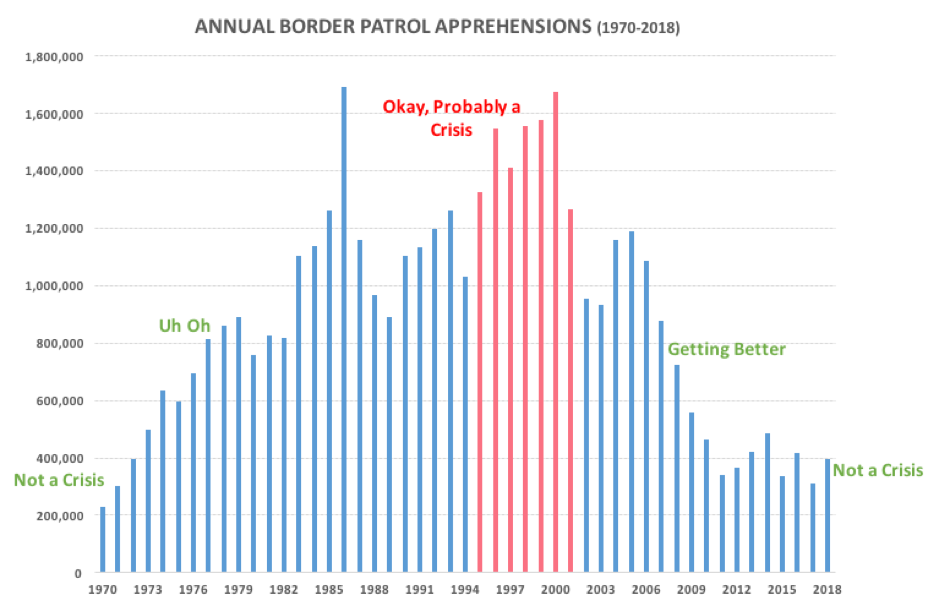 Driving the massive reduction in apprehensions back to early 1970’s levels were a few key changes: (1) A tripling of border patrol agents from around 6,000/7,000 levels in the late 1990s to north of 19,000, (2) investment in a “virtual fence” of mobile and fixed surveillance technologies (radar, drones, sensors, mobile and fixed cameras, night-vision goggles, etc.), which agents have called a “game changer,” and (3) some targeted fencing courtesy of the Secure Fence Act. These investments (along with an improving Mexican economy) seemed to have had the desired effect, driving down border apprehensions dramatically from their chaotic peak. 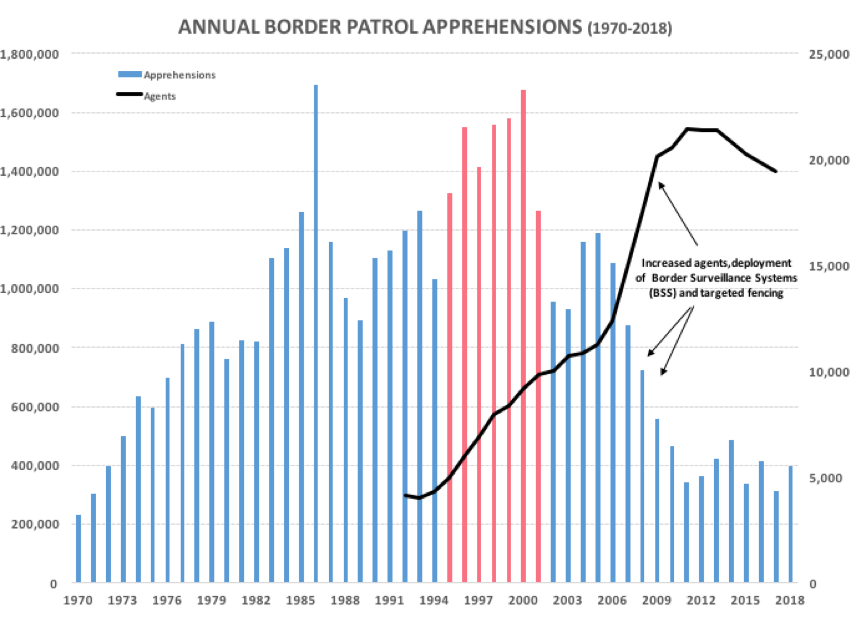 But, wouldn’t fewer apprehensions mean more illegal immigrants must be getting through the border? Why would lower apprehensions also mean lower “invasions” of illegal immigrants? Well, because intuition and the U.S. Customs and Border Protection (CBP) tells us so. According to the CBP website (which is a division of the Department of Homeland Security): “It may seem counterintuitive, but high apprehension numbers are evidence of a border out of control, where there are few barriers, real or perceived, to entry into the U.S. High apprehensions are seen as evidence of low deterrents to violate U.S. law.”

Further validation of this comes when you examine annual apprehensions per Border Patrol agent, per year. If we had just doubled or tripled agents and they were still being overwhelmed at the same rate they were in the 1990s or early 2000s, we might have a true national crisis on our hands. On the contrary, in 1993, Border Patrol agents averaged 313 apprehensions per agent during the year, but in 2017 that figure had plummeted to just 16 border apprehensions per agent — a 95 percent reduction we’ve likely never taken a moment to either recognize, or tie back to the previous border security investments that were made. 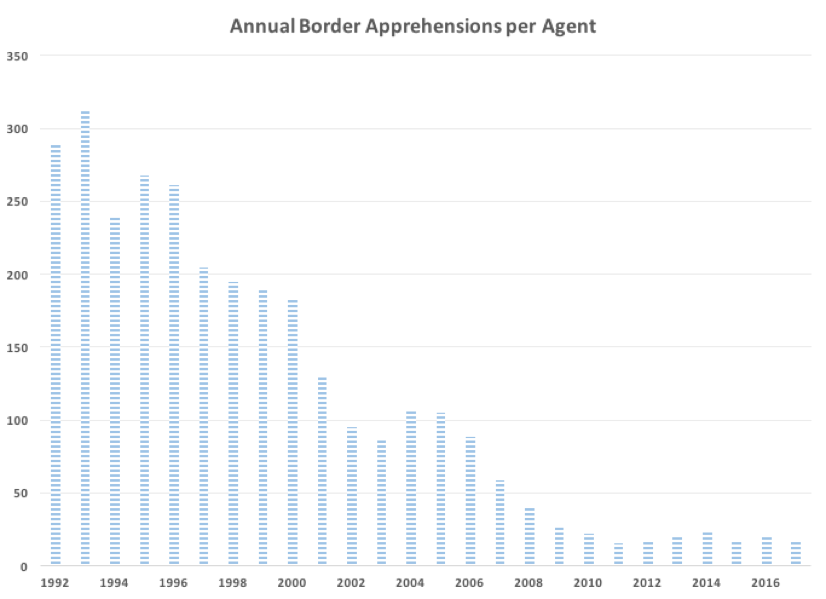 If apprehension data can be taken as a reasonable barometer for illegal immigration activity, and illegal immigration activity has dropped significantly over the last several years, then you might even expect to see a leveling off of the growth of undocumented immigrants already residing within the U.S. The most recent data from Pew Research (generally recognized as the best at tracking this) confirms just that, suggesting that the number of undocumented immigrants in the U.S. not only peaked around 2007, but seems to be in a gradual decline since then, dropping from 12.2 million to 10.7 million. This makes sense given the apprehension data above. 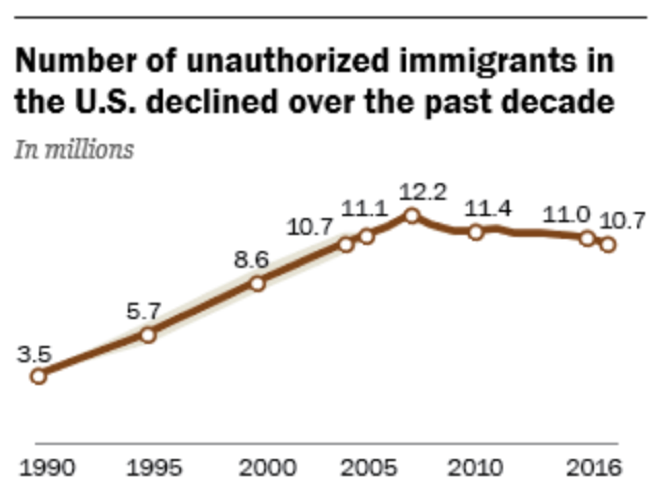 But even if illegal immigration is in significant decline, and the total number of undocumented immigrants living in the U.S. is also declining, then the goal of the wall must presumably be to keep out the abundance of murderers, rapists and drug smugglers that the president has frequently reminded us are pouring across the border and committing crimes at alarming rates. The challenge here is that appears to also not be the case. Though the majority of heroin and other opioids abused by Americans do originate in Mexico, the president’s own Department of Justice confirmed in 2018 in a 164-page report that only a small percentage of these drugs are seized outside of legal Ports of Entry (e.g. via illegal immigrants), and that the majority comes into the country through legal Ports of Entry either in privately owned vehicles or on tractor trailers, where it’s typically mixed in with legal goods being trucked into the U.S.

Meanwhile, a 2018 study by the Cato Institute — not particularly known for being a bastion of Democratic party stances — examined criminal activity in the state of Texas based on immigration status. Turns out, not only are illegal immigrant arrest and conviction rates not higher than native-born Americans, they are appreciably lower. The below chart shows that conviction rates for crimes (includes homicides, sex crimes and larceny) committed by illegal immigrants was about 50 percent lower than those of native-born Americans (as a percent of their respective populations). 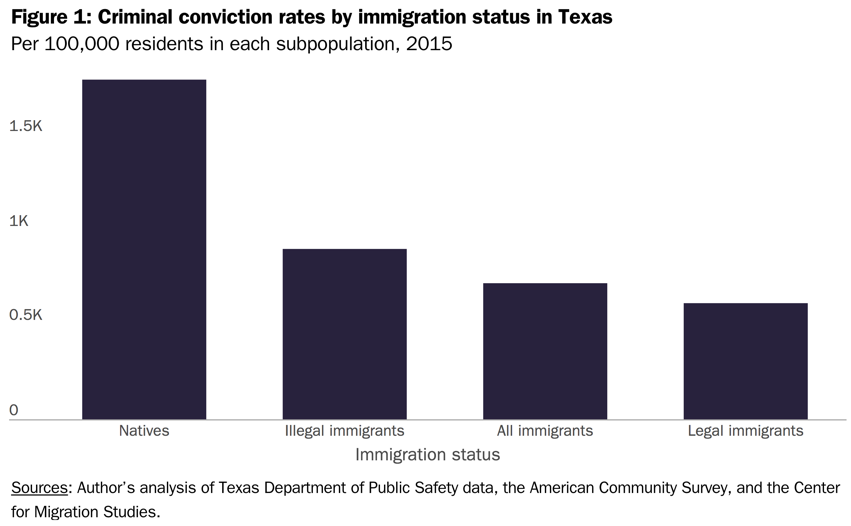 Looking at arrests instead of convictions yields a similar outcome, where total arrests of illegal immigrants for those same crimes were 40 percent lower than those native to the U.S.

In our current meme-driven culture, where many conservatives are quick to remind everyone that all lives matter, the irony should not be lost that that principle seems to step aside here for a disturbing fixation on anecdotal headline crimes from a group that actually looks to be a dramatically safer member of the community.

A couple of decades ago we clearly had a border crisis. Illegal immigrants were pouring over the border and border patrol was overwhelmed trying to control the hemorrhaging. But the sustained reduction since then to early 1970’s levels is perhaps the rare example of the public sector actually helping address a problem.

Now if the stated goal was, for example, to get illegal immigration to as close to zero as possible because it otherwise (1) creates an undue economic burden on the country and/or (2) is an unfair jumping the line over those trying to enter legally, those are reasonable assertions that would potentially win over voters beyond the campaign choir. But that’s not the conversation coming out of the White House, probably because it’s difficult to build fiery bite-size campaign slogans and chants around “BUILD THE WALL TO FURTHER REDUCE ANNUAL AGENT APPREHENSIONS FROM 16 TO 0!” No doubt it’s a bit messy, and not nearly as frothy.

So if we don’t have a border invasion crisis… and existing undocumented immigrants seem to be both declining in numbers and a much safer part of the population… is the purpose of building a wall then really just to fulfill a campaign rally promise? It feels like the answer to that is yes.

Consequently, we end up left with a situation where we’ve actually done an encouraging about-face on border security from the legitimate crisis of 18+ years ago — yet the repeatedly peddled need is to “build-the-wall.” But building the wall is undoubtedly not a well-reasoned means to some clear end, but rather the end-goal itself, perpetually requiring the salesman to navigate the thin ridge between ignorant and dishonest cliffs.