Facebook Live, the social network’s live video streaming platform, received a series of updates this week, the most notable being the ability for broadcasters to “go live” from their desktop and laptop computers. Video creators will be able to stream from their web browser directly to their Facebook Page, the company explains, which makes the system ideal for certain types of recordings in particular, such as daily vlogs, for example.

Before, Live video required a tablet, smartphone or camera setups that utilized the Facebook Live API.

For now, this feature is only available to businesses and brands with Facebook Pages, not individuals, but it’s the sort of feature that will eventually make its way to the masses. (In fact, some users have already seen it appear, but the rollout is not yet official.) It also makes Facebook Live much more competitive with YouTube, where daily vloggers often record from their PCs.

Facebook is also making it easier for Pages who have a large staff who use Facebook Live streaming. Before, only Page admins were allowed to go live, but now, admins can designate others as “Live Contributors” – a new role that will allow those people to stream to the Page at any time, with gaining access to other administrative functions. This makes sense for news organizations in particular, where journalists may contribute to Pages, but where admins may be those on the company’s social team – not reporters in the field.

Facebook profiles for celebrities, journalists, politicians and other highly followed figures with 5,000 or more subscribers will also gain access to video metrics for their public videos, both regular and live. Arriving in the coming weeks, these “lightweight insights,” as Facebook described them, will include metrics like total minutes viewed, total number of views, and total engagement (reactions, comments and shares). 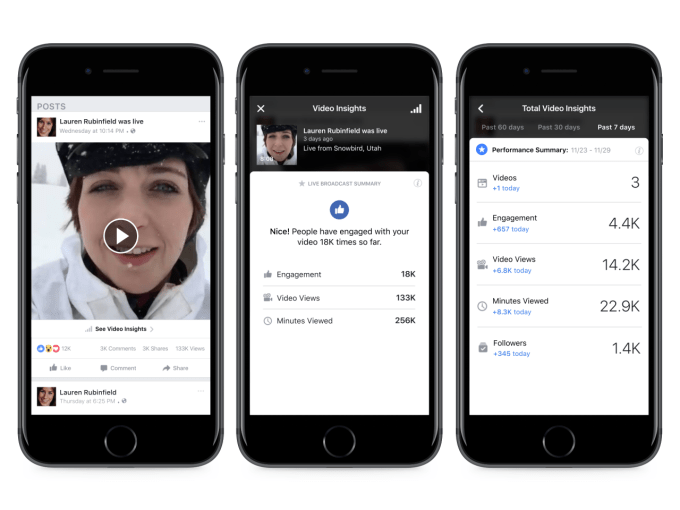 Plus, users can see aggregated insights over different periods of time, like a week, month, two months, etc. These will include the total number of video posts, engagement, total views and minutes viewed, and total number of Profile followers.

There were a few other tweaks and additions to the platform, as well, including the ability to pin comments to the bottom of a Live broadcast as a means of highlighting important text for viewers; permalinks to a Page’s video content (e.g. “facebook.com/pagename/videos”); and the ability to crosspost previously Live videos across multiple Pages.

The updates were all based on feedback from Publishers and tie in to Facebook’s broader efforts in establishing its Live platform as a competitor with larger video networks like YouTube and other social rivals, like Twitter’s live streams and Periscope. The move follows another announcement this week about a series of updates aimed at journalists and publishers, which include different ways to package stories, new business models like subscriptions, and training courses that teach reporters how to use features like Facebook Live, among other things.