Google’s somewhat aging VoIP calling service, Google Voice, is preparing to roll out a significant update, the company has confirmed. Several Google Voice users this week reported seeing an upgrade link touting “the new Google Voice” on the web version of the service, along with a link that would let them try it out. Clearly, the message was posted too early because the upgrade didn’t come through when the link was clicked.

However, its existence has been an encouraging sign for Google Voice customers, many of whom have felt as if the service has been abandoned in favor of Google’s many newer efforts in the communications space, including Hangouts, and more recently, messaging apps like Allo and Duo.

According to the Droid Life blog, which was one of the first to see the upgrade link appear, the banner popped up at the top of the screen when they logged into their account, with a message that read: “The new Google Voice is here. TRY NOW.” But when they tried it, the page just refreshed and they remained on the current user interface. 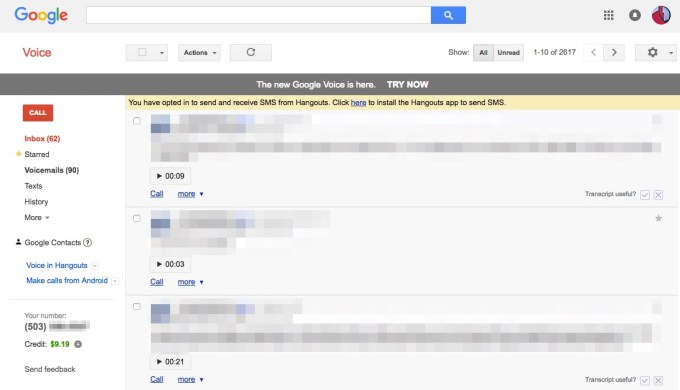 Google Voice hasn’t been updated in some time, making the product feel a bit been abandoned. Many are saying it hasn’t had any attention in years, but that’s not entirely true. It didn’t receive much attention in 2016, but before that, the last notable updates have included things like Google Hangouts’ integration with Google Voice back in fall 2014, and 2015’s update which improved Google Voice’s voicemail transcriptions.

Still, its updates have been few and far between, despite the usefulness of the service and its potential. Google’s failure to continue investing in the space has allowed other voice calling apps the ability to gain ground. Not only are voice messaging apps a popular category today, the idea to give users the ability share a public phone number that can ring them anywhere, on a line that has its own voicemail and filtering options, is now something other startups, like Burner or newcomer Listen, are handling instead.

These Google Voice rivals have succeeded in part by focusing on mobile users – an area where Google Voice has fallen behind, having not updated its iOS and Android apps since the first half of last year.

After the flood of reports, Google confirmed that it’s working on some updates to Google Voice, but declined to give us further details ahead of the launch.

Google’s strategy with regards to its communications apps has been messy, so it will be interesting to see what the new Google Voice entails. The company has a number of communication products, which seem to be in a constant state of flux.

Hangouts, for example, has just seen its API shut down, which will effectively shutter the app ecosystem on the platform for most developers. The apps that were allowed to remain have an enterprise focus instead, as Google explained to developers in an email that it’s moving away from its consumer focus.