Apple has earned the title of greenest tech company in the world for the third year in a row, according to a new report from environmental organization Greenpeace. In a new report, “Clicking Clean: Who is Winning the Race to Build a Green Internet,” Apple lead the pack with an “A” grade and a clean energy index score of 83 percent.

Facebook and Google also did well, with scores of 67 and 56 percent, respectively, along with data center provider Switch, which scored 100 percent. However, Netflix, Amazon Web Services and Samsung were found to be lagging.

Greenpeace’s clean energy index accounts for how much clean energy the companies use from renewable resources, as well as other factors, such as their willingness to make their energy consumption publicly available, and their commitment to powering their data centers with renewable energy, for example.

Because of these companies’ size, they have the power to influence others in the industry when it comes to the use of clean energy. As the report noted, Apple plays a “catalytic role within its IT supply chain, pushing other IT data centers and cloud operators who help deliver pieces of Apple’s corner of the internet to follow their lead in powering their operations with renewable energy.” 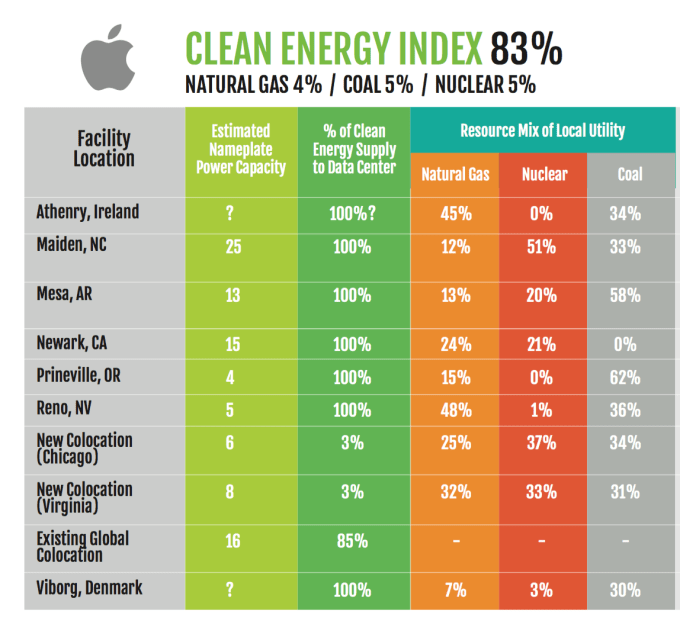 Facebook also received accolades for being the first major internet company to commit to be 100 percent renewably powered, and it continues to play a leadership role in the sector. Its five latest data centers were renewably powered, Greenpeace pointed out.

Google, too, has been taking steps toward a renewably powered Google Cloud, and is improving its deployment of renewable energy in new markets, but was dinged for being less transparent than others, including Apple, Facebook and Switch, in terms of providing facility level energy demand data.

The report called out major tech companies Netflix, Amazon, Samsung, and others. It also for the first time analyzed Asian tech giants, like Tencent, Baidu, Alibaba and Naver, which are expanding to become global businesses.

This is of particular concern for environmental organization, given these companies’ ongoing growth and expansion.

“We must see East Asian internet companies exhibiting the will to commit to 100 percent renewable energy, particularly as they expand to markets around the world,” said Greenpeace East Asia Senior Climate and Energy Campaigner Jude Lee, in a statement. 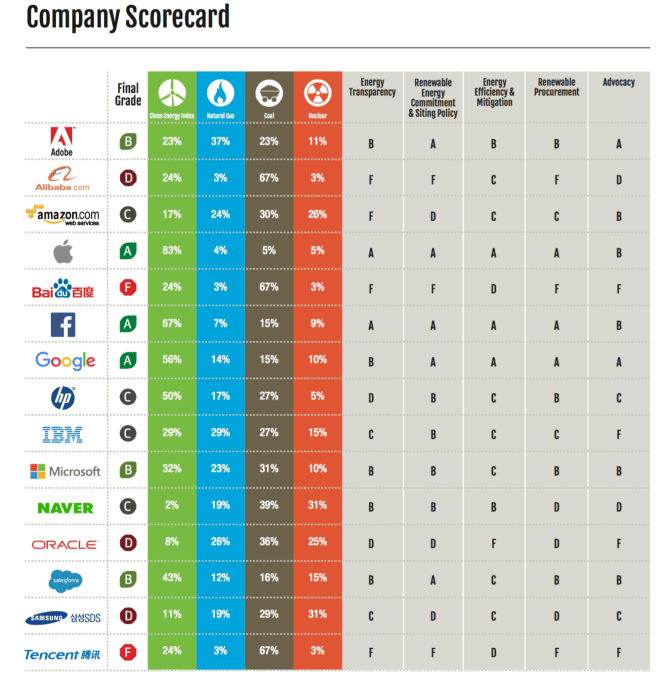 “Leading IT companies in the United States have already shown that the majority of the industry recognizes that clean power is both good for the environment and good for business. East Asian companies must step up to embrace that reality as well,” Lee added.

Meanwhile, Netflix, which accounts for one-third of North America’s internet traffic and contributes to data demand worldwide, had announced in 2015 it planned to fully offset its carbon footprint. However, Greenpeace said that it’s likely that it’s turning to carbon offsets or unbundled renewable energy credits, which “do little” in terms of increasing the company’s renewable energy investment.

“Like Apple, Facebook, and Google, Netflix is one of the biggest drivers of the online world and has a critical say in how it is powered. Netflix must embrace the responsibility to make sure its growth is powered by renewables, not fossil fuels and it must show its leadership here,” said Greenpeace USA Senior IT Analyst, Gary Cook, also in a statement.

Amazon’s overall Clean Energy Index percentage fell from last year, thanks in part to its nearly doubling of its data center capacity in Virginia – a region with little to no renewable energy options, the organization said – which outstripped Amazon’s addition of renewable energy capacity.

Amazon was also awarded an “F” for its energy transparency.

“Amazon continues to talk a good game on renewables but is keeping its customers in the dark on its energy decisions. This is concerning, particularly as Amazon expands into markets served by dirty energy,” said Cook.

However, Greenpeace did give it a nod for its increased clean energy and climate advocacy over the past year. Amazon’s advocacy with both policymakers and utility companies saw it supporting tax credits for clean energy, pushing for repeal of laws that restrict wind development, and negotiating an innovative energy management deal in Virginia, which saw the Dominion Virginia Power agreeing to integrate energy produced by Amazon’s wind and solar farm projects on the grid serving its AWS data centers.

Greenpeace noted that nearly 20 internet companies have now committed to 100 percent renewable energy. But the fight isn’t over, as the sector itself continues to rapidly expand.

“Thanks to the leadership and advocacy of companies like Apple, Google, Facebook, and Switch, we are seeing the tech industry make major strides toward powering the internet with clean energy,” said Cook.

Update, 1/13/17: Following the release of the report, Greenpeace began a social campaign to raise awareness about those companies who received poor grades for their use of non-renewable energy. For example, the organization released the video below which targets Netflix: