Facebook pulled the world back into the silent film era with its muted, auto-play videos, but its latest tool could make it easier to repurpose traditional clips. Facebook has launched a free, automatic video captioning tool to all US English Facebook Pages. TechCrunch and some other Pages only recently began seeing the quietly launched option, though Facebook responded to our inquiry saying it began rolling out the feature in October.

Powered by voice recognition software, it takes the hassle out of transcription while making it easy to edit the subtitles it suggests. That’s critical since our early tests showed frequent transcription errors. This is somewhat expected considering the tool is free and operated entirely by computers. And with time as Page admins manually enter corrections, Facebook’s system will surely improve. 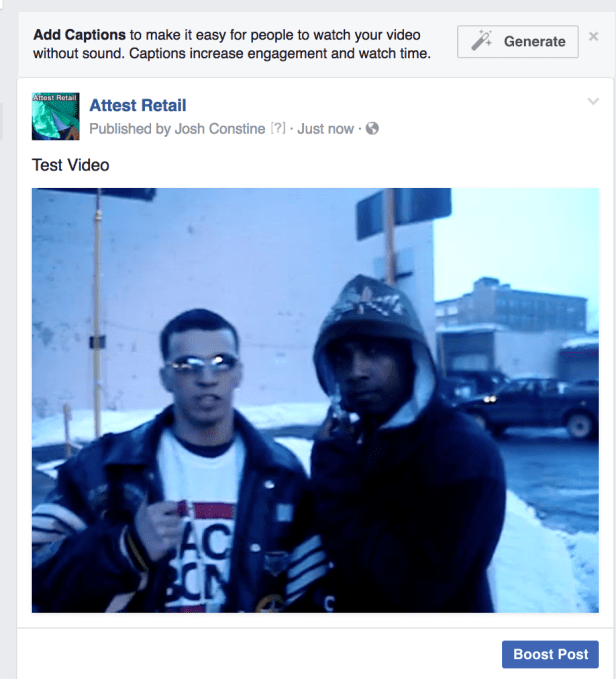 Facebook launched auto-play video at the end of 2013. We predicted it would force video producers to create clips that make sense even with the sound off. Manually adding subtitles was the best way to do that for a few years.

Facebook first rolled out auto-captioning for video ads in February 2016, in an attempt to make its advertising channel more competitive with platforms like YouTube that always play clips with the sound on. The feature could potentially expand to user-uploaded videos but Facebook refused to comment on future plans.

For now, Facebook wants to help every Page adapt to the silent-until-clicked auto-play format. That way, users in public without headphones can fully understand videos they watch muted, and viewers can make a better assessment in the first silent seconds about whether they want to watch full-screen with sound.

When Page admins upload a video, they’ll see a “Generate” button in the video editor to instantly add subtitles, or they’ll see the “Generate” button above the video in the feed. Facebook breaks down the subtitles snippet by snippet, allowing you to review the suggestion, play back that segment to hear it for yourself, and edit the captions for accuracy before saving them to the video.

Auto-play for non-advertisers could attract more semi-professional and pro video “creators” who seek to build fan bases on Facebook’s massive platform. Facebook and Instagram have increasingly pushed to lure these content-makers away from competitors like YouTube, Snapchat, and the now-defunct Vine. YouTube also offers machine learning-powered auto captioning. 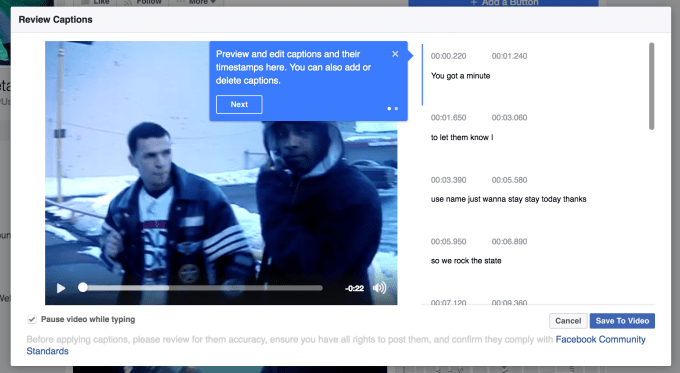 Facebook expects to hit News Feed ad saturation soon, which means it will need to boost revenue by earning more per ad instead of just showing more ads. That’s why video is so important. Getting more Pages sharing more watchable videos normalizes the content type in the feed so Facebook can slip in additional lucrative videos ads around them. And when people finish watching one clip, Facebook suggests they watch others that can include video ads.

Video may be the future of Facebook, but having tinny sound blaring out of your phone doesn’t always fit with our lives. Captions allow us to consume even when we need to be quiet.