In a test that could make News Feed more engaging and pave the way for video ads, Facebook’s mobile feed will start auto-playing user-uploaded videos in-line when they’re scrolled over for a small subset of US iOS and Android users. Videos play silently until tapped to full-screen, which feels slick. Facebook is expected to soon launch a new video ad unit, which might draw on this test’s feedback.

For now, though, auto-play is only for videos uploaded to Facebook by users to their profile or verified Page, or by bands and musicians. Brands will have to wait. Links to YouTube and other off-Facebook video sources that currently appear embedded in the feed won’t auto-play. The feature only works for videos uploaded to Facebook directly, or via apps like Instagram and others that save an instance of the video to your profile. 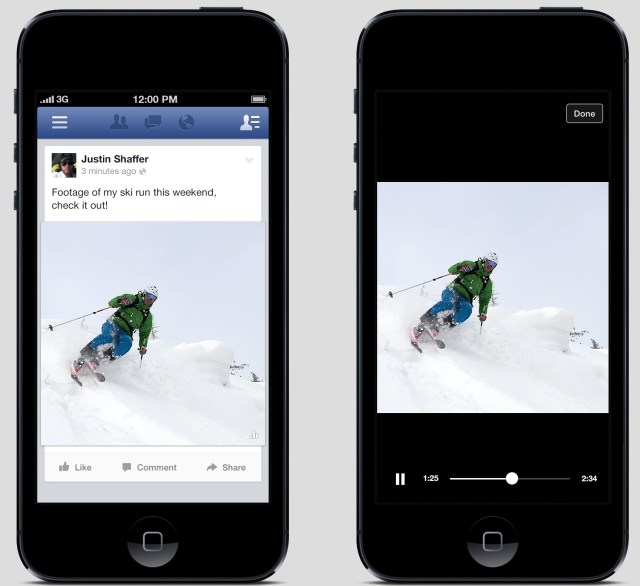 I got to play around with a demo version of the auto-play videos in the feed, and they felt smooth and natural. It reminded me of the newspapers from the Harry Potter films, where people in photos move and wave back at the reader.

As you flick up to reveal more of your feed and you come across a video, it springs into motion in-line, but with no sound. Videos loaded without much delay even on a wireless signal and played steadily while being moved around in the feed. As you scroll past and a video slips off-screen, it automatically stops playing to avoid slowing down your device or wasting data.

Though the effect looks a little bit like videos in the Instagram feed, those play with sound enabled automatically. They also require you to pick a cover frame, whereas Facebook just uses the first frame of the video. The Facebook format might encourage users to upload videos where audio is a bonus but not essential. Though the videos play silently in-line, you can tell they have sound by a little audio levels indicator in the bottom right corner. Once you tap on a video, it expands to full-screen and the audio starts playing as long as you have your device’s sound turned up. Tap out to return to the feed and keep browsing.

Only a small percentage of iOS and Android users in the US will be in the test and see videos auto-play. In an atypical move, you can opt out of the test if you’re in it and don’t like it by clicking the little arrow in the top right of a video post to stop all videos from auto-playing from then on.

The test seems like a big improvement on Facebook’s current video playback system, where users have to actively click to load and start a video. Though that only takes an extra second or two, it’s a time investment and barrier to watching videos. Auto-play could get videos more views, and therefore more likes and comments, which could encourage more people to upload videos or share them to Facebook from Instagram. That in turn could get more people spending more time on the feed, which Facebook monetizes with ads.

Nothing is changing about the video capture experience in Facebook, which hasn’t been updated in a long, long time. There’s still no filters, stabilization, clip recording, or editing capabilities. I’d bet Facebook addresses that in a future app update to bring itself more in line with modern video apps.

You can see how the videos look as they auto-play in the feed, get scrolled around, and are opened and closed in this clip.

While auto-play isn’t available to videos from brands in this test, Facebook says “Over time, we’ll continue to explore how to bring this to marketers in the future.”

AdAge sources confirm Facebook is planning a new, more heavy-handed video ad unit, but has pushed back the launch until October to make sure the user experience is good and won’t shock people or piss them off. AdAge says the video ads will appear in the web and mobile feed (today’s test is just for mobile), users will see up to three video ads a day, and Facebook will charge between $1 million and $2.4 million for a day’s distribution of a 15-second spot.

A lot could change based on the feedback from this test, but there’s a chance Facebook might use a similar slient-until-clicked format for the video ads. That might be a nice balance between the needs of marketers and users. Many people have been complaining in anticipation of the arrival of auto-play videos. Some find them distracting, and worry video ads will seriously degrade the feed browsing experience.

If Facebook can find the right design for video ads, it could capture huge amounts of TV ad spend without making you feel like you have to watch commercials to see your friends’ photos.