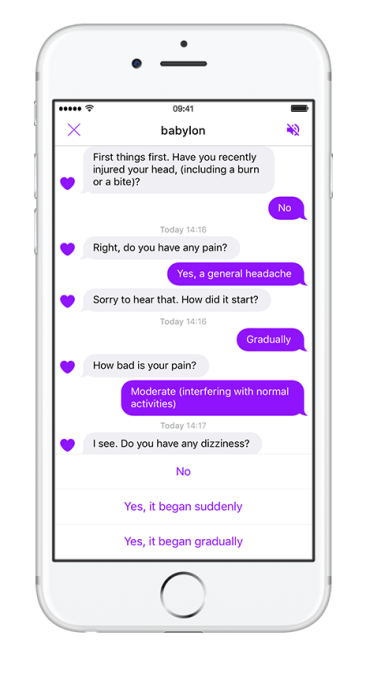 Babylon Health, the U.K. startup that offers a digital healthcare app via a mixture of artificial intelligence (AI) and video and text consultations with doctors and specialists, has scored a potentially significant trial with the National Health Service (NHS).

Working with a number of health authorities in London, Babylon will begin a six month trial starting at the end of January to offer its AI-powered chatbot ‘triage’ service as an alternative to the NHS’s 111 telephone helpline that patients call to get healthcare advice and be directed to local and out-of-hours medical services.

It will be available to approximately 1.2 million residents of north central London, reports the FT, who will get access to a new NHS app ‘powered by Babylon’ that will perform triage for “urgent but non-life-threatening conditions”.

Instead of calling a phone number and talking to one of NHS 111’s trained operators, who aren’t necessarily medically qualified but are overseen by physicians and nurses, patients will be able to chat to Babylon’s AI-powered chatbot that allows you to check symptoms instantly, and get what the startup claims is the most appropriate advice on the course of action to be taken.

That ultimately may mean being advised to seek a face-to-face consultation with a doctor or emergency care but, like NHS 111’s exiting telephone service, part of the aim is to avoid unnecessary doctor appointments or to direct patients to over-the-counter help from a pharmacy.

In a call, Babylon founder and CEO Dr. Ali Parsa told me that the trial sees Babylon plug into the NHS’s existing NHS 111 workflow and therefore, unlike the full Babylon app, only covers part of the patient journey. For example, you can’t — yet — be passed from the AI triage functionality to a video consultation with a doctor or specialist, nor can you receive prescriptions via the NHS 111 service should a diagnosis be confirmed.

(Interestingly, Parsa told me that diagnosis by AI is the next milestone for Babylon’s chatbot now that the startup, whose backers include DeepMind founders Demis Hassabis and Mustafa Suleyman, is confident its AI-driven triage has been stress-tested sufficiently.)

Meanwhile, with immense pressure on doctor surgeries in the U.K., not least out of hours, sending people to A&E who really don’t need last-line emergency care, it seems crazy that something like the full functionality of Babylon isn’t currently available on the NHS, although I get the impression that it’s only a matter of time.

I asked Parsa how this tentative trial with the NHS came about and if he’s found it hard as a startup to sell into the NHS, as I’ve heard some entrepreneurs complain. He said Babylon has been open and talking to various parts of the NHS since its very beginning and that he thinks adoption curves are the same everywhere, including the NHS.

It starts with the 1 or 2 per cent “extreme adopters,” which he says the main Babylon app has already reached, having extremely high penetration at a major global tech company in London, for example. Then comes the early adopters, then the masses. Just like any large organisation, the NHS isn’t set up to adopt technology like Babylon overnight and nor should we expect it to be, he says.

Parsa also wouldn’t be drawn on when we might see Babylon as a full NHS GP/local doctor replacement, but I heard anything but frustration in his voice, suggesting that this is one to keep a close eye on.