For months, I insisted that I wasn’t going to see Rogue One.

I was kind of a whiner about it: Yes, I did see The Force Awakens, and yes, I mostly liked it, but I kept telling friends that I didn’t need to buy a ticket to a new Star Wars movie every year for the rest of my life. I repeated that speech right up until I found out that a certain TechCrunch editor had overlooked his invite to a press screening.

So last night, despite my protests, I found myself watching another Star Wars movie. Even then, I told myself it was for journalism’s sake. I maintained the lie for as long as I could, but by the time I walked out, I had to admit that I loved Rogue One — more than Force Awakens, more than any Star Wars film since The Empire Strikes Back.

To be clear, it has its share of problems. The characters are drawn in such broad strokes that I imagine the final script was littered with Post-it notes reading FILL IN CHARACTER ARC HERE. It’s only thanks to the heavy lifting of the actors that our heroes feel like more than a generic band of ragtag rebels. (Hey, that was true in the original trilogy, too.)

But despite the underdeveloped characters, this is an exciting start to Disney’s “anthology” films, which will explore stories outside the main Star Wars narrative. Rogue One in particular focuses on how the Rebel Alliance gets its hands on the plans for the Death Star — the same Death Star plans that Princess Leia is fleeing with in the very first shot of the very first film.

Now, that might not sound terribly promising: Was anyone really demanding to know who stole the Death Star plans and why? The premise sounds particularly worrying since this is a franchise with a record of filling in its back story in the most disappointing way …

But it turns out that Rogue One‘s setup is exactly what was needed — it allows director Gareth Edwards and writers Chris Weitz and Tony Gilroy (working from a story by John Knoll and Gary Whitta) to tell a very different kind of Star Wars story.

Think about seeing A New Hope for the first time. Think, in particular, about the Mos Eisley cantina with its seemingly endless variety of aliens. Even more than the justly famous shot of Luke Skywalker framed against the two suns of Tattooine, that‘s the moment when the movie convinces you — as no science fiction movie had before — that there’s a bigger Star Wars universe beyond the edges of the screen.

In Mos Eisley, you could almost believe that every single creature at that bar had an interesting story to tell. The subsequent films are also stuffed with cool aliens, spaceships and other hints at that broader world — a world further fleshed out in the gone-but-not-forgotten expanded universe of novels, comics and video games. (There’s even a book about Mos Eisley.) 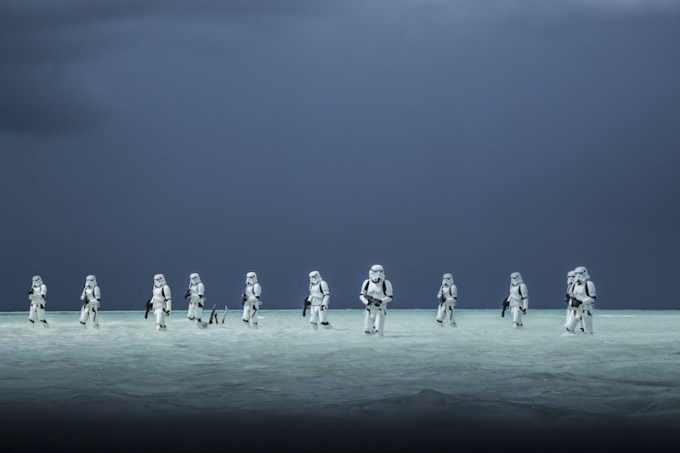 But the actual plots of Episodes I through VII suggest that there’s only one story that really matters, namely the grand battle between Jedi and Sith, Rebels and Empire — and only a handful of characters who really matter to that struggle. Everyone else is a bit player.

Maybe it’s a personal thing, but this has always felt a little unsatisfying to me, as far as space opera fantasies go. Thankfully, Rogue One isn’t about that grand narrative. It’s not about someone discovering that they’re the Chosen One destined to bring down an evil empire. Instead, it’s about people who are barely more than a footnote in the bigger story.

This seems to free Edwards and his writers in a number of ways. For one, there’s a surprising grimness to the plot. You might not think that this kind of fatalism belongs in a Star Wars movie, but if anything, it makes Rogue One feel more grandly heroic than its predecessors. The rebels really don’t know if they’re going to succeed — and even if they do win, they know victory will come at great cost.

Rogue One doesn’t look like other Star Wars movies, either. It’s certainly full of visual nods to A New Hope, but Edwards has also talked about his desire to create a gritty war movie, which turns out to be surprisingly accurate. No, we’re not talking about Saving Private Ryan here, but the action scenes have a visceral, down-to-Earth quality that puts them in a different universe from the carefully choreographed lightsaber duels of the prequels.

Everything comes together in the finale, which connects a muddy gunfight on the surface of a tropical planet with a spectacular battle in the skies above. It’s a beautiful, thrilling sequence, leading into my favorite ending of any Star Wars film.

So ultimately, I left the theater resigned to the fact that I’ll be seeing more Star Wars movies in the future. I’m sure I’ll be disappointed by some of them. But Rogue One convinced me that this far away galaxy still has plenty of interesting corners worth exploring.