Twitter’s sluggish approach to combating harassment looks even slower today as Instagram pushed its third round of safety features this quarter. The company announced this morning three new features aimed at giving Instagram users more control over their accounts and the way they interact with others on the service. This includes the ability to turn off comments on individual posts, remove followers on private accounts, and support for comment liking.

Being able to disable comments is the most significant and notable change.

On the web, many online publishers shut off comments on certain articles that are likely to attract abusive and inappropriate comments due to the topic at hand or opinion they contain. This limits abusers’ ability to take advantage of someone else’s larger platform to give their dissenting and bullying statements an equally loud voice.

Similarly, on Instagram, those whose posts are attracting outsize attention run into situations where the conversation turns sour. In the case of celebrities, they sometimes choose to shut off their Instagram account entirely to deal with the fallout. Comment disabling gives them another option.

This feature follows a recent move from Instagram that let users filter comments by keywords. While that was also an important step in helping to manage the conversation, there are times when there’s too much vitriol to allow commenting at all.

Commenting disabling was previously available for a small number of accounts, says Instagram. In a few weeks, it will be rolled out for everyone.

To access it, you’ll tap “Advanced Settings” before you post and then select “Turn Off Commenting.” You can also tap the “…” menu any time after posting to turn commenting back on, if you choose. 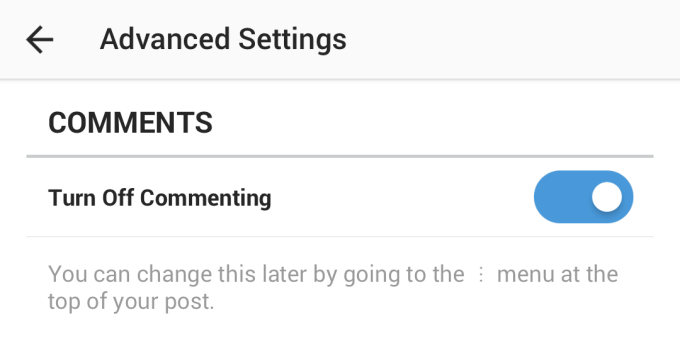 In addition, you’ll soon be able to “Like” comments on Instagram to promote positivity. Instagram says it isn’t using Likes to rank comments so the best appear first while abuse and low-quality replied gets pushed down, but the company confirms it could do that in the future.

Finally, private accounts will be able to remove people they’ve allowed to follow them rather than having to block them. This is helpful especially for those who first began with a public Instagram before realizing that they wanted to go private and use the service only with family and friends. There wasn’t an easy way to undo that earlier decision and then quietly remove those who they no longer wanted to be able to view their feed.

You can remove followers from your list by tapping the “…” menu next to anyone’s name, and they won’t be notified of their removal, the company says. 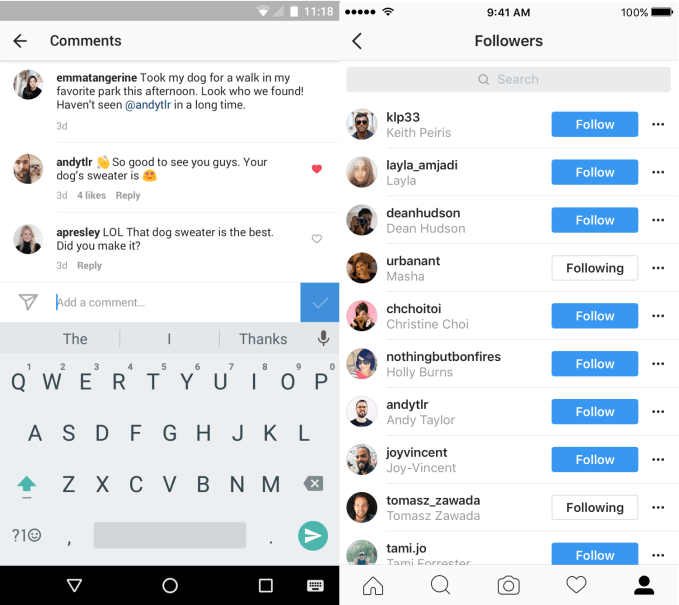 Instagram also noted today that you’ll be able to report signs of self-harm anonymously, so people are more likely to speak up if they think someone they follow might be at risk for suicide or hurting themselves. However, this feature was announced this fall, but it getting called out again as part of Instagram’s larger agenda at making its service safer and more welcoming.

Despite now being miles ahead of Twitter in terms of combatting abuse, Instagram says these updates are still only the beginning of what it has in store.