Yahoo has quietly launched a native mobile app for Yahoo Answers, one of the web’s largest Q&A sites which attracts over 3.1 million U.S. monthly visitors. The app, which was previously being tested under a different name, Yahoo Hive, was rebranded to Yahoo Answers Now at the beginning of the month. Like the web version, Yahoo Answers Now lets you view, ask, answer and track questions posed by the online community.

Yahoo Hive had been flying under the radar since its arrival on the App Store this summer. Based on screenshots, it appeared to be a reimagined version of Yahoo Answers, operating under a different brand. The app was thought to be Yahoo’s attempt to challenge Q&A site Quora with a more modern, easy-access service for posting and responding to people’s questions, as compared with its older Yahoo Answers brand.

As it turns out, Hive was actually the precursor to Yahoo Answers’ move to mobile. As part of the company’s broader mobile strategy, Yahoo has been focusing on launching and upgrading native apps connected with its many online properties, including Yahoo News, Yahoo Weather, Yahoo Search, Yahoo Messenger, Yahoo Sports, eSports, and Fantasy Football, Yahoo Finance, and others. 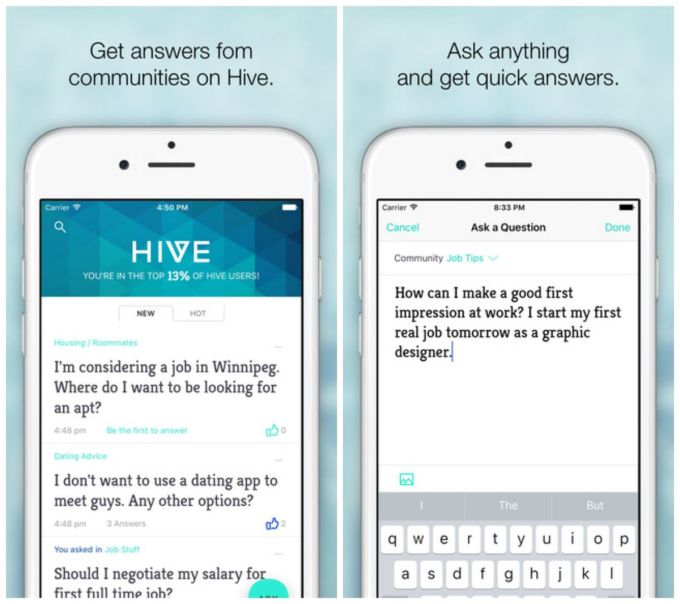 The company’s push towards mobile soldiers on, even though Yahoo’s future remains uncertain.

Yahoo has been suffering due to the fallout from the large-scale data breach, which affected 500 million Yahoo users. The revelation of the breach itself, as well as the fact that Yahoo knew about the attack for two years before it was disclosed, has impacted [TechCrunch parent company] Verizon’s deal to acquire Yahoo. Verizon has been asking for a discount of a reported $1 billion due to the breach’s impact on Yahoo’s business.

Mobile had been a key part of Yahoo CEO Marissa Mayer’s plan to re-energize the web company, along with other initiatives focused on video, native advertising and social media. The turnaround never really panned out – hence the decision to sell to Verizon.

That said, it’s interesting that Yahoo Answers was one of the last of Yahoo’s web properties to get a native mobile app version, given its still sizable user base on the web and competition from startups like Quora and even the more recently revived Q&A app Jelly, from Twitter founder Biz Stone.

Much like its newer rivals, Yahoo Answers is positioned as a way to get answers to questions that traditional web searches fail to provide. These range from niche tech support questions to those whose answers are more opinion-based, and even those you’d be too embarrassed to ask elsewhere.

Of course, that’s not to say the answers themselves are helpful or accurate – for example, the Answers homepage now is featuring a question about 9/11 where the answer the community marked as “best” states that 9/11 was inside job. Many other respondents share the same conspiracy theory in their answers, as well.

And Yahoo Answers has notoriously hosted some of the dumbest questions ever to be published online. Because of this, the site has been ridiculed for years – for example, BuzzFeed once published a listicle of 38 Yahoo Questions “that will destroy your faith in humanity.”

This is the problem with crowdsourced-built communities: everyone’s voice is equal, and that’s ultimately not helpful to those looking for true assistance or facts.

It doesn’t seem that Yahoo Answers Now’s mobile arrival will solve that problem.

Instead, it’s a simple app for using the service on your smartphone. The app has a few upgrades over the web version, like the ability to upload photos, respond with emoji (similar to Slack), click a button to say “thanks,” as well search the web for sources to include in your answers from the app itself.

Yahoo has yet to announce the launch of Yahoo Answers Now, but that’s likely because the app is still in invite-only status. According to the app’s description, interested users must first request an invite code by sending a message a particular email address (yan-invites@yahoo-inc.com).

The company has not yet responded to requests for comment about the mobile launch.

Yahoo Answers Now is currently available only on iOS.