AT&T today officially unveiled its DirecTV Now live TV streaming service at an event held in New York City. The service, which is launching on November 30, was first announced earlier this year.

Many of the details about the new service were reported already, including a starting price point of $35 per month, and a lineup of more than 100 channels, with the option to add on premium networks like HBO and Cinemax.

“It’s really important to understand, this is the foundation for how we’re going to do things in the future,” said AT&T Entertainment CEO John Stankey. “For the first time in our history, we have control of our full stack.”

DirecTV Now is entering an increasingly crowded market for streaming services, where it will directly compete with rivals like Dish’s Sling TV, Sony’s PlayStation Vue and Hulu’s upcoming live TV service. (We should note that AT&T competitor Verizon owns TechCrunch.)

In order to lure customers, these competitors are focusing on various selling points, like tiered pricing, simultaneous streams, user experience, cross-platform support, channel lineups, and other consumer-friendly features, like a cloud DVR for recording streamed TV shows and movies. In fact, Sling TV just announced its own cloud DVR earlier this morning.

DirecTV Now will also offer a cloud DVR starting next year, the company announced. However, it’s currently limited to only 2 simultaneous streams, which puts it at a disadvantage.

AT&T aims to initially entice new subscribers by offering free streaming players to those who commit to paid plans. Those who sign up for three months will get a free Apple TV, while those who pay for one month will receive a free Amazon Fire TV Stick.

Like its rivals, DirecTV Now is also competing on price point, by coming in lower than traditional pay TV services from cable and satellite providers at $35 per month for more than 60 channels, with pricing plans going up to $70 a month for 120-plus channels. Customers can pay an extra $5 per month each to add HBO and Cinemax.

Before you pay anything, there will be a free seven-day trial period, and limited DirecTV Now will be available through a FreeView mode.

It’s also offering promotional pricing which will offer its “Go Big” ($60/mo) package of over 100 channels for $35/month. And those who sign up at this rate will be grandfathered in as long as they use the service.

What’s interesting is that AT&T service isn’t only personalized to users in terms of its content and recommendations, it will use personalized ads, too.

Enrique Rodriguez, Executive Vice President and CTO of AT&T Entertainment, described this as “an entirely new cost structure for AT&T” — which means, in part, keeping costs down through targeted advertising.

When asked for more details about how this will work, Rodriguez said, while obeying existing rules around data privacy, the service will “understand what you as a consumer are enjoying and both serve content that’s likely to be relevant to you as well as advertising that will have a higher effect on you.”

He added that with DirecTV Now, “Our ability to personalize and to target the advertising to every device — not just every consumer — is significantly higher than it has been in the past.”

DirecTV Now will bring over-the-top access to most major broadcast networks except for CBS, and popular cable networks, minus Showtime. Its channel lineup will include top networks thanks to deals with 21st Century Fox for Fox’s cable networks; Walt Disney; newly-acquired Time Warner, and others.

Through the Time Warner merger, AT&T gained access to HBO, CNN, TBS, TNT, Cartoon Network, and the Warner Bros. film studio, home to the Harry Potter and DC Comics franchises. And through Turner, it has rights to the NBA, March Madness and MLB. And there will be video-on-demand options, too — 15,000 titles to start.

DirecTV Now will have some exclusive programming, which it hopes will help it draw in new subscribers. This will include its own original shows, like Taylor Swift’s 13-episode series Taylor Swift Now, arriving in a few weeks. In addition, content from Reese Witherspoon’s new production company, will arrive next year. Hello Sunshine focuses on content for women, by women, she said at the event.

However, what might be DirecTV Now’s biggest selling point — and one of its most controversial — is that AT&T subscribers can stream from the service to their smartphones and tablets without tapping into their wireless data plans. The FCC has already gotten involved here, having sent AT&T a letter challenging its use of “zero rating,” as this is called.

It’s unclear how this will eventually play out — AT&T might be asked to offer the same zero-rated wireless streaming to competitors, for example. Or it might lose the option to zero rate its own content altogether.

AT&T executives also gave a quick tour of the product. The user experience feels more Netflix-like, compared with streaming TV rivals like Sling TV or Vue. Instead of a linear guide, DirecTV Now’s home page showcases live shows as well as those you were previously watching, along with your custom Watchlist. Plus, users can set their own favorites for easy access. 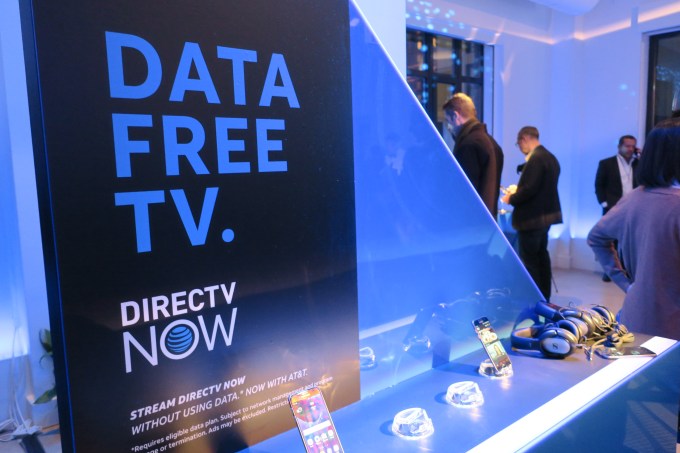 It will also feature a number of recommendations, like a row of new shows, those organized by genres (like “Kids”), AT&T Originals, content from AT&T partner Fullscreen, and more.

At launch, DirecTV Now will be available at launch via Amazon Fire TV/Fire TV Stick, Android, iOS, Chromecast, Apple TV, LeEco ecotvs and VIZIO SmartCast Displays, and the web. Next year, more devices will be supported, including Roku streaming players and Roku TV models, Amazon Fire tablets, and Smart TVs from Samsung and other brands.