Sony makes no bones about going after Bose. In fact, when the company first showed off its product in the lead up to IFA this summer, it said as much, acknowledging that the QuietComfort line is largely considered the gold standard for noise-cancelling travel headphones. It’s a bit like getting the old board together and deciding you’re going to make a better soft drink than Coca-Cola.

Of course, Sony’s got a lot to work with as one of the few mainstream electronics companies that’s actively pushing hi-res audio. It’s a solid foundation for a great-sounding pair of headphones, especially when paired with solid noise cancellation and a handful of innovative features that the king of the travel headphone mountain has yet to incorporate.

At $399, the MDR-1000X are priced $50 above QuietComfort 35, which is a bit of a stumbling point for a product looking to unseat a longtime favorite in the space. Sony brings a lot to the table here — enough to make even longtime QuietComfort devotees take a good, long look at the competition. 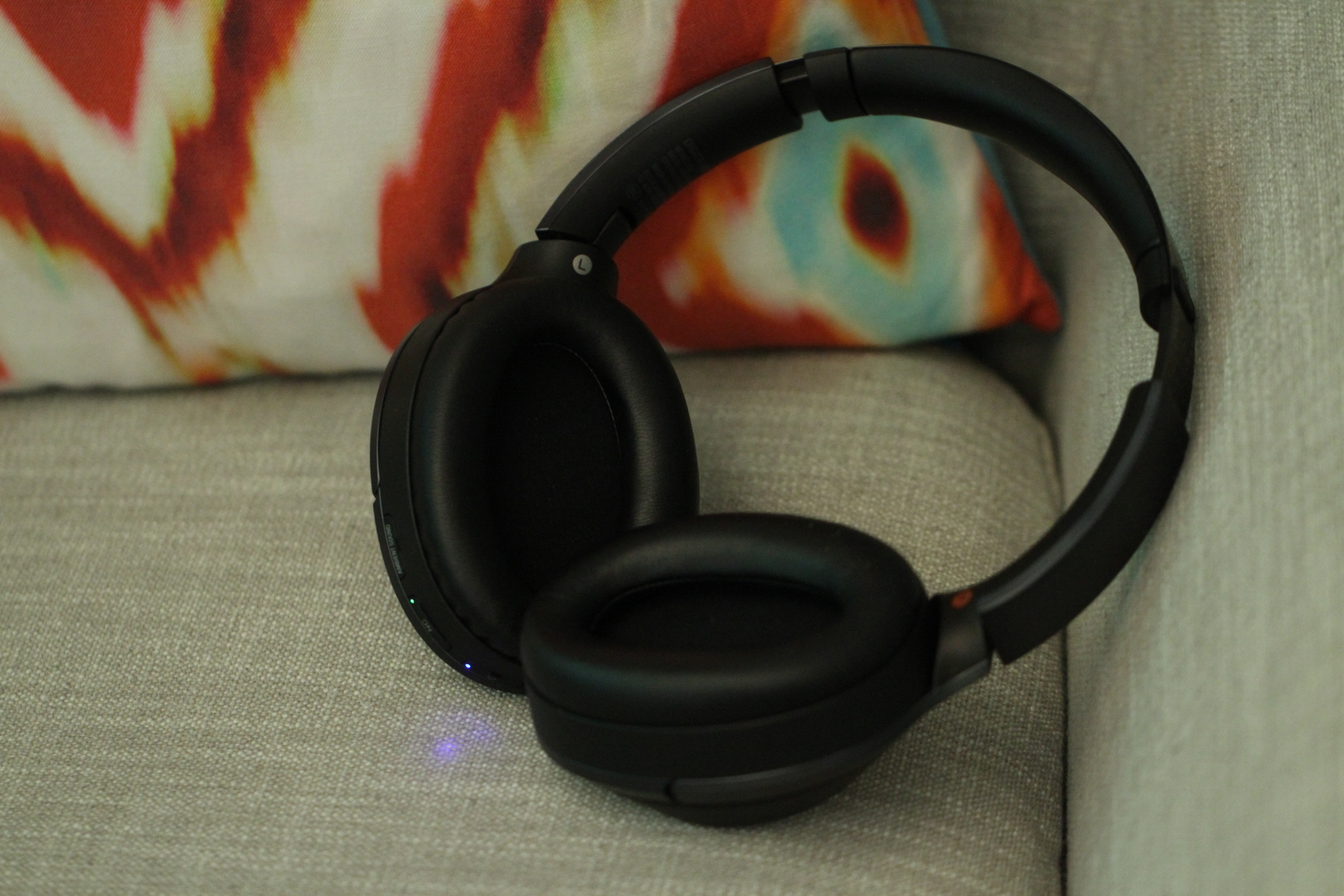 Like Bose’s headphones, the MDR-1000X aren’t designed to stand out. They’re not flashy like a pair of Beats. They’re designed to go unnoticed on a plane or daily commute. Sony’s got two color options — beige and black. They sent the latter for review, and really it’s the better looking of the pair.

The outer cups are covered in soft leather, versus Bose’s hard plastic, forming a slightly more angular design. The cups themselves don’t sport any buttons or branding, making for a slightly more minimalist aesthetic. They swivel freely and the band adjusts quiet a bit, so they’ll do a good job fitting a variety of different head sizes — an issue with the new QuietComforts, which don’t scale down enough to fit smaller heads. 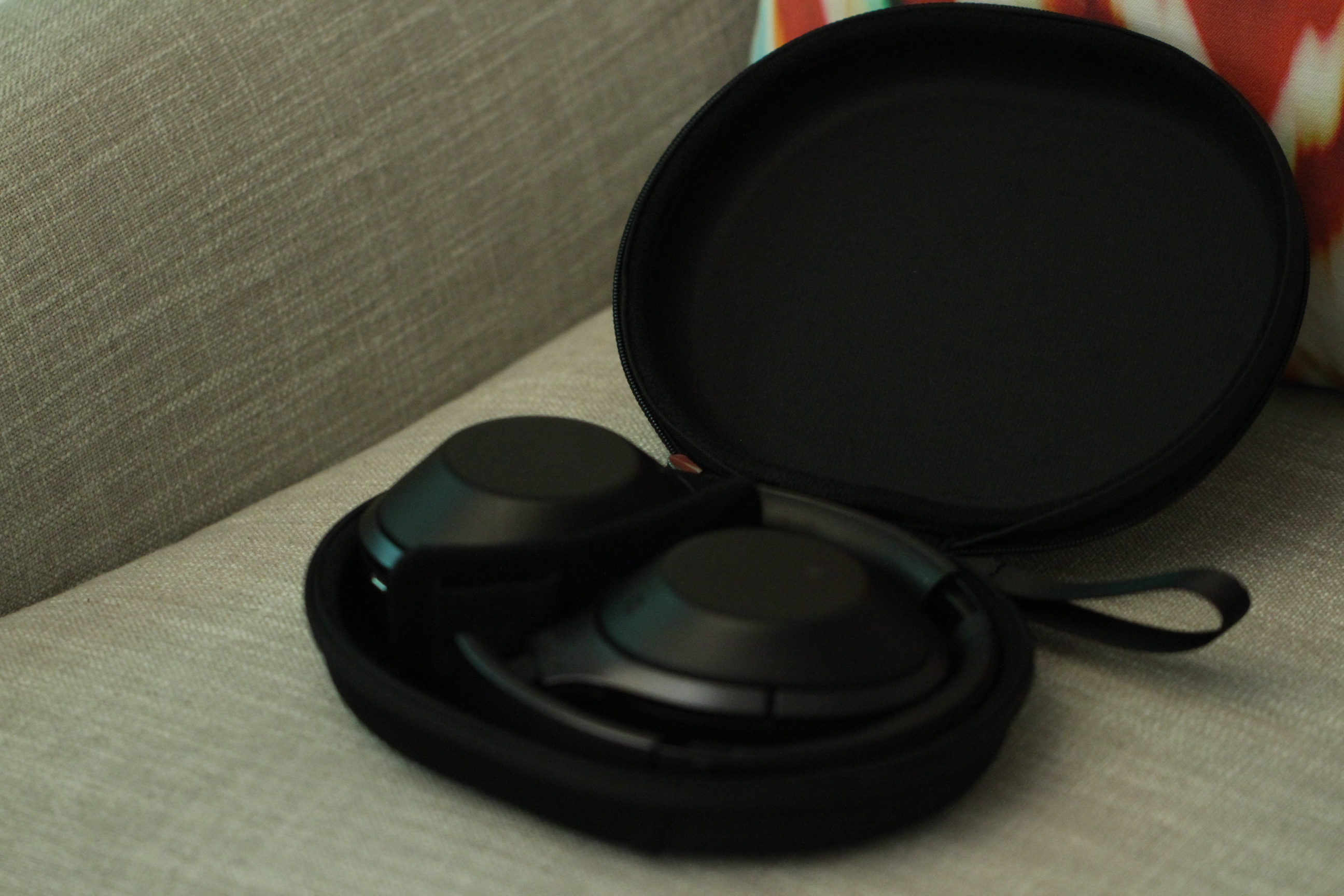 The swiveling also helps them fold up into a fairly small footprint for traveling, and the included hard case handily includes an outline for proper stowing, as that can be surprisingly tricky. You’re going to want to employ that case, as the outer leather can get pretty scuffed in transit.

At 9.7 ounces, the headphones weigh more than a full ounce less than Bose — which is to say they’re remarkably light. They’ve also got an ample amount of padding, making them quite comfortable, sitting snuggly around the ears without applying any of the pressure that can get a bit annoying after an extended listening period. 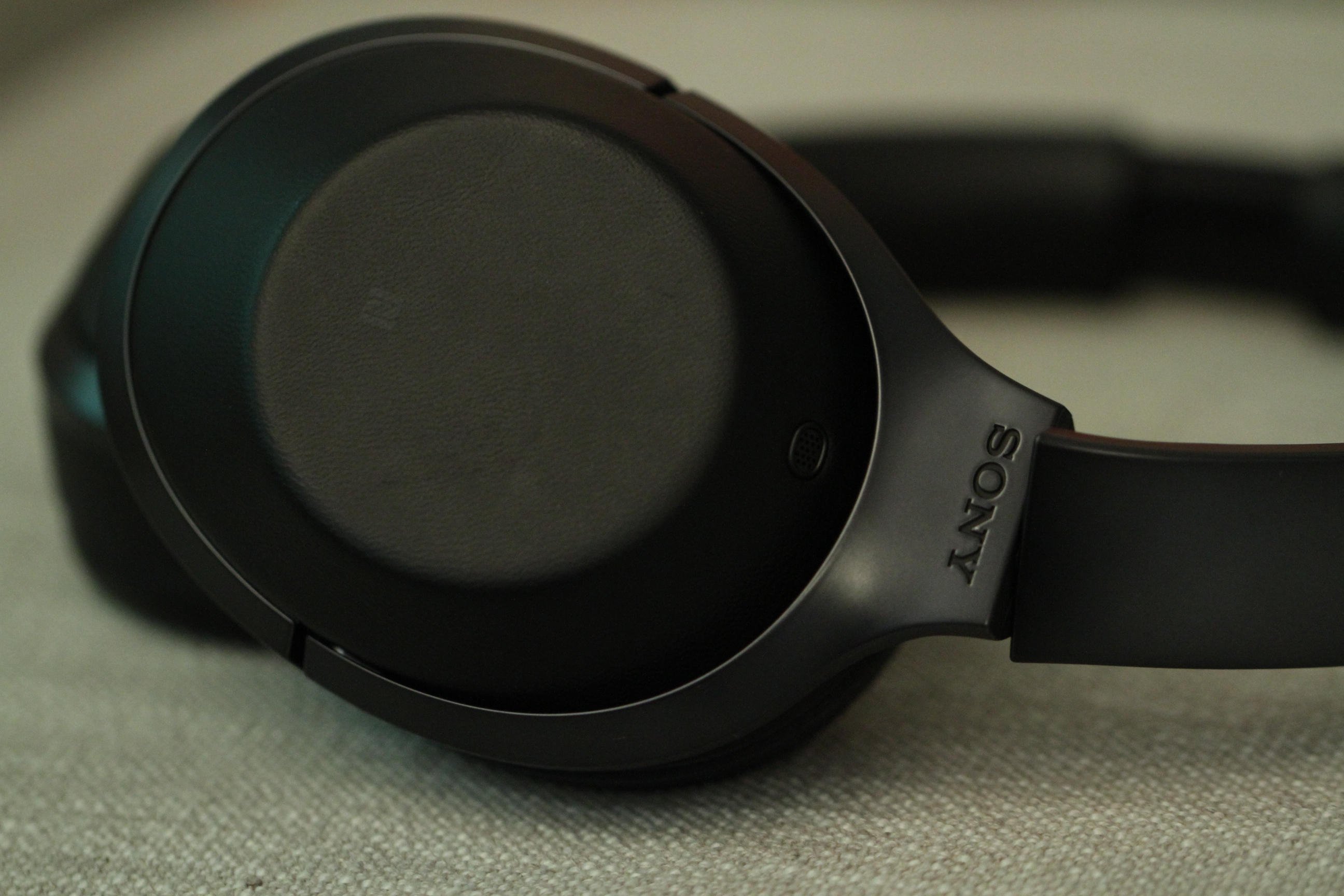 There’s a row of physical buttons concentrated below the left cup on the underside next to the padding — power, noise cancelling and ambient sound. I get why Sony wanted to move them away from the outer cup, but the thin design and slightly awkward placement makes hitting the right button a bit tough when you’re first getting used to the headphones. Just to the left of the buttons is the auxiliary input for hard wiring the headphones, should the battery conk out — though in doing so, you’ll lose access to some of the MDR’s better features.

Much of the control is actually performed through touch, similar to what Parrot offers on its Zik headphones. I’ve personally never been a huge fan of the functionality — I find myself accidentally triggering it all the time — but I may be in the minority on that one. The functionality is pretty straightforward — tap to play and pause (same for taking calls), swipe left and right to change tracks and up and down to adjust the volume. Simple.

The most interesting bit of functionality on that front happens when you fully cover the right cup with your hand, instantly turning down the noise cancelling and turning up ambient awareness, so you can, say, hear your boarding announcement. It worked well for most ambient environments, though in a few cases, such as my office, I found that it picked up some unwanted noise, such as over amplifying the sound of the ventilation system, creating a sort of rattling sound in the process.

It’s worth noting that you’ll still want to take off your headphones when having a conversation — not due to the possibility of missing anything so much as looking like a jerk. 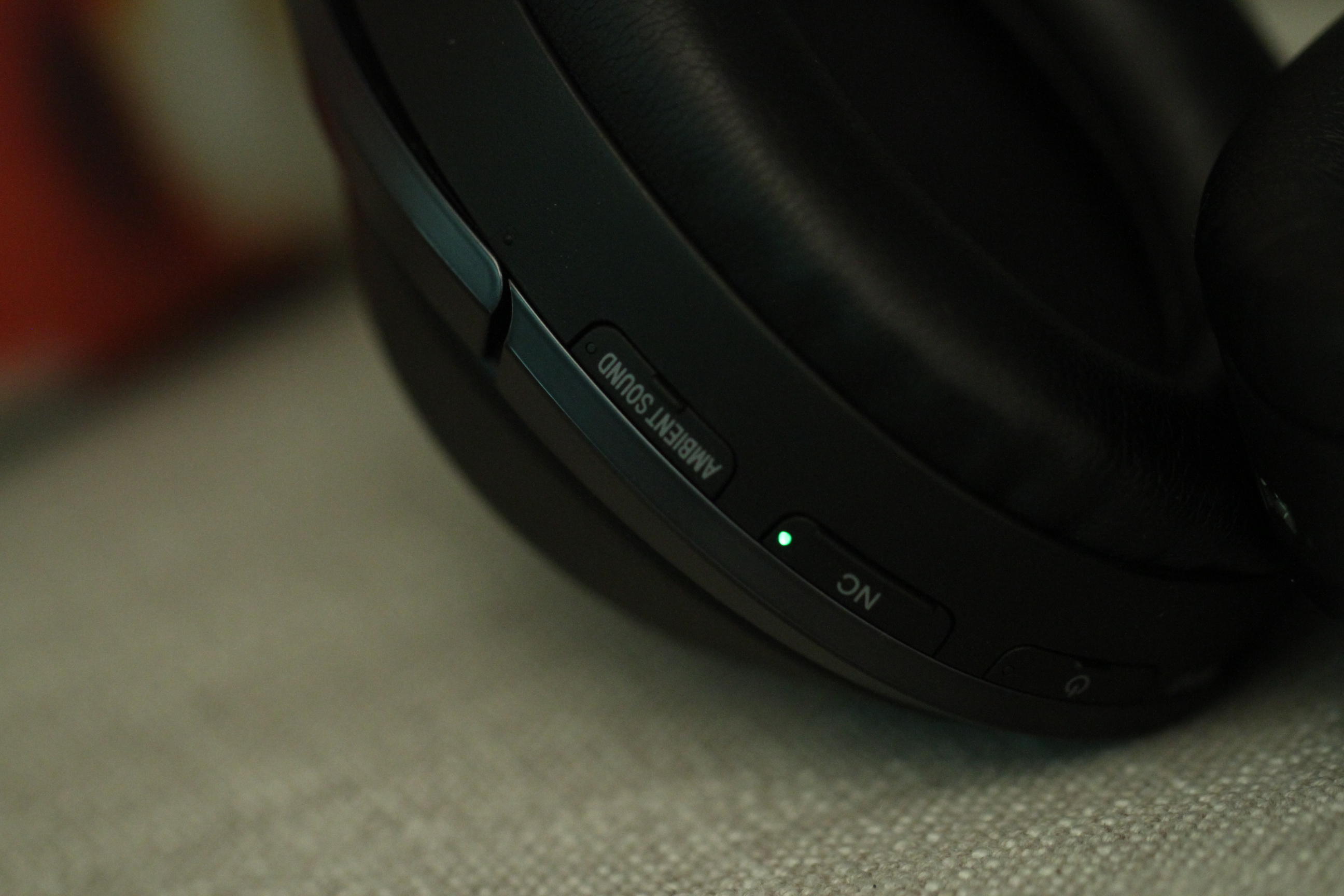 The MDR-1000X sounds great for a pair of wireless headphones. Sony’s audio prowess has created a pair of cans on par with what you’ll get from Bose. Music sounds full and true to the recording, offering full and rich bass, without overdoing it. Those who prefer their music uncompressed will also be able to get take advantage of Sony’s Hi-Res Audio offering by plugging in the cable. For most cases though, the wireless option does the trick just fine.

Sony’s also done an excellent job with the noise cancellation. It’s not tuned quite as well to plane sounds as Bose’s offering, but it does a really great job drowning out the sounds of daily life — so much so that it’s probably a bad idea to have it turned on while walking down a city street if you’re the sort who already tends to lose track of their surroundings.

Sony rates the battery at 20 hours — more than enough time to get you from Dallas to Sydney. And indeed, I was able to get through several days of use without having to charge the headphones. 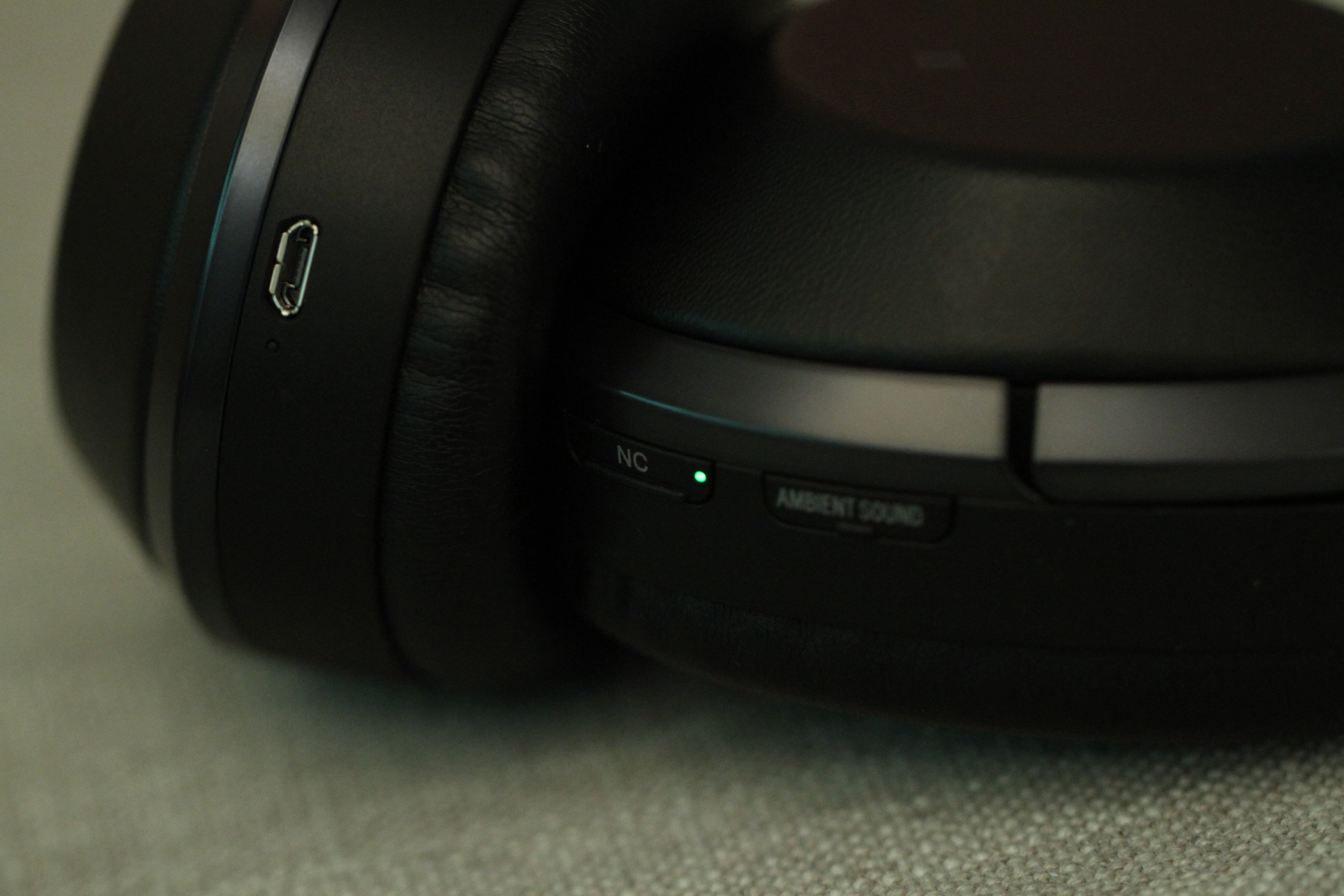 The $50 premium over Bose could prove tough when it comes to convincing consumers to switch over. But Sony’s first real shot at the QuietComfort 35 makes a pretty compelling case. They’re a well-rounded pair of headphones with great sound and noise cancelling, excellent battery life and comfortable build. They also bring some interesting features like ambient awareness to the tap. It might not be enough to knock Bose from its perch, but it should put the company on notice.