The elections may have divided America, but there’s one thing we can all agree on: we all want to buy Nintendo’s new NES Classic Edition. Well, today’s the day: the re-lease of the Nintendo Entertainment System, which ships with 30 pre-installed games for $59.99, is hitting both retailers and online stores starting today, Friday. November 11th in the U.S.

Unfortunately, the device may be hard to find. Already, some retailers have sold out, due to limited quantities.

So where can you get the NES Classic Edition at this point?

According to Nintendo, the device will be sold by the following retailers:

Best Buy:  If you weren’t in line when Best Buy opened this morning, you may already be out of luck. The retailer didn’t announce when it would take online orders, and didn’t hold a midnight launch for the console. Instead, people lined up for the device at their local Best Buy this morning, and if you weren’t among the first to do so, there’s a good chance that it’s already sold out. You can keep track of the device here on Best Buy’s website, to see if becomes available to purchase via the web at a later point. You can also use the Best Buy smartphone app to check local store’s inventory levels. 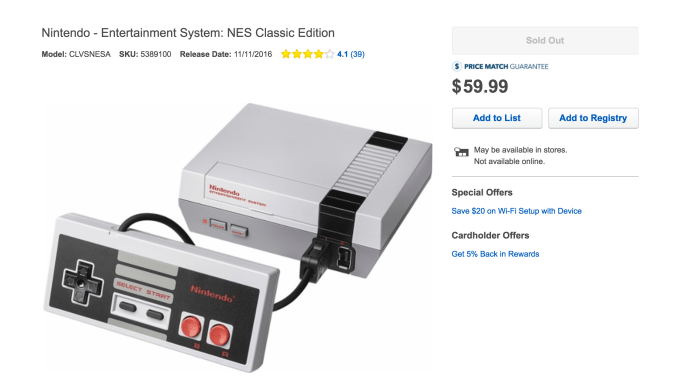 Amazon: Amazon announced early that it would begin taking orders for the NES Classic Edition at 2 PM PT on Friday. You can only order one, though, and 1-Click ordering is also not available. The company said that it expects “very limited quantities,” which basically means that you need to be prepared to drop everything later this afternoon, so you can start refreshing the product listing page until you see the ordering option appear. (By the way, you’ll probably want to hit the site early, just in case.)

GameStop: The video game retailer was also not taking pre-orders, it said on Twitter. Instead, the NES Classic will be available in stores, starting today, and online in the future. However, GameStop is offering a few interesting bundles, including one that has a second controller, another with a hardcover book (that looks like an NES Game Pak) offering a retrospective on 17 classic games, a third that offers both the second controller and book combined, and the “Ultimate” bundle which includes the second controller, book, and a Nintendo backpack.

Target: Like others, Target also didn’t take pre-orders and hasn’t announced when it will start selling the device online. Today may be likely, so keep watching. Again, your best bet for hunting this morning is to head to your local store and hope they still have some left on the shelves. You can also look up store inventory online, though it may not be kept current.

While the launch quantities are limited, more devices are expected in the weeks ahead of the holidays. Amazon announcement, in fact, said that it will “be receiving additional quantities over the coming weeks.”

Nintendo this morning also tweeted that more devices would be on the way.

There will be a steady flow of additional systems through the holiday shopping season and into the new year. 2/3

In addition, Nintendo’s website indicates to “check back soon for more retailers.” That could mean the device will become available at places like Walmart or Toys R Us, even if they’re not participating on launch day.

In the meantime, don’t be surprised to see the secondary market prices for the retro gaming system spike on marketplaces like eBay due to the scarcity. Already, some are selling the console for hundreds, or even, you know, $5,000.