A new report from mobile analytics firm Flurry out this morning shows how Americans’ overwhelming election fatigue and disinterest in continuing to follow political news stories played out during the U.S. Elections. The firm found that two of the lowest dips in news reading activity on mobile devices – where many people today consume election news and information – occurred immediately following the 2nd and 3rd Presidential debates.

While the use of news reading applications was generally up following each debate, as expected, the percentage increase dropped with each debate, Flurry found. After the first debate, news apps saw a 12% increase in usage, but that dropped to 10% after debate #2. The third debate barely caused a blip, with only a 3% increase in launching news apps. 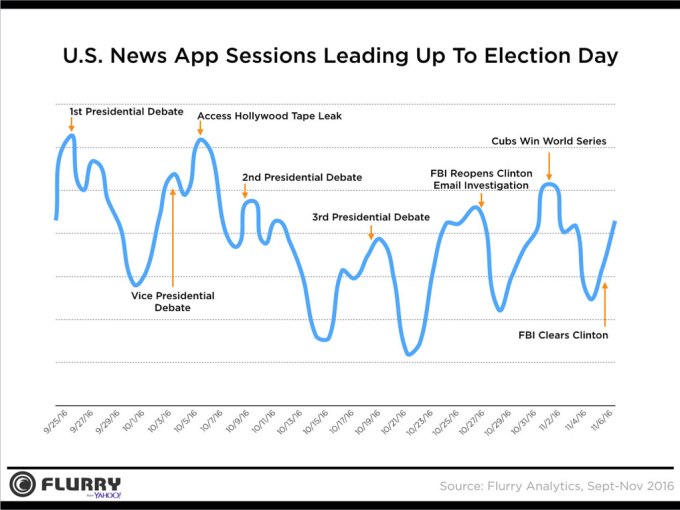 Meanwhile, the number of news app sessions declined after the first debate, outside of major news events, like the following debates, the Access Hollywood tape leak and the FBI reopening of the Clinton email investigation, for example.

The tape leak, in fact, was responsible for the largest uptick in mobile session growth (18%) during the entire election. And the only non-political spike in news activity that was seen during this time was the Chicago Cubs’ win on October 2nd, which caused news apps’ usage to increase by 10%. 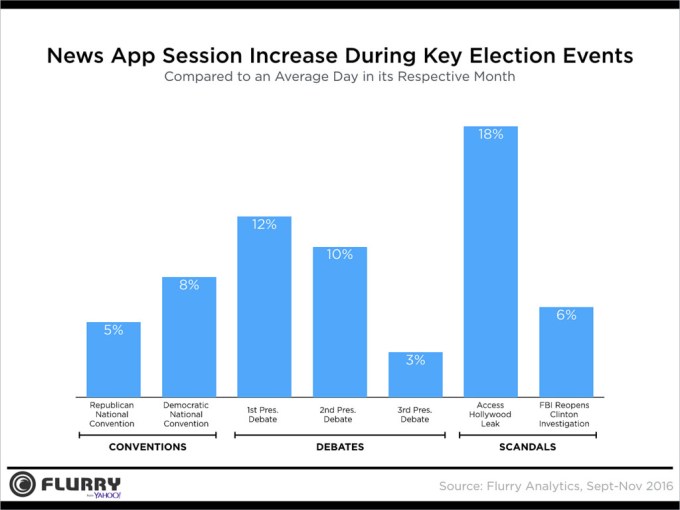 According to Flurry, these trends point to what was likely U.S. users’ overwhelming election fatigue  – something that many were complaining about on social media, as well. This fatigue could have also caused people to disengage from the news cycle, in terms of listening, reading, following up, and fact checking for themselves the topics that were discussed during the debates, compared with previous election years.

Instead, says the firm, people were “walking away from their phones and news apps, once fatigue set in.”

In addition, Flurry found that U.S. users’ attention span for following election news stories was only around 48 hours per topic. In other words, users would engage with the first story of a news cyble, but quickly grew disinterested in later developments. This  indicates a level of fatigue, as well, as people failed to read follow-ups and later reports, the firm said.