Streaming music subscriptions have not yet reached the critical mass that physical music sales and ownership once had, but some argue that this is due mainly to product-market fit, since many of the services have been built around the concept of a small pool of dedicated music fans rather than vast majority of more casual listeners.

Now, another hopeful called Electric Jukebox is entering the fray in hopes of meeting that gap. Starting first in the UK, Electric Jukebox is an all-in-one device and music service that will cost £169 for the first year and £52 (or £1 per week) after that.

Its retail partnerships include placements at Selfridges, Argos, Amazon and “a major TV network”. It’s also tied up with a number of celebs like Cheryl Crow (above), Robbie Williams, Alesha Dixon and Stephen Fry to endorse it and create their own “mixtapes” for the platform. 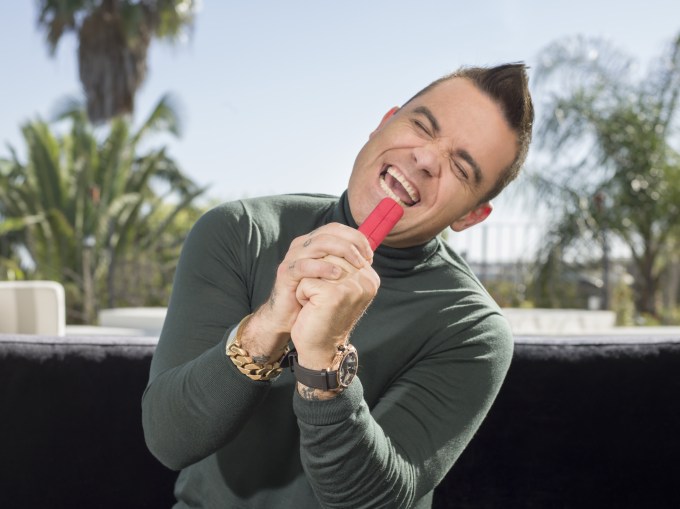 Like the big, oversized jukebox you might know from your local bar or diner, the Electric Jukebox lets you play any song you want to hear — some 29 million tracks at launch, or over 2 million albums, the company tells me. Included in its list are deals with Universal Music Group, Sony Music Entertainment, Warner Music Group, Merlin, PIAS, Believe Digital, InGrooves and more, the company said.

Unlike those hulking machines, the Electric Jukebox is something that you can hold in your hand.

For the first iteration of the product, you get two parts: a dongle that you plug into the back of your TV, and a controller that looks a bit like a Wii stick, which has buttons and a voice interface.

Using your HDMI-ready television (essentially any TV with a flat screen), along with any speaker you may have attached and your home WiFi, these devices become the “screen”, audio output and network connection for the Electric Jukebox.

The idea here is that the Electric Jukebox isn’t trying to give you a listen-anywhere experience, but one that will work in the central room in your home — the room with the TV in it.

“We’re not after a Spotify user,” founder Rob Lewis told me in an interview, noting that even the music licensing deals he’s been able to secure are predicated on this not competing against those other services, but rather growing the bigger pool.

“I’m after that 90% that do not have a music subscription today. They may be older or have less resources or not be as tech savvy. For the majority of the mass population, their only consumer electronics kit is a big TV in the living room or bedroom. We’re giving them the opportunity to buy a box and plug it in to that.”

Indeed, even in the UK — which is seen as a streaming-friendly country — only about 8% of the population subscribe to any form of digital music service, according to a recent poll by YouGov.

In that sense, the bigger challenge still seems to be getting a mass market of late adopters to pick up any music service.

Notwithstanding this bigger trend, it seems a little crazy to skate right when everyone else, and the puck itself, seem to be moving left: offering a service that intentionally anchors you to one location and doesn’t seem to have a mobile component from the start counters the bigger trends in digital media.

But you could argue that Lewis has a prescience that shouldn’t be ignored. Lewis is a serial entrepreneur who had also founded one of the early tech blogs, Silicon.com (sold to CBS Interactive). After that, he founded Omnifone, a very early player in the music streaming business that saw early success in inking deals with handset makers, carriers and labels that wanted to offer their own services, but eventually filed for bankruptcy as many of those services closed and the likes of Spotify, Pandora and Apple gathered momentum.

We found out last night that some of Omnifone’s assets have been picked up by Apple.

On the other hand, Magic Works, the startup behind Electric Jukebox, has already seen some challenges in its short life. The company had missed two other launch dates in its past, once for Christmas 2015 and then for Easter 2016.

In the event, it is coming to market with £7 million in funding from investors that include investment company Yolo Leisure as well entrepreneur and sports team owner Nigel Wray.

While the launch will come first in the UK, Lewis tells me that Electric Jukebox’s licenses are global and the plan will be to expand into the rest of Europe, and the world, in coming months.