Amazon announced today it’s bringing a version of its Prime membership program to customers in China, which will include free, cross-border shipping from the Amazon Global Store as well as no minimum free domestic shipping, the company says. The service, which will compete with local rivals like Alibaba and JD.com, will cost 388 yuan ($57.23) per year after the first year, a discounted rate.

Unlike the U.S. version of Prime, there aren’t a host of perks for Chinese customers outside of the shipping deals – instead, the main focus here is on increasing Amazon’s footprint in China by making it more affordable to buy foreign products from its site.

Amazon today doesn’t have a significant footprint in China – less than 1.5 percent of the market, according to iResearch. It even launched a store on Alibaba’s Tmall site last year in order to reach Chinese consumers.

Cross-border e-commerce is a growing trend in China, thanks to rising incomes and increased demand for foreign products. According to a McKinsey study from earlier this year, cross-border consumer e-commerce amounted to an estimated $40 billion (U.S.) in 2015, more than 6 percent of China’s total consumer e-commerce. The report also said it’s growing upwards of 50 percent annually.

Chinese Prime members will be able to shop over 4 million international products from the Amazon Global Store – a storefront the company launched in November 2014 to cater to an international audience. The localized store’s millions of products are organized across 30 product categories, including those that appeal to Chinese consumers like apparel, shoes, baby, toys, home, kitchen and beauty.

These international orders are delivered by Amazon fulfillment centers in the U.S. through its global logistics capabilities, says Amazon, and Prime members will receive those packages in an estimated 5-9 days in 82 cities. 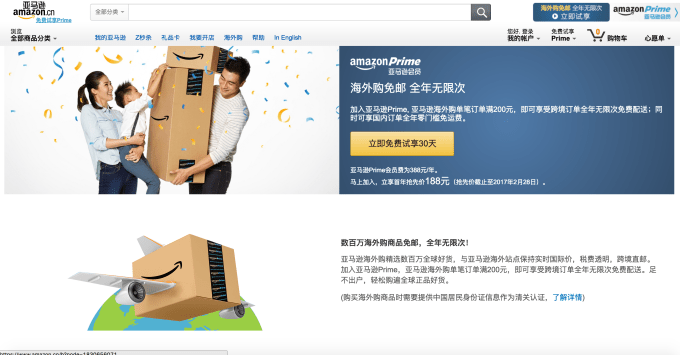 In some cases, orders may take longer. Single orders of over ¥2,000 or total orders for a citizen in a year totaling more than ¥20,000 will be routed through a customs channel which requires additional processing time, the retailer notes.

“Launching a unique program designed for our Chinese customers shows our obsession with Chinese customer needs, and demonstrates our long-term commitment to growing our business in China,” said Russ Grandinetti, Senior Vice President of Amazon, in a statement about the launch. “We will continue to innovate for customers in China to deliver more value over time.”

To kick off the launch, Amazon is discounting the Prime membership to encourage signups. Instead of ¥388, it will be ¥188 for the entire first year. A free, 30-day trial is also available from z.cn/prime.

The launch coincides with Amazon’s third Global Shopping Festival, which runs until December 2, 2016, and will include deals on over 70,000 international brands as well as Black Friday deals on the Amazon Global Store.