Copying Snapchat and capitalizing on the acquisition of MSQRD, today Facebook finally integrated augmented reality selfie lenses it calls “Masks” into its main app. Starting with Halloween-themed skeleton, witch and pumpkin masks, some Facebook users can now start to use the special effects when they go Live.

The feature will start rolling out today to iOS users in the U.S., U.K. and New Zealand, and public figures on Facebook Mentions for iOS. Facebook says masks will come to Android and more countries “in the coming months.” 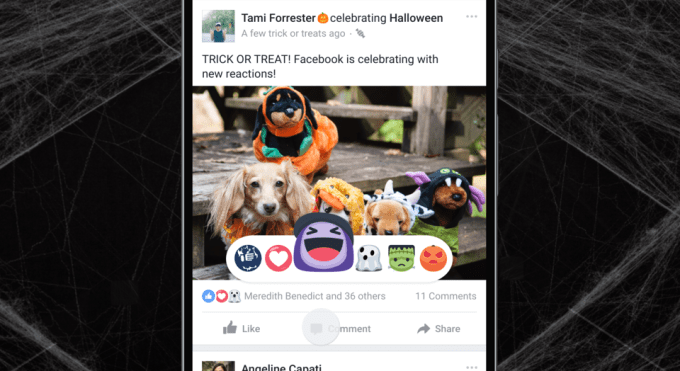 Facebook is also offering limited-time Halloween variants of its beyond-the-Like-button emoji Reactions, like a laughing witch instead of the Haha reaction, a Wowed ghost, sad Frankenstein and a mad jack’o’lantern. Users can just tap and hold on the Like button during the days around Halloween.

Facebook acquired MSQRD back in March, and briefly tested using a similar technology to offer Canadians and Brazilians some Olympic-themed masks for traditional photos and videos. In July, Facebook started letting users go Live from inside of MSQRD‘s own app.

But today represents the earnest start of a rollout of masks to Facebook proper. The feature could revitalize Facebook, which looks a little stale and stodgy compared to Snapchat, with its focus on creative tools. Masks could also make users less shy about going Live on camera, which can be a bit awkward. For the same reason, Facebook added Live color filters and is prototyping Prisma-esqe AI style transfer Live video filters that make your footage look like fine art. Though with masks, now you can actually obscure your face so you don’t worry about how you look.

To try on the Masks, users can launch a Live video broadcast with the button on their Timeline, News Feed or Page, then tap the magic wand in the upper left corner to reveal Facebook’s special effects. After selecting the masks icon, users can scroll through the options and tap on any to see them on their own face. There’s no need to tap and hold on your face to activate the augmented reality feature like Snapchat used to require.

After 12 years and everyone’s parents joining, Facebook is struggling to hold on to any sense of cool it still has from its wild college-growth days. The simple fact that it’s used by 1.71 billion people negates any sense of exclusivity or ahead-of-the-curve hipness that users might get from newer social apps like Snapchat, Musical.ly and Houseparty. 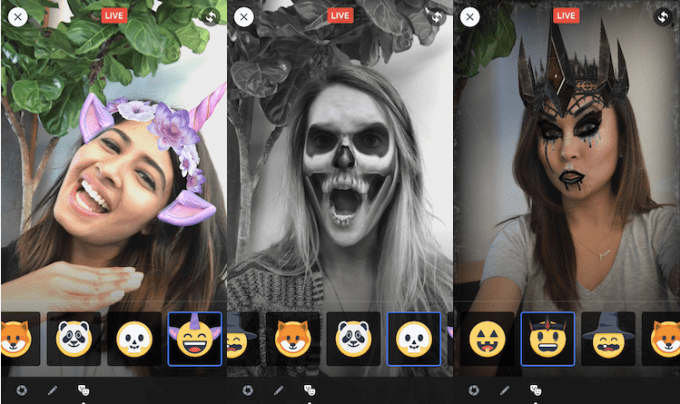 But Facebook is trying desperately to stem the shift of engagement elsewhere by showing it can offer zany creative tools, not just text status updates, baby photos and engagement announcements. A report from The Information earlier this year said Facebook had seen significant drops in original content sharing as the News Feed became dominated by Instant Articles.

The problem is people can read news in lots of places, but Facebook thrives by being the home for what you do with friends. Halloween has historically been one of the most active seasons for Facebook as everyone goes to share photos of their costumes, so it’s the perfect time for Facebook to roll out its vision for the future of visual communication.

Snapchat may have started consumer augmented reality, but Facebook wants to scale it.