Logistics may be the name of the game when it comes to e-commerce, but the IPO market can still prove to be a fickle place for even the biggest players.

Today, China’s ZTO Express, the company that provides shipping and delivery services to Alibaba among others, scored both a hit and a miss in its first day of trading as a public company. First, the company raised $1.4 billion in its IPO — making it the largest IPO of the year. Then, the company made its public debut on the NYSE — and that’s where the problems started. 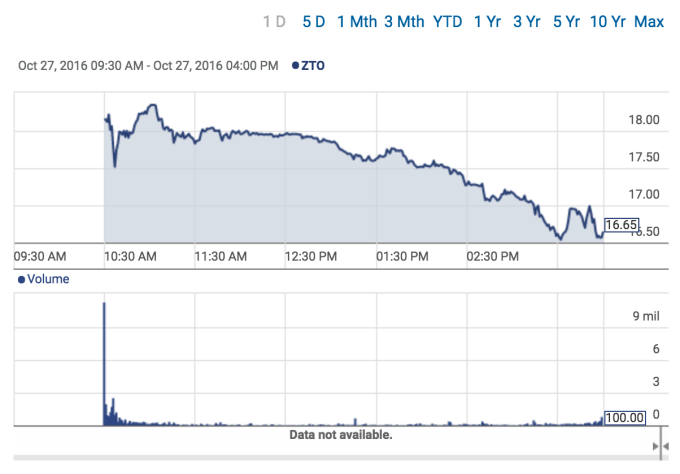 It’s a surprising performance, given the IPO size and some of ZTO’s financials. The company posted revenues for the first half of 2016 of $639 million and net profit of $115 million. And its operating margins are 25 percent — a favorable proportion compared with Fed Ex and UPS, which respectively have margins of 9.5 percent and 13.3 percent (figures provided by ZTO).

On the other hand, its current market share is 14.3 percent in China, its main market, and it is facing tough competition.

Asked about the stock’s performance, James Guo, the CFO, said the performance didn’t match up with what ZTO saw during its roadshow.

“Pricing IPOs is always very difficult,” he said. “We met with hundreds of investors all over the world over the past two weeks and investors were very excited about our story. We saw strong momentum during the book-building process, and the deal itself ended up being over 15 times subscribed.

“We priced the offering at a level that we thought would be fair for all parties involved. Of course it’s usual to see some volatility in the stock price of deal that is as big as ours, but as far as the share price goes, it’s not our place to comment. We’ll let investors in the market decide that. At the end of the day, we think that if we continue to focus on executing our strategy and creating value for our shareholders, the share price will take care of itself over the long term.”

Prior to going public, ZTO had raised funding from Sequoia, Warburg Pincus and Hillhouse.